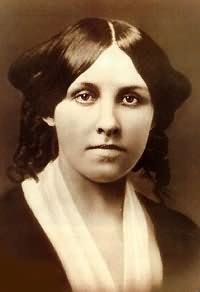 I wonder how many girls there are these days whose life-long reading careers start with Louisa May Alcott's Little Women? This marvelous book begins with these words:

"Christmas won't be Christmas without any presents," grumbled Jo, lying on the rug.
"It's so dreadful to be poor!" sighed Meg, looking down at her old dress.
"I don't think it's fair for some girls to have plenty of pretty things, and other girls nothing at all," added little Amy, with an injured sniff.
"We've got Father and Mother, and each other," said Beth contentedly from her corner.

With those four lines of dialogue, the reader is introduced to the four little women whose lives and personalities dominate the story. The reader is also introduced to each of their personalities in brief.
Well, the purpose of this post is not to go on about Little Women. It is to celebrate the lives of three marvelous authors, all of whom have one thing in common. They were born on this day.

Of course, since you are an astute reader, you will have gleaned that one of those three must be Louisa May Alcott. Though most of us would associate Alcott with New England, she was in fact born just outside of Philadelphia, PA. When she was two, the family moved to Massachusetts, where her father was involved in an experimental school as well as an early commune. Among the people with whom she interacted as a child were Ralph Waldo Emerson, Nathaniel Hawthorne, and Henry David Thoreau.

Her most famous work parallels greatly the life her own family was living. She had three sisters, and patterned her four little women on herself and her sisters. The Alcotts were poor, as were the Marchs. Her one sister died young, just as in the novel.

The second author of the magnificent trio born on this day is another author born in one country and mostly associated with another: C. S. Lewis. He was born in Belfast, Ireland. When he was a teen, he was sent to boarding school in England, a searing negative experience.

He wrote of that first encounter with England,

No Englishman will be able to understand my first impressions of England...The strange English accents with which I was surrounded seemed like the voices of demons. But what was worst was the English landscape ... I have made up the quarrel since; but at that moment I conceived a hatred for England which took many years to heal. 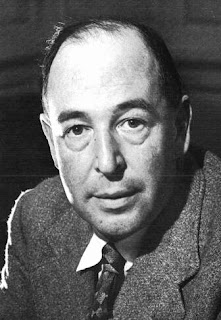 Of course, most readers would now associate Lewis with his long career both as a student and then as a professor at Oxford. There, he was part of a circle of friends that included J.R.R. Tolkein. While Lewis was a prolific writer, he is most associated today with his Narnia series, the first book of which is The Lion, the Witch, and the Wardrobe.

The last of the magnificent trio is Madeleine L'Engle. She has something in common with each of the writers above--obviously, like Louisa May Alcott, she is a woman author whose works are popular among young readers; like C. S. Lewis she is sometimes referred to as a Christian author. Her own growing awareness of religion was a sense that "all will be redeemed in God's fullness of time, all, not just the small portion of the population who have been given the grace to know and accept Christ."

I first encountered her works when our son was a young reader and enthusiastically read A Wrinkle in Time, and then continued on to other books in that series.
I realize that with 365 days in any year (excepting leap year), there are always serendipitous syzygies of authors. Today's alignment seemed particularly note-worthy. Hence, my magnificent trio celebration.
Posted by KGMom at 11:53 AM 7 comments:

So, I had a follow-up appointment today with a plastic surgeon. No, no, dear reader--I am not one of those vain folk who seek to alter their appearance. I am what I am--as Popeye said. But part of what I am is fair-skinned. German genes and all, I have red hair, blue eyes, and pale skin that only freckles (and burns if I am not careful).

That makes me obsessive about taking care of unexplained spots that appear and refuse to go away. I am careful to go to a dermatologist annually. A couple of years ago, I had a small spot under my right eye--I asked the dermatologist about it. He was dismissive--oh, it's nothing. But it stayed. I persisted, asking my family doctor about it. Eventually, when I got to a specialist who paid attention to my concern, it turned out to be a basal cell carcinoma, which had to be excised. So, obsessiveness pays off.

BUT, it can also be a bit embarrassing. Recently, I noticed two small spots on my face. Hmmm, could these be nascent basal cells again? So, I quickly made an appointment with a plastic surgeon. Last week, he did a punch biopsy (giving my husband endless amusement just to get me to say PUNCH biopsy). Today, I got the results.

A keratosis and a plain old flat wart. A wart? Really? It certainly did not look like any wart I had ever seen. But, it did embarrass me. Taking up the time of a plastic surgeon just to find out I had a wart.

Harrumph! And, embarrassed. But, but, but--I am very careful about not neglecting a budding skin cancer.

Oh, well--at least it gives me something to say at the Thanksgiving table--I am thankful that I don't have skin cancer.
Posted by KGMom at 6:57 PM 14 comments: 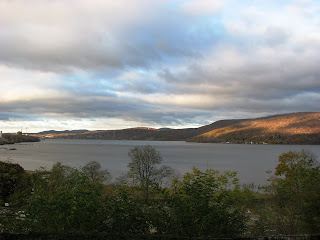 Well, not exactly moving day, but more like moving week. My blogging silence is due, in part, to my having been away from home helping my aunt move from her two-story house to an apartment on the ground floor.
For almost a week, my cousin and I have pitched in, moved boxes, gone shopping, built furniture, bought groceries, cooked meals, sorted clothing, set up computers and televisions, plugged in telephones--all in order to help my aunt in her transition to a new stage of life.
So that gets me to thinking. And, here it comes, it also gets me to offering advice.
Some thoughts on life's passages.
1. Think about where you want to be when you can no longer be where you are. The key is to plan. Of course, you can't anticipate everything, but you can at least plan. When my aunt broke her hip, which resulted in hip replacement, she could no longer live in a house where the ONLY bathroom is on the second level. 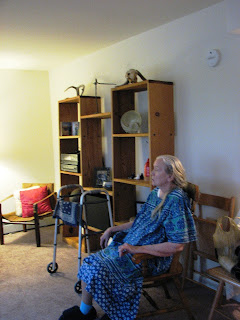 2. Take note of the things you value--the possessions that you want to take with you to the next stage of life, and even those you want to bestow on family and friends. Someone else looking through things won't know the value, sentimental or otherwise, of a particular item. THEN WRITE IT DOWN--for example, you may not get to tell someone that the strange painting of a child was a portrait your mother painted of you as a child.
3. Declutter. Just that. I recently heard an interesting guide for knowing when to get rid of something--if you haven't touched it for 2 years, get rid of it. That doesn't mean you have to throw it away: donate to Goodwill, or Freecycle it, or even sell it on Craig's List, but get rid of it. 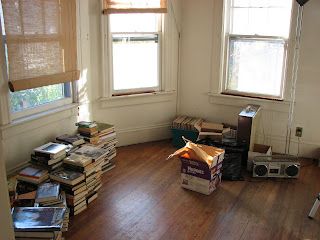 4. Accept the next stage of life as part of the journey. Of course it is wrenching to leave the spot you are now in--geographically, psychologically, emotionally. Transitions are hard. Be prepared for stages of grief. But eventually, accept that the next stage will have joys. 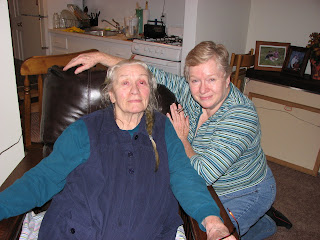 Sorry to sound so...ponderous. But, I have been doing much thinking. I hope I learn my own lessons. Maybe you have some additional thoughts on how to make life's transitions go more smoothly. 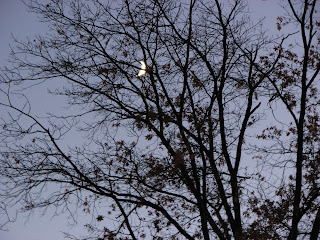 I have decided to haul myself out of the corner, stop licking my wounds, and begin to articulate some of what I have been thinking.

The genesis of my thought is this: what exactly is it about democracy (or more correctly, a republic) that the Republicans don't like that they are so hell-bent on establishing a one party (and ONLY ONE party) government in the United States?

To wit--it is no secret that Senator Mitch McConnell (pah, leaves a bad taste in my mouth to even write it) has said his goal is to make sure that President Obama is a one-term president. On that basis alone, how on the earth can anyone expect anything to change in our nation's capitol, much less get anything done?

And the reason McConnell--and others who think the same way--are so moved? They don't like the direction the country is headed. Apparently, it is their thinking that only one party is capable of coming up with programs and ideas to direct the country. Ergo--a one party system. I find that profoundly undemocratic. 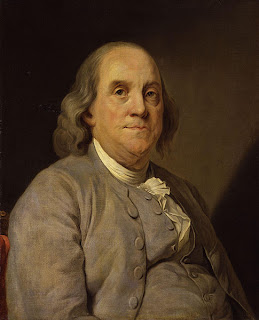 The story goes that during the deliberations of the Constitutional Convention in 1787, Ben Franklin emerged from the heated discussions. A woman encountered him who asked--well, Doctor, what have we got—a Republic or a Monarchy?

Franklin's reply: a republic--if we can keep it.

A republic indeed. While it is tempting to launch into a discourse on the nature of a republic versus a democracy, I will resist. The distinction between a republic and a monarchy should be clear. In a monarchy, the power passes from one individual to another, usually by means of heredity, without any consultation of the people.

True, nothing in the Constitution presumed a two-party system. In fact, George Washington, who was generally a Federalist, warned about the dangers of political parties. It grieved him to see the seeds of dissension that were growing in the famous conflict between John Adams and Thomas Jefferson.

In his farewell address to the nation, when he declined to serve a third term as president, Washington was prescient in his anticipation of the impact of political parties on the nation:

They serve to organize faction; to give it an artificial and extraordinary force; to put in the place of the delegated will of the nation the will of a party, often a small but artful and enterprising minority of the community; and, according to the alternate triumphs of different parties, to make the public administration the mirror of the ill concerted and incongruous projects of faction, rather than the organ of consistent and wholesome plans digested by common councils and modified by mutual interests. . . [T]hey are likely, in the course of time and things, to become potent engines by which cunning, ambitious, and unprincipled men will be enabled to subvert the power of the people and to usurp for themselves the reins of government, destroying afterwards the very engines which have lifted them to unjust dominion.

However, we do have a party system today. Over time, as political systems have evolved, it becomes less possible for a country with a single party system to exist democratically as a republic. When I think of the non-monarchist governments in the world that have a single party "system" I can only come up with examples of places where tyranny has the upper hand.

So, my petition is--save the two party system. Save the Republic.

Portrait of Benjamin Franklin by Joseph Siffred Duplessis
Posted by KGMom at 11:22 AM 13 comments: