Of course, "to dream" is the continuation of the line from Hamlet's famous "To be or not to be" soliloquy.  But, there are times when I think the "perchance" applies to the "to sleep" part.  At least, that is what it seems to be for me some nights.

And last night was such a night.

When my husband and I had both retired, and were free--like water--to seek our own level, we found we have different body clocks.  Work requirements, of course, impose a body clock on any of us.  I am perfectly capable of getting up early in the morning.  In fact, after our son, our first child, was born and I was still teaching college, I had a 7:30 a.m. class.  So I got up at 5:30 a.m. on those days, got myself ready, woke up our son and got him dressed.  Then we headed off to campus, where one of the faculty wives living on campus took care of him.  I nursed him, then headed off to class by 7:30 a.m.

But, when given the opportunity to go to sleep when I was ready, and get up when I was done sleeping, I found my natural timing was late to bed, late to rise (sorry, Ben Franklin).  I rarely wind down before midnight, and usually prefer to sleep to around 8 a.m.

As I have gotten older, a new dynamic has crept in--occasional insomnia.  It takes me a long time to unwind--make that, a L-O-N-G time.  I read at least a half an hour, then turn out the light and even then stay awake maybe another half hour before I finally drop off the sleep cliff.  I am doomed if I fall asleep a bit, then awake immediately.  That dooms me to an even longer struggle to go to sleep.  As I said, last night was such a night.  I turned out the light at 12:05 a.m., then fell asleep somewhat quickly, but awoke within 5 minutes with a tickling cough.  And that was it--I could not get back to sleep.  All told, it took me an hour and a half to get back to sleep.

My mind jumped from project to project that I COULD do--say, clean out a closet, or tidy up the basement.  But I made myself stay in bed.  However, my body seemed to think adrenalin was called for, which woke me even more.  Eventually, I got out of bed, went to where one of the cats was curled up, and snuggled up to her for a while--that is very calming.

The one thing I didn't do is read--because, frankly, reading just wakes me up.  Finally, I did get to sleep.

I find it humorous that one of the proverbial ways to drift off to sleep is to "count sheep."  My luck--I would end up shearing them, carding the wool, weaving it into yarn and then knitting a sweater--all before I finally got back to sleep.

Hope your sleep is less disturbed than mine.  Sweet dreams.
Posted by KGMom at 1:59 PM 11 comments:

A Sense of Place

I was an English major in college, and I soon learned that there is no way to be a literature major without being a student of history.  As it happens, I do greatly enjoy history.  While there are many ways to learn and experience history, for me, a sense of place adds a dimension that I cherish.

One of the benefits of traveling is that sometimes when we visit somewhere, I am able to get a sense of place that gives fresh insight.  After years of taking of family vacations mostly at the New Jersey shore, with an occasional trip to New England or parts of Canada, our daughter suggested, in 1996, that we should go somewhere abroad for our summer trip.  Thus it was that we headed off for our first "European" vacation--we did a somewhat grand tour of parts of England, Ireland, Scotland and Wales.

And that's how I had my first experience abroad of "a sense of place."  We were visiting Holyrood Palace in Edinburgh.  Our guide took us into one room and announced "...and here is where David Rizzio was killed."  Well, believe me, I took notice.  I had read the seminal biography of Mary, Queen of Scots, by Antonia Fraser, and had absorbed many of the details, including the account of the horrific murder of Rizzio, the private secretary to Mary.  Mary's closeness to him had engendered palace jealousies as well as rumors that he was the father of her child.  So a group of nobles murdered him right in front of Mary, who was pregnant.  The sense of place--that here was where a specific event in history had occurred--made my understanding of that event take on new meaning.

There are, of course, many such places around the world.  While I don't make that the only reason to see some place in the world, it certainly adds to my enjoyment.  My master's thesis research focused on the historical Thomas Becket, and how he was portrayed in two dramatic works.  So, of course, one of the places I had long wanted to visit was Canterbury.  On one of our recent visits to England, our daughter helped arrange a day trip for us to visit Canterbury.  Not only was I a Canterbury pilgrim for a brief day but I also got to stand in the cathedral that marks the approximate spot where Becket was slain by four knights who thought they were doing the king's bidding.  That actual altar in front of which Becket was slain no longer stands, but there is a candle in the floor marking the spot.

Another place where there is a palpable sense of what had happened there was in the cathedral in Worms, Germany.  We were on a family history tour in the year 2000 when we visited this cathedral.  It was to this place that Martin Luther had been summoned for the famous Diet of Worms.  (What budding history student hasn't giggled at such a thought....a diet of worms.) Luther was challenged by the pope's representative to recant his developing Protestant views.  Of course, the historical representation is Luther's famous speech:
"Unless I am convinced by proofs from Scriptures or by plain and clear reasons and arguments, I can and will not retract, for it is neither safe nor wise to do anything against conscience. Here I stand. I can do no other. God help me. Amen."

The historical record is not so clear that he actually spoke these words on that occasion, but standing in the Cathedral of Worms, the sense of place makes Luther's brave stand very real.

So it was that on our most recent trip, a cruise of the Baltic Sea with various stops along the way (see my prior post for the countries we visited), we stopped in St. Petersburg.  This is a city I have long wanted to see.  Many years ago, I read of biography of Peter the Great, who developed this marvelous city as Russia's outlet to the Baltic Sea and thereby eventually the Atlantic Ocean.  I had also read Harrison Salisbury's account The 900 Days: the Siege of Leningrad.  And, I have read many works about the last of the Romanovs--Nicholas II and his wife Alexandra.

Prominent in their lives was their youngest child and only son--who would be heir to the throne, young Prince Alexis.  He was born after his parents had borne four daughters, and they were devastated when Alexis was found to be hemophiliac.  He was frequently gravely ill, suffering the bleeding episodes that threatened his life almost constantly.  Understandably, but not helpfully, his mother Alexandra was frantic.  So when an itinerant holy man--at least so styled--came into her life in the man of Rasputin and promised he could heal her son, she was primed.  Eventually, Rasputin insinuated himself into their lives and seemingly advised them on far more than Alexis' health.  The resulting jealousy and paranoia among Russian nobility led to a plot headed up by Prince Felix Yusupov, who along with his co-conspirators, decided to kill Rasputin.

So, another sense of place--on our visit to St. Petersburg, we visited the Yusupov Palace and saw the small basement dining room (complete with creepy wax figures recreating the scene) where Rasputin was lured to his eventual death.  He did not die quickly--he was first poisoned, then shot, then drowned--none of which caused his demise.  After being thrown into a canal to drown, Rasputin managed to crawl out, after his captors had left the scene and there he died of hypothermia, freezing to death in the cold Russian winter.

A sense of place, indeed. 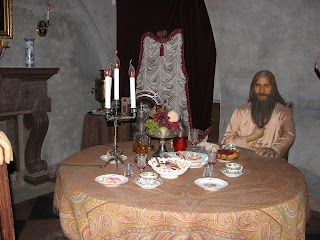 Where have you been where you had a sense of place for history?
Posted by KGMom at 12:58 PM 4 comments: 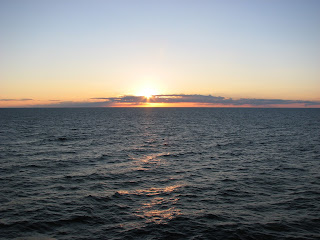 My husband and I recently took a cruise in the Baltic Sea.  We began in Amsterdam, visited--in this order--Warnemunde (Germany); Stockholm (Sweden); Tallinn (Estonia); St. Petersburg (Russia); Helsinki (Finland); and Copenhagen (Denmark).

To get to all these locations, we had three separate days where we were at sea--sailing, sailing.

When you are at seas—there’s not much to do.  However, one does get to thinking—how travel has changed over the centuries, sailing especially.  One or two centuries ago, the idea of luxury cruising would have been madness.  Ships were utilitarian and passengers had some place to go, not just cruise.

But these day, sailing on a passenger liner seems to be purely for leisure.  The 2,000+ passengers on this cruise are interested in…eating…drinking…partying…playing.
Not one of us has to work to make the ship go where it is going.

Here’s a reflection on the Curiosities of Cruising
There are 2,000 passengers, 900 crew members, and 3 meals a day.
Yet there are 9,000 meals a day prepared.
While the basics are well-provided for—food, juices, coffee & tea, there are many extras for which you pay extra.  Including--
Soft drinks
All alcohol
Internet
And all are very expensive…make that profit centers.

Not really art—we went to a lecture one day which promised “30,000 years of art in 30 minutes”—it was appalling, riddled with misinformation, including misspelling artists’ names.  Really the only point was to get us to buy some painting.

We were all handed lottery tickets at the outset, then at the end of the lecture, a “winner” was chosen.  My husband believes whoever won was a plant.  When the lecture began, there were only about 5 or 6 of us; but by the end, the back had filled up, and all the “winners” were sitting in the back.

As someone who has made 3 ocean voyages (in my youth) for transportation reasons, I am bemused at the current concept of cruising.  I can see its benefits for people who have spent a long time away from home—missionaries, diplomats, military service people—who need to re-acclimate culturally after years abroad.  Today that need has vanished--and cruising now seems aimless.   Destination bound, but potentially aimless.