Trying Hard to Catch Up and Make My Reading Goal

I set myself an annual reading goal, as I have the last several years. I have succeeded in meeting those goals, but this year I have gotten behind. See previous blog for the reason (clue: the third book in the Thomas Cromwell trilogy). 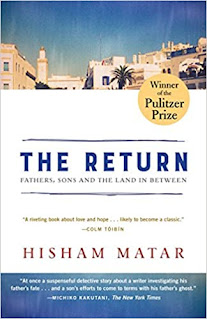 This excellent book is an aching combination of a family displaced, a father’s disappearance and a son’s quest to find his father.  The events detailed include the existence of the kingdom of Libya (1951-1969), which was ended with Qaddafi’s overthrow of King Idris I (in 1969). Libya suffered under various powers’ domination through history—including under the Ottoman Empire and under Italy’s colonization of the country. These details are necessary to help understand the deep sense of loss that Libyan patriots experienced when Qaddafi rose to power. The revolution quickly devolved into autocracy and tyranny.

His family had been living in Cairo, Egypt. His father was an outspoken critic of Qaddafi. Eventually, his father was abducted in Cairo and presumably handed over to Qaddafi’s henchmen.  It is at that point that the father disappears. Matar, who had been studying in London, begins a search that lasts several decades to find his father.

The book not only examines the wrenching loss the family feels, and that Mater feels as a son, but also looks unsparingly at the evils of overwhelming dominating power that places little to no value on the life of someone as accomplished as Matar’s father.

The Mosquito: a Human History of Our Deadliest Predator

I had a very personal reason for wanting to read this book. When I was three years old, living with my parents, my younger sister who was just eight months old was bitten by a mosquito, and developed malaria fever and died within a few weeks. That is my earliest memory. In part, because of that, I have always followed news about mosquitos and malaria and humanity’s effort to control or even eradicate this plague.

I confess that I was disappointed in the book. Rather than being a scholarly work, detailing the mosquito’s impact on humans, the book moves from antiquity to the current time, rehashing previously available information about how mosquitos have plagued human, as the cause of various disease, notably yellow fever and malaria.

The author spends a great deal of time chronicling various events where battles were decided in favor of one army or another—and then he interweaves somewhat speculatively that mosquitos decided the outcome of these battles. This tendency is particularly true in the more ancient history sections. There were chapters that were genuinely interesting, and seemed more grounded in the author’s general thesis.

Killers of the Flower Moon: the Osage Murders and the Birth of the FBI

I had seen the title of this book multiple times on various emails recommending books. The title intrigued me so finally I bought it (in e-read format).

To be fair--the writer did a great deal of research into a horrific time in American history, focusing on a string of murders in Oklahoma where Osage native Americans, who happen to have been relocated to tribal lands that were later found to have oil repositories. The resulting boom made many of these Osage hugely wealthy. In a systematic and highly calloused way, white Americans married Osage tribal members, had themselves declared the manager of financial affairs and heirs in the potential death of the Osage spouse.  AND then proceeded to systematically murder the Osage--whether by outright violence, such as shooting someone dead, blowing up a house, or by slower more subtle means of poisoning.

These events occurring in the 1920s mark a very dark time in U.S. history. In a convergence of historical events, the murders were occurring about the time that the Federal Bureau of Investigation  was being established. Solving the murders became largely the work of one FBI special agent, Tom White. Through long and arduous work, he eventually tracks down the primary culprits, brings them to justice and an eventual successful trial.

But the story does not end there.

The author gathered so much information, so many records, so many contacts that he continued with reading through the volumes of notes he acquired, interviews he had conducted and such. What he found was that the 1920 murders that were detailed in the Killers of the Flower Moon account were only a handful among possibly hundreds of Osage swindled out of their possessions, and by various means dispatched. What the author discovered is that rather than being a self-contained story tracking "who killed Anna Brown" the story was of multiple murders.

My main criticism is that as a result of pursuing two separate theses, the book begins to drag. I applaud the author's exhaustive research, but times "less is more."  The reader becomes numbed to the impact of so many murders. That does not make them acceptable, but it does make them seem routine and thereby less important.

OK--back to reading. Working on catching up.