TEAR DOWN THAT WALL

The current seemingly unending drum beat to "build the wall" inspires me to make a few historical observations.

Walls separating peoples and countries may "work" for a time, but the historical record shows that eventually they all fail, or at the very least change and no longer serve the intended purpose.

Here are a few examples: 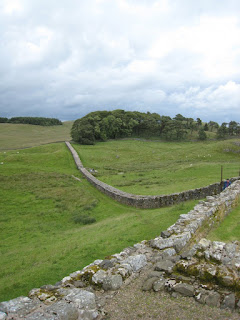 The walls of Jericho—a favorite Bible story from the OT.
Remember the spiritual—“Joshua fit the battle of Jericho…and the walls came tumbling down”?
Built to protect the city of Jericho, this famous wall is the one brought down by Joshua in the battle for Jericho. So, its intended purpose of protection failed.

Hadrian’s Wall—located in England along the border between England and Scotland, the wall was built by the Romans as both a barrier and a way to identify people coming into England, taxing them as a way to discourage immigration. The wall stood until the Roman Empire collapsed, and was then dismantled by “barbarians.”

The Great Wall of China—which was really a series of walls built by various emporers. It was designed as protection to help China fight off various invaders. While the Wall benefited China in its growth in trade, it ultimately failed to keep invaders out when Genghis Khan led his army into China.

Wall Street—built in New York City as it was developing. It was intended to separate the native American peoples from the Dutch settlers. This wall did not last for long, and was dismantled. From the wall the name Wall Street was derived—and of course, is now a center in world trade and finance.

Berlin Wall—when World War II ended, the Allies divided up Europe--the Soviets controlling the eastern zone where Berlin was located, and the western zone with England, France and the United States each controlling an area. As the Cold War heated up, the western powers united into one zone, West Germany. Berlin remained still divided into an eastern and western sector. Because of its location in East Germany, Berlin became a place where people under Soviet rule could escape to the West. Thus, to stop people from going from east to west, in 1961 a wall was constructed virtually overnight to separate the eastern sector from the western sector. In 1989, caught up in democratic changes in Eastern Europe, the East German government suddenly eased restrictions, permitting families to cross from east into west. East German citizens took that as "permission" and began to “tear down the wall." With no military intervention stopping them, the wall came down.

More descriptions of various walls through history can be found on the Internet, including here: http://origins.osu.edu/connecting-history/top-ten-origins-walls
This website is the source for many of the details used above. 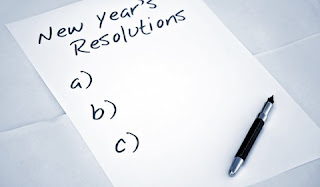 Do you make them? And do you break them?

Well, I do...at least make them and try not to break them.

It helps to focus on things doable--as opposed to pipe dream resolutions.

Of course, the resolution is kind of like a To Do List...as though, like a grocery list, you write it down, then go out and get it, then cross it off the list.
But most things worth doing are not a once and done.

How many times have you made a resolution about something involving food?


Or something involving body image?

AHA! There's a resolution I can keep. I am setting my reading goal as 25 books this year. I will try to "review" each or at least reprise.