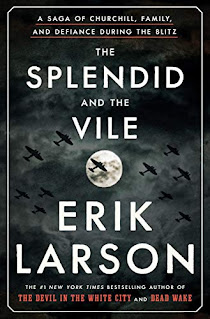 THE SPLENDID AND THE VILE

It was early May, 1940. Neville Chamberlain, a member of the Conservative Party, was Prime Minister of the United Kingdom, but was quickly losing power. Chamberlain knew he had to step down but who would succeed him as leader of the Conversative Party. Two possible choices—Lord Halifax and Winston Churchill. Chamberlain recommended to the king, who would name the next prime minister, that Winston Churchill be the one.  He was not immediately a popular choice. The opposition Labour Party despised him. But Chamberlain, who had lost the confidence of the Convervative Party, sensed that Churchill was exactly the man for the times.

On May 10, King George VI summoned Churchill to Buckingham Palace, and asked him to form a government. Churchill was elated—this is the moment for which he had been preparing all his life. But, on that same day, Adolph Hitler’s troops invaded Belgium, Luxembourg and the Netherlands as they advanced toward Paris, France.

Thus begins the saga of Winston Churchill as prime minister in England’s darkest hour. The Splendid  and the Vile begins its account with the naming of Churchill and the beginnings of the Battle of Britain. The account covers the one year time span from Churchill’s ascension to leadership in May 1940 to May 1941. Drawing on official documents and personal accounts from those who lived through the battle Larson weaves a thoroughly mesmerizing recounting of what was England’s darkest hour and Churchill’s display of precisely the kind of leadership needed for the times.

I learned a great deal from this book, which surprised me a bit. I was an English Lit major in college, so British history was a prerequisite. And I am also an Anglophile, for many reasons. Further, I have read various biographies of Churchill. Much as I thought I knew about him and the first year of World War II for England, I still learned much. And am the richer for it.

I had seen the book Euphoria when it first came out several years ago, and had in fact marked it as a book I wanted to read. But I didn't have it or do anything about getting it. Then a couple of weeks ago, the Kindle version was offered as one of the "deals of the day" books, and I got it.

Having slogged through THE MOSQUITO: A Human History, I was ready for something engaging that wouldn't take forever to read. And also something that would be more focused and satisfying.

When I was in college, I read Margaret Mead's Coming of Age in Samoa. My own feminism was developing at that time, and I loved the observations Mead recorded.

That was enough of a recollection for me to dive into Euphoria. It didn't disappoint. It was a quick read for me. No laborious over-explained passages. The characters of Nell, Fen and Bankson are inspired by the real lives of Margaret Mead, her first husband Reo Fortune, and Gregory Bateson, who was Mead's second husband.

The trio are conducting research into tribal customs: Nell and Fen studying one tribe while Bankson studies another, several hours travel away from Nell and Fen.

It doesn't take long for the electricity of relationships to heat up. Nell and Fen are married, collaborators and rivals. Bankson is lonely, isolated but dedicated to his research. His somewhat chance meeting with Nell and Fen sets him on a path, both of research but also interpersonal complications. Perhaps, not surprisingly, a love triangle forms which increasingly occupies to focus of the narrative.

It turns out that, for me, Euphoria was a quick read. But unlike some quick reads, which are soon forgotten because of their lack of substance, Euphoria will stay with me for a long time. Much to contemplate and mull. Putting the love triangle aside, there are stunning observations on cultural norms and how they are form, on uses to which research is sometimes put--not always good uses. These are the things I will think about, even as I say farewell to Nell, Fen and Bankson.
Posted by KGMom at 9:53 AM 4 comments: