Cleaning out the Clutter

Last year, I took as a new year's resolution to "clean out the clutter."  In fact, I wrote this limerick last year and posted it on my Facebook page.

Each year I make new resolutions
I think that may be my solution
To all of the clutter
That just makes me mutter
If I fail—I’ll request absolution.

Nothing like announcing something on Facebook to give you motivation...actually, not. The world of Facebook is so fleeting that, a day after posting something, you have forgotten. And then when Facebook gives you those reminders--a year ago you posted this or that--I stop and think: did I say that?

Suffice it to say, I did NOT make a rousing start on that resolution. From time to time I would bemoan my lack of initiative--which all of you will recognize as not being the SAME as actually doing something.

Then as autumn arrived, I finally started on the basement (aka where the clutter lives). Half-heartedly, nothing too strenuous. Then our Christmas plans began to turn into shape. Our children and their children would be here with us for 4 days before Christmas.

But, with our house being small-ish, where would everyone sleep? One solution--clean out the basement enough to put our inflatable air mattress there, and my husband and I could sleep there*.

I got moving. And within 3 days I had cleared enough space for an air mattress.
That meant making decisions about things LONG stored in the basement...example: the Victorian style doll house we had assembled years ago when our daughter was around 8 years old. In fact, you can still find the same doll house on E-bay, selling for several hundred dollars. We had kept it because our daughter asked us to. 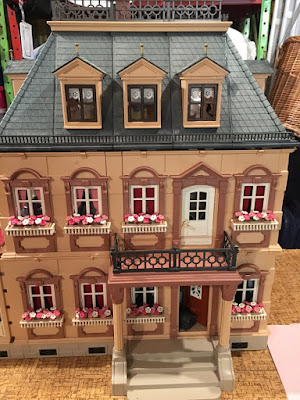 (photo taken before we began to disassemble the house)

And now the time had come to figure out how to get it to her (she lives in England). She indicated they would pack it and take it along home when they left after staying here.  Problem solved--mostly. We still had to disassemble it, label the pieces, pack them in bags, find a suitcase in which to pack them, etc.

In addition to packing up the dollhouse, I filled several trash bags.
If an item was worth offering to someone--I put many offers on our local Freecycle. And all of the items were picked up.  I am loathe to throw things away--no sense in filling our already over-filled garbage dumps.

Finally, not only was there space for an air mattress, you could actually move around in the basement.

After all the children had returned to their own homes, the basement was reassembled as a space where we store things BUT now there was space for me to have a craft table (once a desk for our daughter while she was in college). And since then, I have painted one of the little bisque village buildings that go along with the rest of the set that I had painted more than 20 years ago.

Cleaning out the clutter--actually, even though it was hard work, it was also fun. And now, I have that great feeling of accomplishment.

This year's resolution? Still thinking. I want to be careful--who knows where the next resolution could lead?