Right now, I bet any number of you reading this have already filled in the rest of the line "you must acquit".  Well, you're wrong.

I could also entitled this "Third Time's a Charm"--except that it isn't. OK, what am I talking about.
Trying to buy shoes for someone who is no longer able to be out and about to get shoes fitted.

So, here's the story. My step-mother is currently living in a nursing home. She has Parkinson's disease and, frankly, is far too unsteady for me to try to take anywhere. I  have observed staff at the nursing home when they work to get my wheel-chair bound step-mother up for a once-a-day walk. It takes THREE people--first, they attach a strap around her chest to have something to hold on to, then one stands in front of her, while two lift her up.

OK--you get the picture. No going shopping for shoes.  So, when I was informed by the nursing staff that she needed new shoes--I did the logical thing. I went to her closet and checked the shoes sizes of her existing shoes.  Size 8, or size 7, or size 9. Maybe 9 1/2 -- all were in her closet.  She also informed me she has a narrow foot.  My solution--take a piece of paper, have her "stand" on it (remember, with three people helping her up) and I trace around her barefoot. 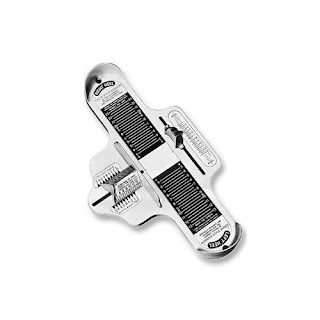 Off to the store I go, and the shoe salesman goes along with my placing the cut-out foot shape on the shoe fitting device (it's called a Brannock Foot Measuring device, for all you purists out there).  And he announces size 8.  I am skeptical, so I decide to go up a size, and I buy an 8 1/2 size shoe with a velcro strap closing.  Back at the nursing home, the shoes seem to fit.  But within a week, I hear from one of the nurses that the velcro strap has "broken"--too tight. But, the nurse very kindly sews the strap back on.  That works for another few weeks, but then my step-mother's one foot gets irritated.

So, off to buy another pair of shoes. This time I went to size 9 and bought a pair of clogs. Well, yes, they fit, but my step-mother complains that they fall off.  I am trying to visualize this for someone not walking, but nevermind.

I return those shoes, and get the exact same shoe in a size 9 1/2.  Yesterday, I delivered these to the nursing home.  And then I waited--for a phone call: do they fit or not?  Today that phone call came--no, they are too tight.

The moral of this story:  If it doesn't fit, you must buy another pair.  (I know, I know it doesn't rhyme, but it makes more sense than the original quote.)
Posted by KGMom at 1:45 PM 4 comments: 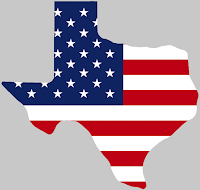 ... in the state of Texas (not Denmark, for all you Shakespeare junkies who finished the line).

Of course, I am referring to the recent death Associate Supreme Court Justice Antonin Scalia.

This is the story of his death, in brief, as we know it today. Antonin Scalia had flown to a private ranch in Texas, on a chartered plane with a friend (unidentified) who paid for the plane. He was to stay at the ranch to do some quail hunting. Apparently, Scalia liked hunting.  In fact, retired Supreme Court Justice Sandra Day O'Connor reportedly said--take Scalia hunting, and he'll do anything for you.

The day of his arrival he was tired--having just returned to the U.S. after an overseas trip. He joined the other guests for dinner, and then retired early. The next morning he didn't come to breakfast, and after a time, the host went to find out why. That is when Scalia was found dead, on his bed, in his pajamas lying in complete repose (according to the host). Now, since Scalia was dead, someone had to make that official pronouncement. So, a local county judge was called, but was too busy to come. SO another county judge was called, who first talked to law enforcement authorities, and then she pronounced him dead.  No autopsy, no careful review of the room where this death occurred (in fact, there was a photo of the room complete with rumpled sheets on Washington Post).

Well, what a curious story.

But it gets curious-er.  And questions pop up all over the place, like popcorn on a grill.

Why no security for Scalia? Answer--he had dismissed or eschewed his usual security (provided to all Supreme Court justices by the U.S. Marshall Service).

Why no on-site review of the scene by someone in authority? Answer--well, it was the weekend and it was difficult to get anyone to the ranch. But the people on-site gave a description to the authorities, Oh, that's good enough for me (though I doubt it would pass muster in NCIS).

How did Scalia appear when he was found? Answer--according to John Poindexter, owner of Cibolo Creek Ranch, who found Scalia's body, "we discovered the judge in bed, a pillow over his head. His bedclothes were unwrinkled. He was lying very peacefully."

Who was Scalia with? Answer--um, a friend. But if that friend's name has been revealed, I have yet to read it.

Who paid for the trip? Answer--um, a friend. Not Poindexter, the owner of the ranch who normally paid for all his guests who visit but not for Scalia. Oh, and the cost for one person--about $550 including meals.

Would Scalia have had to disclose such a gift? Um--no.

Why no autopsy? Answer--ah, now we get to it. Because the county judge who made the death pronouncement (remember, without seeing the body) decided there was no need. And when Scalia's body was taken to the funeral home, the people there insisted Scalia's family did not want an autopsy.

But I think I'll just head off to begin writing my Shakespearean tragedy. About a mysterious death. About a death that seems to be one thing but might just be another...who knows? About a ghost that will haunt us with all these poorly answered questions. 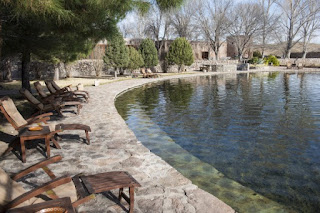