It's Christmas! And it's summer!

A recent blog by a childhood friend of mine (read it here) set me to thinking about my earliest memories of Christmas.

Long time readers of this blog will know that I grew up in southern Africa (what was Northern & Southern Rhodesia, now Zambia and Zimbabwe respectively)--so no Victorian snowy Christmas memories*.  Instead, my Christmas memories are of summertime celebrations, with Christmas and summer holidays all being wrapped into one time off from school.  School in this case also meant boarding school (as the mission station where my parents were was at least a half a day's travel from the nearest government school).  With a school year that ran from January to December, the summer break fell in December.  So of course that meant the boarding school closing, and my coming home.

It is difficult to convey to someone who has never boarded away from home for any length of time what coming home means.  Off and on, in this blog I have written about boarding school--mostly my memories are pleasant.  I recall one or two friends' names. I recall good times with school activities--participating in sports, drama productions, as well as classroom work.  But what I most remember is how Christmas festivities in the city of Bulawayo helped set the mood for Christmas.  I particularly recall the carol singing that was held in a municipal stadium--all of which helped me amass a vast repertoire of Christmas carols.  One of my favorites was "Good King Wenceslas" with  men and women singing alternate verses--men taking the parts of the king, and women the parts of the page.  Oh, my--memories flood back.  But, I digress somewhat.

When Christmas holiday and summer vacation began, all boarders returned to their homes for a 6 week vacation. That time was filled with many little bits of activity that still resonate in my mind.  I previously wrote about the Christmas picnic adventure--of course, Christmas in the summer means picnic.

Caroling was not confined to the Bulawayo municipal carol sing.  Many missionaries were quite good singers, and of course we sang in four part harmony (still my favorite way to sing...).  I do recall getting up early in the morning, on Christmas Day, and going out caroling singing "Christians Awake! Salute the Happy Morn).   As a young adolescent, I found it highly amusing to be serenading with a Christmas hymn early on Christmas morning.

Christmas also meant that missionaries from nearby missions would gather at one of the missions.  The emphasis was not so much on exchanging gifts as enjoying time together. However, there was one year when some missionary (I don't know who, but it sounds as though my mother--who could be mischievous--had a hand in it) decided to give everyone a gag gift.  Now, I acknowledge you would need to know the missionaries in question to appreciate the humor. But here are some of the gifts given. One was a small planter with a bean plant sprouting in it, along with ceramic PIG salt and pepper shakers.  The missionary receiving this had frequently lamented the blasted pigs who always got into the garden and consumed the beans, or at least broke the budding plants. Another gift was a straw man--a shirt stuffed with straw, and trousers likewise, with a cloth head and a placard that read "a good man." That was given to an unmarried missionary woman who kept hoping--and expressing that hope--for a husband.  At least that's what my childhood memories say we did.

This time of year does prompt us all to reflect and revel in memories.  If those memories--and certainly my hope for you is that they are--then we return to them again and again.  I am reminded of that fact when I realize how many times I have written about Christmas here, even repeating some of the same stories.  But that's what we do, isn't it? We recall and share.

*Oh, my little opening comment about no snowy Victorian memories--I have a theory that many of "our" Christmas memories are shaped by "A Christmas Carol" or by Currier and Ives prints.  We see gaily decorated Christmas trees, complete with "candles" which Prince Albert from Germany helped popularize in England.  And we talk about a white Christmas. When it snows, it immediately kicks us in celebratory gear.  But these associations do NOT happen when it's Christmas and it's summertime.

Merry Christmas to all--whether near or far, whether north, south, east or west.

When the neighbor boy, whose family lives in the house behind our house (our backyards meet) was just a toddler, his grandfather gave him a pet rabbit.  The boy named the rabbit Hoppy.  For years, Hoppy lived with this family--they had a small outdoor hutch with a run about 2 feet long, and a small wooden box at one end. The floor of the hutch was a heavy metal mesh, about 1/2 inch squares, so he had no place (except inside the tiny wooden box) to put his feet down without his claws going through the wire

Hoppy was occasionally let out of this small living space to hop around in their yard, but if he refused to come back to the woman of the house when she called, she claimed he had "an attitude" and would scold him.

They fed him erratically.  Usually he had a dish of rabbit food--plain pellets--and sometimes iceberg lettuce or a carrot or two.

Then came winter.  They covered his hutch with a blue nylon cloth that sailed and billowed in the wind.  The hutch was next to their house, so that was some protection.  The next summer, they moved his hutch to the top of the hill, which was where our yard meets theirs.  That's when Hoppy and I became--shall we say--involved.  I began taking him various food treats--carrots, bits of darker green leafy vegetables, occasional Cheerios.  And I took him fresh water.

When the next winter came, the hutch was still at the top of the hill, where lots of wind blows by.  The blue cloth was still there--but that was all.  So we (by now my husband knew of my concern) bought straw and stuffed it in the wooden box to give him some warmth.  That winter, there were days when my footprints up the hill through the snow were the only evidence that anyone bothered to feed him.  So I tried to go to Hoppy's hutch everyday to make sure he had food.

When the rabbit hutch began to fall apart, I offered our neighbor that we would buy a new rabbit hutch.  Our neighbor's response--why don't you just take the rabbit.  You pay more attention to him than we do.

That was all I needed--that evening Hoppy had a new home!  We immediately bought him a new larger hutch, and a good supply of rabbit food and timothy.  In a few days, we began assembling an outdoor play yard for him, which eventually became two circles of fencing each about 6 feet across, with an interlocking passageway--a much wider area for him to explore.  Eventually, we figured out how to rig a cover for rainy or snowy days.  Finally, we put plastic around the outside on the side where wind blew in, leaving the other side exposed.

The capstone touch was when we bought not one but TWO heating pads--one for in his hutch during winter, and one for in the play area.  The play area now had straw everywhere, clumps of timothy here and there, several overturned boxes, as well as food and water every day.  Every morning we got him out to play, and every evening we put him back in his hutch to sleep.  He also got fresh food in the evening that by now included carrots, apples, arugula (a favorite), broccoli, cauliflower, and other tidbits that I would try.

Thus Hoppy became our accidental pet.  I had no thought of ever having a rabbit, and do not plan to get another.  I certainly would have preferred that his first owners had litter trained him--but since they hadn't and had kept him outside, his entire life was lived outside.

So, why the past tense verbs you may have noticed?  About a month ago, it became clear that he was eating less. Hoppy also got very picky about food--some days eating one food enthusiastically and the next day rejecting it completely.  He stopped eating arugula quite suddenly.  He limited his fresh food choice to apples.  Then, he began to not eat much at all.  And then he stopped eating.  I knew enough that any amount of time a rabbit goes without eating is not good.  As Hoppy had never been to a vet, and was at the advanced age (for a rabbit) of 12 years, I suspected his life was nearing its end, so we chose not to try to prolong his living.

Tonight, when we went to get him from his outdoor play yard, he was lying on his side, still.  Even so, we put him in his hutch for overnight, covered him with a towel.

Good night, sweet Hoppy.  Thanks for being such a good "accidental" pet. 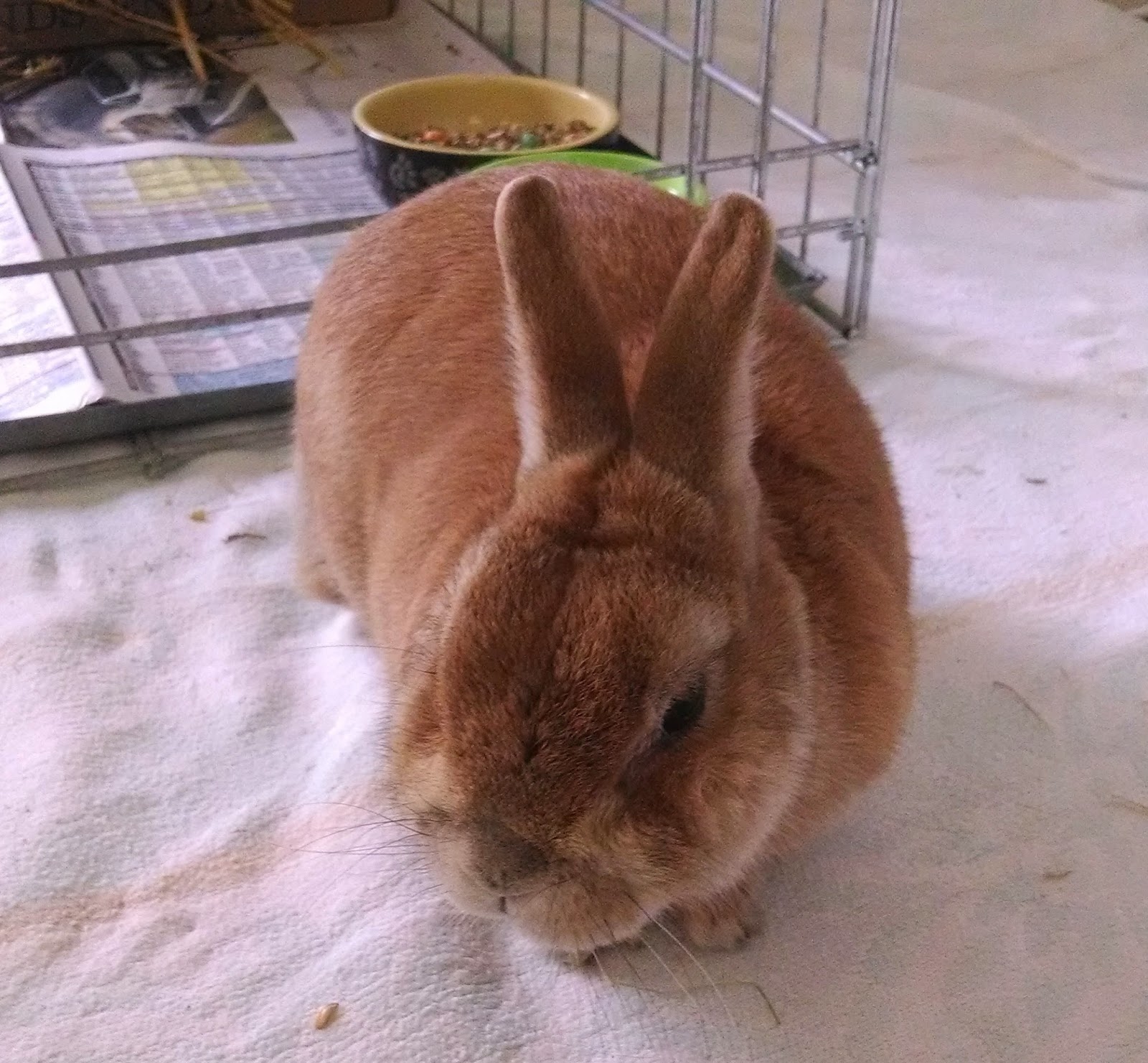