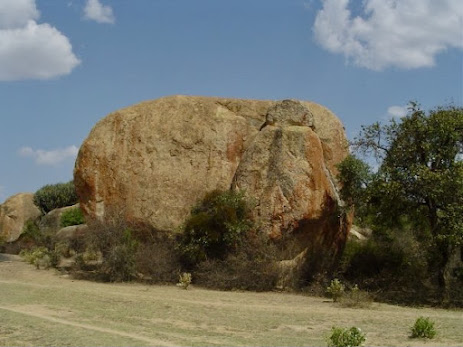 Christmas in the southern hemisphere occurs in the middle of summer. For many years, the Southern Rhodesia[i]missionaries all met for an annual Christmas picnic, rotating between the several larger mission stations[ii].  In 1958, my father was acting general superintendent of the missionary work. All the missionaries had planned to meet in the Matopo Mission in an School/Outstation, some eight miles from the mission.  The school was small with two buildings, both made of brick and grass thatch roofs. Altogether, we numbered about 50. We had each brought food and planned to spend the day in fellowship and an afternoon program had been planned.

The day started out beautifully—blue skies, cloud-free. A number of missionaries and older children started a baseball game. After we were well into the baseball game, the sky started to cloud over. Then it began to rain lightly, then more heavily, then it poured. We dashed for one of the two school buildings. We decided to have our picnic lunch inside the large relatively open building, and then to return to Matopo Mission for the rest of the day. We had our lunch, piled into our several mission vehicles, and started to return to the mission station. About a quarter of a mile from the school there was a small dry river bed we had crossed in the morning. Most of the rain had fallen upstream and the dry river bed was now a raging torrent. We were trapped—all 50 of us. We couldn’t cross the river until the water receded. We returned to the school house, where the children put on the program they had prepared. Two missionary men assigned to Matopo decided to hike back up through the Matopo Hills to the mission station to get the mission tractor to help us through the swollen river. We did not know how long that river would be uncrossable.

By this time, the air was cold, with the continuing rain. We built a fire on the earth floor of that school house, gathering wood wherever we could find it. Much of the wood was wet and it was difficult to start a fire, but we succeeded. One of the missionary men kept feeding wood to the fire, and the flames were growing higher. My mother alerted my father that the flames were burning high and sparks were beginning to fly. My dad had visions of the sparks setting the thatch roof on fire, and thought, Oh boy! That's all we need—to burn down the school house the people here built. So my dad said, "Better not put any more wood on. I am afraid the roof might catch on fire."

Finally, the two men arrived with the mission tractor, a big English Fordson diesel tractor, which was able to drive through the river, even though the water was still very high. They also brought a trek wagon along with them with some lengths of heavy trek chains to pull cars across. We decided that the tractor could pull the cars, with all their passengers inside, through the water.

By the time we crossed the river, it was dark. It took some time to pull all the cars and passengers across. We were the second to last car, and as we were being pulled through, our car floated in midstream. My dad kept a firm grip on the steering wheel and the front wheels pointed straight, and the strong tug of the tractor got us through to solid ground. The missionary who had built the fire was driving the last vehicle; midstream, he lost control and the vehicle began to float downstream. In his efforts to correct his angle, he kept twisting the steering wheel right and left, and finally, the wheels hit solid ground again and worked against the pull of the tractor. He thought something was drastically wrong with his car.

Only one missionary was not along on the picnic—one of the missionary women named Ethel who was fairly far along in a somewhat difficult pregnancy, and she chose to stay home. Her husband had come along on the picnic, however. My mother was concerned that we were not able to let Ethel know our plight. Before the first car was pulled across, Mother told the occupants to call Ethel as soon as they got back to the mission, but they forgot. When we all finally arrived back and found out they hadn’t called Ethel, we called her right away.

Here’s what Ethel was doing. When the missionary party did not return by sundown, she began to get concerned. Ethel was at another mission station, called Mtshabezi. First she tried telephoning the doctor's home at mission station hospital.. When she got no answer she tried calling the main house. Finally she called church headquarters in Bulawayo. No answer anywhere! It had not rained all day at Mtshabezi, and she began to think that something dire had befallen us—perhaps food poisoning—and she was the only missionary left in Southern Rhodesia. She finally decided to call the local police station, some 20 miles from Matopo Mission. They had decided that if she or they heard nothing more within the next half hour they would send out a search party. As soon as she received our call about 11:00 p.m., she immediately contacted the police and canceled the search party.

Needless to say, while I have experienced some wonderful memorable Christmases, none can rival the memory of this Christmas. As it turned out, it was the last Christmas I spent in southern Africa—my whole family returned home, and when my parents and siblings returned to Southern Rhodesia, I stayed in the U.S.

[i] Southern Rhodesia became Zimbabwe, as it is now called.

[ii] At that time, there were three main mission stations in the Brethren In Christ Church in Southern Rhodesia: Matopo, Mtshabezi, and Wanezi.

Photo of the Matobo Hills (as they are now called) from is one my brother took. Thanks for the permission, Daryl.