In a few days, the Rio 2016 Olympics will begin...or, for purists, the XXXI Olympiad.  The events will be covered virtually non-stop, with many breathless stories being told as viewers around the world thrill to the feats of strength, courage, and sheer athleticism. 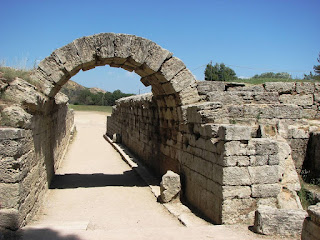 Entrance to the original Olympic Stadium--Olympia, Greece
(photo taken in 2008 when we visited Greece)

Deservedly, the general sense that viewers bring to the Olympics is a sense of wonder and admiration. The original Olympics had lofty ideals. The reach of those Olympics was small--geographically--and limited to men only. On the plus side the contestants did have to participate in their events in the nude. Perhaps to prove they were not armed--it was after all an attempt to do something competitive without resorting to battle and killing.

When the Olympics were resuscitated by Baron de Courbetin in 1894, again the intent, in part, was to foster goodwill among nations.  Many of the images from those early Olympics are inspiring. Stories such as those enshrined in the wonderful movie Chariots of Fire showcase sports competition of the best type.

Of course, there were awful events in those early Olympics--examples include Jim Thorpe winning gold medals in 1912 for the decathlon and the pentathlon, only to be stripped of them*.  Perhaps the most infamous of Olympics was the 1936 Olympic Games** held in Berlin, Germany. Adolph Hitler, who was rising in prominence, wanted to show-case his ideal of the super athlete--the "pure" Aryan.  We know how that turned out when Jesse Owens won four gold medals.

But, the Olympics that are seared in my memory did not center on individual athletic feats. Rather, the Olympics I most remember had the whole world watching, and the outcome was not known until the last moment.  In many ways, the unfolding events had nothing to do with sports. I am thinking of the 1972 Summer Olympics in Munich, or the XX Olympiad.

The setting of the 1972 Olympics was Munich, West Germany. West Germany intentionally set about to have these games be a counterpoint to Hitler's 1936 Olympics.

As the athletes were assembling, there was concern for the level of security evidenced, particularly expressed by the Israeli athletes team. But the Munich Olympics were all "sweetness and light"--nothing particular was changed.  When these Olympics went into its second week, suddenly a previously little known terrorist group--called Black September (a faction of the Palestinian Liberation Front)--seized members of the Israeli team.

Thus began non-stop coverage of the unfolding drama.  Watching it at the time, it seemed like it lasted a really long time. Actually, the original seizing of hostages occurred at 4:30 a.m. on September 5 and ended around 10:30 p.m. on the same day. The first news reports indicated that all the hostages had been freed and all the terrorists killed. Soon, however, the story was changed.

Jim McKay was the anchor for ABC which was broadcasting the games.  He had reported in initial reports that all hostages were rescued. Then reality set in--the report was erroneous. Not only were there no survivors--they were all killed. As Jim McKay sorrowfully said--"They're all gone."

As Time magazine reported--quoting his father initially, McKay said " 'Our greatest hopes and our worst fears are seldom realized.'  Our worst fears have been realized tonight. They (sources) have now said there were eleven hostages; two were killed in their rooms yesterday morning, nine were killed at the airport tonight.  They're all gone."

For me, the irony  is that these games which were founded in Greece--intended to give warring city states an opportunity to lay aside differences and a time compete peacefully--should be so besmirched by the terrorists' actions.

* The medals were eventually restored to Jim Thorpe...in 1982.

** One tradition introduced at the 1936 Games was the first torch relay.

***You can read an account of the hostage crisis here.
Posted by KGMom at 7:40 PM

Thanks for the history lesson ...but Olympians performing in the nude !!
That would be something to behold.

I was only 10 years old, and so do vaguely remember the details of the hostage situation, but did not understand exactly what happened or why. The focus was still very much on the games and not letting that event derail the reason everyone was there. In my 10 year old mind, the two things were very unrelated, or I was too young to understand the ramifications of that horrible act.

Although I was aware of the Munich tragedy, those games barely register. During that summer, we were likely at the cottage or visiting family.

There seemed to be an endless succession of assassinations, hostage taking, and war during my teen years and I do not remember the specifics of the Munich events. You have reviewed the tragedy in an interesting and relevant way. Let's hope the Summer Olympics in Rio continue without violence.