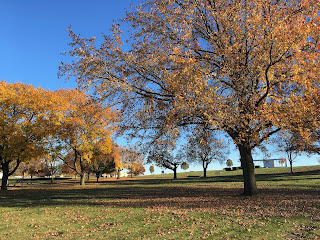 Nearby where we live there is a cemetery. With an atmosphere that is park-like it has become a favorite go-to walking place for me and our dog.

Years ago, two dogs back I used to walk our dog there.  That dog--an English setter (show not hunting) loved to see the squirrels there. One day, she spotted a squirrel who had not seen her, and for at least 15 minutes she inched up on that squirrel. Our dog's muscles were all aquiver as she silently inched one paw in front of the other. I think the squirrel must have had a near-heart attack when our dog suddenly pounced...but the squirrel got away.

Anyway, after a time, there came a day when the cemetery posted a big prominent sign you could not miss:  NO DOGS ALLOWED.  I was annoyed, and bemused. I thought--ok, no dogs. But squirrels, chipmunks, Canada geese, and foxes all running amok.  But, no dogs.

About a year ago, I decided to see if the dreaded NO DOGS sign was still there...by now, we had another dog, a lab mix--our sweet Ziva.  She gets many daily walks, so adding the cemetery aka park 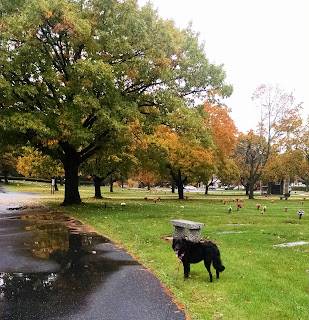 would be an asset.  Sure enough, the sign was gone. So our walks there have commenced.

Since dogs like to take their time--sniffing every tree, or blade of grass, or whatever--we spend some time there. And I have taken to reading cemetery plaques.  These plaques or stones are flat on the ground, some made of marble and some of brass.  Whatever their composition, they all tell a story.

--A name with a birthdate in the late 1890s, but death date. Someone was forgotten? Or didn't die (unlikely). Or the family either did not know or had not recalled where that burial plot was.

--Many graves with death dates in the late 1960s, most of them of young men in their early 20s.  Most likely killed in Vietnam--my generation's war.

--Two names side by side--or actually a double stone but with a name removed from its prior place. The one side has birth and death date, the other...blank. No doubt, the surviving spouse found someone new, remarried and decided to be buried elsewhere.

--finally, a stone with four names on it, all one family: mother, father, daughter, son.  What happened? Some tragedy. But what? An accident? or some other untimely end?

Whatever the circumstances, every stone a story.