Have you ever had an experience where, after the fact, you proverbially kick yourself and say DUMB DUMB DUMB?  To yourself, of course.  Well, I have.

I recently helped rescue a dog. I mean REALLY rescue.

Here's the back story.

A couple of weeks ago, when my husband was on his morning walk with our dog, he encountered a neighbor of ours.  She too was walking her dog, but behind her was another little dog, tagging along. My husband came in and told me, so I went out to see.  (A quick note to indicate my husband was leaving, right after the walk, to take our dog to the groomer--so our dog missed all this excitement.)

Our neighbor, Sharon, said the little dog had followed her the whole way around our block and seemed very drawn to her dog. But the little dog wouldn't approach her.  She also said she had an appointment and had to leave--but that she was concerned what the little dog would do--the worst, of course, being that it would run into the street and get hit.

So, brightly I volunteered--let's get it into our pool area (which is fenced in) and then maybe I can catch it.  Meanwhile, Sharon could leave for her appointment.  So we did--predictably, the little dog followed us into the pool area. Sharon and her dog slipped out and it was just me and the little dog.

She was cute--looked a bit like a cross between a terrier and a chihuahua. 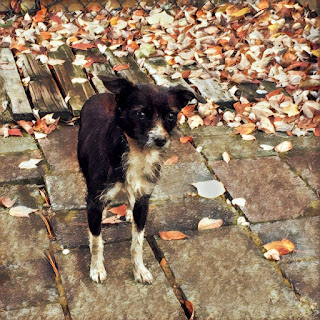 Once inside the pool area, and cut off from escape the dog began to panic. Along about now, having done a cursory visual inspection, I decided the dog was a female--so from here on, I will say SHE.

She ran all around the perimeter of the fence, jumping trying to see if she could get over it. And she failed. So I just sat down and watched her.  As I sat, she timidly began to approach me. She was shivering, from fear and cold. I had put a dish of water in front of her and also food. But she wouldn't touch them. After a few minutes, she actually approached me, and put her front paws up on my leg.

AHA--my moment. I grabbed her--only to come up with nothing. But in her fear and panic, she nipped me.  And that's when I thought--DUMB DUMB DUMB.  I mean, how many times have I read Julie Zickefoose's cautions about being careful handling animals who may be carrying rabies.  I cursed my stupidity in not slipping on some gloves.

When my husband returned from dropping off our dog, he called our local police. First one officer came out--very promptly--and tried to catch her. He at least had gloves on. But he too failed to get her--she was quick. So he called a partner to come with a catch pole. When that officer arrived--who happened to be the community officer--he did bring the catch pole, but it was too big and unwieldy for the poor dog.

In her desperation, she retreated to the middle of our pool cover and stood there shivering even more. 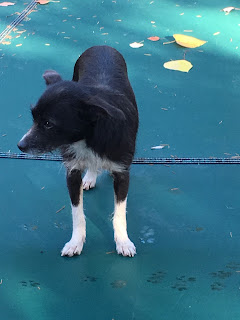 Then he spied our swimming pool net, and asked if he could use it.
Sure. And presto, with a little effort he caught her. She struggled mightily, but he was able to get her (note: he also had on gloves).  Now the question of how to get her to the Humane Society.

We volunteered one of our carriers we use for cats--so off she went.  The community officer left with her and the original responding officer began to write up his notes.  Just then, I said--well, she did nip me.  STOP EVERYTHING.

He suddenly flipped the page in his note book and began writing--asking me questions, then writing. He indicated any time someone gets bitten by a stray dog, the police must inform the Health Department.  Oh, boy.

It wasn't all gloom. As we chatted with the officer, he told us this dog had been on the run for more than 2 months and that many people had tried to catch her.  In fact, a local rescue group had plastered the surrounding area with posters. 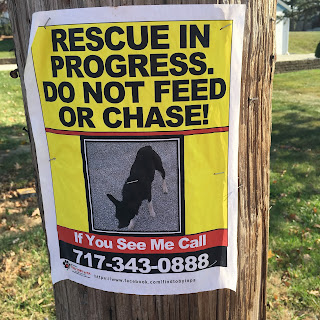 The dog had been sighted in early September, and it was now mid-November. So, at least I felt good about that.

Once the dog was gone, and the police, things settled back to normal.  UNTIL.  Until, the Health Department called. They asked the right questions. And I said--well, it is just a slight skin break, no puncture.  The Health Department nurse said--the dog should be observed for 10 days and if nothing develops then I would also be in the clear. I did ask--so what about rabies? Her response was almost cheery--don't worry, she said, rabies moves an inch a day from the entry point until it reaches the base of the spinal column.  GREAT--I calculated I had at least 36 days!

The story ends much less dramatically. First, the dog was quarantined for 10 days and nothing developed. She was fine.

But, and here the story turns a bit sad, her original owner suddenly came forward and reclaimed her. He had not reported her missing, and in fact he had previously had charges brought against him for abusing animals, but for whatever reasons the charges were thrown out in court.

This last detail puts a damper on my feelings of accomplishment for having help rescue the dog.  First, she was scared, hungry, cold and tired. And had she continued to run, she could very well  have been hit and killed. But to be returned to an abusive owner--that certainly tarnished my good deed.

I did learn a lesson though. Always have a pair of gloves handy and put them on before trying to catch a stray dog.a