When I first became aware of blogging, I began writing and reading.  My first blog entry was about a trip to Spain we had recently completed.  Once I wrote up the entire vacation experiences, I moved on to other topics--plumbing childhood memory depths, then observations about teaching, life, movies, along with the occasional rant.

I also began reading other writers' blogs.  Blogging is so much more satisfying for me than tweeting, or than reading Facebook entries.  First, almost every subject I can think of as a potential writing topic requires more than the truncated entry requirement of Twitter, and more than the clever or titillating bon mot that catches my eye on Facebook.  Second, I tend to limit whose blogs I read, which I also do with Twitter (for me, the least used of these self-expression media), but which I am less inclined to do with Facebook.  While I don't accept every request to "be friends" on Facebook, I have a wider circle there than I do in the blogging world.

But what I observe is that blogging is slowly falling out of favor.  Some of the early blogs I read no longer exist--in a few instances, the writers have died: they wrote bravely about their struggles with diseases that eventually silenced them.  Some of the blogs I read have fallen by the wayside as the writers move on to other ventures.  Some bloggers are still perking along, bubbling with a fountain of creativity as prolific as Ponce de Leon's mythical fountain of youth.  Sometimes I find a new blog to read and enjoy (see Pieces of Peace).

I know, in the core of my writing being, that Facebook will also fade.  And as I peruse the entries each day, I see it fading.  No need to catalog the Facebook complaints and woes here.

So, why my dire "The Last Word..." title?  Because I am about to take a mini-blogging break. 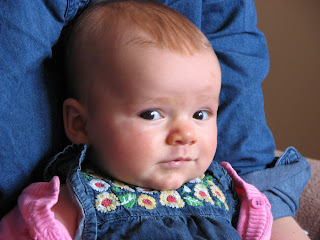 While you know we have traveled--both to the west (California, here we come!) and east (maybe something to do with this sweetie),  ----------->
I will soon be venturing down a path that age has set me upon.

SIGH.  The knee that has plagued me since college basketball is about to be replaced.  And I will provide humor fodder for my husband as I try to make my way around with a walker.

When I muster enough energy to come back to writing, I will.  Maybe I will have some new hospital stories.  Maybe I will have a rant or two.  But, whatever I do, I will pick up the proverbial pen and resume writing.
Posted by KGMom at 8:55 AM 14 comments:

So, I am reading an article from the New York Times of April 17, 2013 entitled "Physical Legacy of Blasts Could be Cruel for Boston Marathon Victims"--and I read this closing sentence "It's almost a paradox to see these patients without an extremity to wake up and feel lucky."  The quote is from Dr. George Velmahos, chief of Trauma Services at Massachusetts General Hospital.  He is talking about victims of the Boston Marathon bombing who lost limbs, but because they had been bleeding so profusely, they assumed they were dying.  When they awakened following surgery--even with a missing limb--they feel lucky.

At the same time, the news on NPR is reporting that the hoped for compromise bill calling for background checks on gun sales sponsored by Senators Toomey and Machin appears doomed to fail.

And then it hits me--I mean REALLY hits me.  I begin to cry.

But at the same time I think--what has happened to us as a country?  How have we come to a point where a zealous interpretation of Article II of the Bill of Rights, appended to the Constitution, has become more important to citizens in the United States than the foundational words of the Declaration of Independence?  Those words are:

We hold these truths to be self-evident, that all men are created equal, that they are endowed by their Creator with certain unalienable Rights, that among these are Life, Liberty and the pursuit of Happiness...

So, here's my dilemma--how did so bedrock a principle of "unalienable Rights...Life, Liberty and the pursuit of Happiness" get trumped by "A well regulated Militia, being necessary to the security of a free State, the right of the people to keep and bear Arms, shall not be infringed."

Among some proponents of the right to keep and bear arms there is a presumption that keeping and bearing arms is more important than life itself.   How else does one explain the impending defeat of a background check provision.  And, anyway--BACKGROUND CHECKS?  Really?  So if some piece of information is discovered that says because you are a convicted felon, you shouldn't be able to purchase a firearm, how is THAT an infringement on your RIGHT to bear arms?  Didn't you forfeit that right by being convicted of a felony?

One of the arguments that ardent proponents of the absolute right for gun ownership uses is that the recent spate of mass shooting tragedies points to the need for more mental health care.  Well, no doubt that is needed.  But wouldn't a background check help turn up some information on a person's mental well-being?  And would that not be a good thing?

It is hard not to conclude that we have gone crazy.  The NRA is terrorizing members of Congress, Congressional leaders are incapacitated in the face of the NRA's terror.  Meanwhile parents grieve for the children killed in Newtown, or Columbine, or Virginia Tech.  On and on the list of unspeakable tragedies continues,

I cannot imagine how heart sickening a parent of one of the children killed in Newtown will feel, should the background checks amendment go down to defeat.  I know I am heart sick at the state to which our country has come.  We have people who seem to believe that a background check somehow infringes on their Constitutional right to bear arms, but doesn't think that preventing a needless death is a fair trade.
--------------
ADDENDUM
Now I am depressed as well as sad.  Today, the Senate turned down the Toomey-Machin proposal.

And, to add to the absurdity of not calling for background checks, the growth of gun sales on the Internet makes the already too easy access to guns even more frightening--the same New York Times edition that has the article I cited above has a story on the Internet facilitating the illegal sale of guns.

I am inspired--or at the very least nudged--by the resolve of a childhood friend of mine who has vowed to resuscitate her blog by writing a blog a day for a month.  Now, it must be noted that she posted this intent on April 1--but I do think she is serious.  You can read her entries here.

At any rate, she has posted two blogs about her experiences growing up as a missionary child in southern Africa.  As I indicated, she is a childhood friend, so we share some common memories.  Reading her posts got me to thinking--it's been a long time since I posted anything about childhood.  As any long time reader of this blog knows, I have explored that topic.  All you need to do is conduct a search on my blog using CHILDHOOD and you will get quite a few entries.

But one topic I have not explored:  climbing rocks.  Now almost every child has had the opportunity to climb.  It is one of the true joys of childhood.  It can also be one of the precipitants of a serious childhood injury due to falls.  Most of us climb trees.  Some of us with access to farms climb in haylofts.  But, I would venture that not that many of us have climbed rocks.

I most certainly did.  The mission station where my parents were when I was last living in southern Africa was situated among the Matopo Hills (the current spelling is now MatoBo, and you can Google it to learn a bit more about this fascinating geologic place).

The Matopo Hills featured large boulders that rose like hills.  These are not small rocks--these are truly magnificent and somewhat mysterious looking rocks.  Many of them have caves, and in these caves where early humans lived they painted.  The uniqueness of the paintings and their importance in the development of art earned them a designation as a World Heritage site. 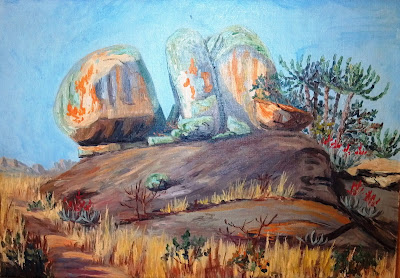 Now, I didn't go climbing into caves.  What I did was climb the rocks around the mission station.  The Matopo Mission was situated among some of these rocks--it made for a fascinating playground.

One time, I was playing tag with a missionary friend, a boy named Eugene.  He was a bit older than me, and far more daring.  As we chased over these rocks, with him in the lead, we came to a place where one rock was over-hanging another.  Eugene jumped, landing safely below.  I came up to the precipice and looked over.  A moment of terror seized me, but--ever competitive and spurred on by "anything he can do, I can do better" I jumped.  Miracle of miracles, I too landed safely below.

Hiking out away from the mission station a bit, Eugene and I found places where the rocks had been cleft by eons of rain water, wearing away and finally splitting a rock.  If you stood at the bottom, you could look up and see that the cleft went all the way to the top of the rock.  So, how to get up there?  Well, you chimney-stacked.  And Eugene taught me to chimney stack.

Since I have returned to the United States, I have not seen the Matopo Hills again.  But, years ago, when I first visited the Gettysburg Battlefield with my husband, I was thrilled to see Devil's Den there.  This place also had large rocks--a very small outcropping compared to the Matopo Hills, but nevertheless rocks worthy of climbing.

I do think my climbing days are long over--there's my age, there's my bad knee, and there's my slowly developing fear of heights.  Now, when I am some place aloft (such as a Ferris wheel), my toes curl under and my feet sweat!

Whatever happened to that daring girl who jumped off one rock onto another, or chimney stacked?  Ah, well, no matter.  I will let others be "on the rocks"--I will keep my feet firmly planted on the ground.