. . .another show.
Despite my brother's intense dislike of the song I used for my prior blog title, I will risk using another song reference.
The wonderful thing about endings is that they can lead to beginnings.
This morning, I arose and looked out the window--nothing so very unusual in that, but the sight that greeted my eyes was. Herewith: 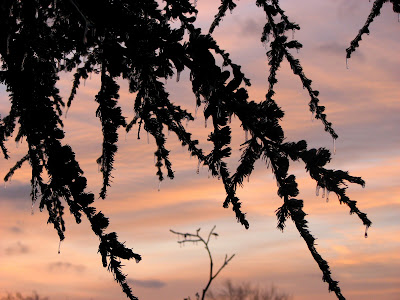 So, you might be saying--a very pretty sunrise, so what? Oh, my. We have had days on end of grey overcast skies, then drizzly days, or foggy evenings. And no sun--no sun at all (it seems) for days. Then this morning, I looked out our front window to see this lovely dawn.

As you might guess, my literary brain kicked into gear and I immediately began thinking:

"Now when the child of morning, rosy-fingered Dawn, appeared. . ." (Book II, The Odyssey by Homer)

This is one of the most famous opening lines in a literary work. 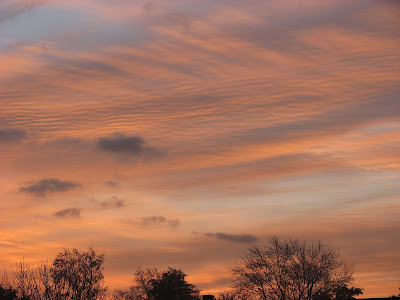 Isn't that a perfect description--the child of morning, rosy-fingered dawn.
Well, that got me to thinking about other famous openings. Can you identify the source before I give you the answer?
-------
Call me Ishmael.
(Moby Dick by Herman Melville)
-------
It was the best of times, it was the worst of times, it was the age of wisdom, it was the age of foolishness. . .
(A Tale of Two Cities by Charles Dickens)
Extra points if you can continue the opening!
-------
Arms, and the man I sing. . .
(The Aeneid by Virgil)
-------
All happy families are alike; each unhappy family is unhappy in its own way.
(Anna Karenina by Leo Tolstoy)
--------
It is a truth universally acknowledged, that a single man in possession of a good fortune must be in want of a wife.
(Pride and Prejudice by Jane Austen)
-------
If you really want to hear about it, the first thing you'll probably want to know is where I was born, and what my lousy childhood was like. . .
(Catcher in the Rye by J.D. Salinger)
-------
It was a dark and stormy night; the rain fell in torrents. . .
(Paul Clifford by Bulwer-Lytton)
The above opening line is frequently regarded as one of the worst examples of over-blown fiction, and has given rise to an annual tongue-in-cheek contest, appropriately called The Bulwer-Lytton Fiction contest, in which people compete to out-do that prose!
-------
As Gregor Samsa awoke one morning from uneasy dreams he found himself transformed in his bed into a gigantic insect.
(Metamorphosis by Franz Kafka)
-------
Once upon a time and a very good time it was there was a moocow coming down along the road
(Portrait of the Artist as a Young Man by James Joyce)
-------
Mother died today, or perhaps it was yesterday.
(The Stranger by Albert Camus)
-------
The boy with fair hair lowered himself down the last few feet of rock and began to pick his way towards the lagoon.
(Lord of the Flies by William Golding)
-------
I was not sorry when my brother died.
(Nervous Conditions by Tsitsi Dangarembga)
-------
And, given the season we are entering, the last entry. . .
Marley was dead, to begin with. There is no doubt whatever about that.
(A Christmas Carol by Charles Dickens)

Of course, there are many many more wonderful opening lines to novels. Do you have a favorite?
Posted by KGMom at 7:35 AM

I could only guess the two Dickens books, even though I have read neither.

"The skeleton was old, and held together with silver wires." (The Twelfth Physician" by Willa Gibbs.

You are the literary one, aren't you. I love those quotes. I recognized a couple...by the way, I love the songs you've mentioned.

"In my younger and more vulnerable years my father gave me some advice that I've been turning over in my mind ever since." The Great Gatsby by F. Scott Fitzgerald, but the last few pages are the best!

"Many years later, as he faced the firing squad, Colonel Aureliano Buendia was to remember that distant afternoon when his father took him to discover ice." One Hundred Years of Solitude by Gabriel Garcia Marquez

Hurray--Trixie--I was wondering if someone would do the opening from The Great Gatsby.
And the One Hundred Years of Solitude is another good one. Strangely, I have not yet read One Hundred Years. I have read several other Marquez's but not his masterpiece.

Come on, the rest of you--memorable openings?

Which translation of Homer is that from? I'm guessing Fitzgerald's. Have you read the Fagel's translation? I love it! It is really alive. I always love when they refer to the "wine dark sea."

I just re-read this last year with Zoey. It was tough prose for her, but once she got into it, she really liked it.

I've posted a few of my favorite "opening lines" here.

My favorite is this one:

He was an old man who fished alone in a skiff in the Gulf Stream and he had gone eighty-four days now without taking a fish. (Old Man and the Sea)

Oh, Donna, you hit on almost all my faves and Trixie finished it up with her Gatsby opener. My favorites that you did were Kafka's The Metamorphosis (which just might be the best opening line ever), Camus's The Stranger, Melville's Moby Dick, and Dangarembga's Nervous Conditions, which is my favorite book written by an African.

Probably my favorite opening paragraph can be found in Charles Brockden Brown's Wieland: The Transformation: "I feel little reluctance in complying with your request. You know not fully the cause of my sorrows. You are a stranger to the depth of my distresses. Hence your efforts at consolation must necessarily fail. Yet the tale that I am going to tell is not intended as a claim upon your sympathy. In the midst of my despair, I do not disdain to contribute what little I can to the benefit of mankind. I acknowledge your right to be informed of the events that have lately happened in my family. Make what use of the tale you shall think proper. If it be communicated to the world, it will inculcate the duty of avoiding deceit. It will exemplify the force of early impressions, and show, the immeasurable evils that flow from an erroneous or imperfect discipline." What a great beginning!

This would make a great post for my site too--thanks for the great idea, and sorry for my overly long comment!