In our local news lately, we have had a story about a Catholic high school, presently located in the city, which is planning to move its existing location which was built in 1930, to a new suburban location. Perhaps not surprisingly, the proposed location is on land not yet built upon. In fact, the land is field and a small wood. The choice of location makes me very sad—it is an open field I drive by on a weekly basis. True—there is not much on that land right now, but I am sure it is habitat to myriad small creatures and many birds. Depressing. 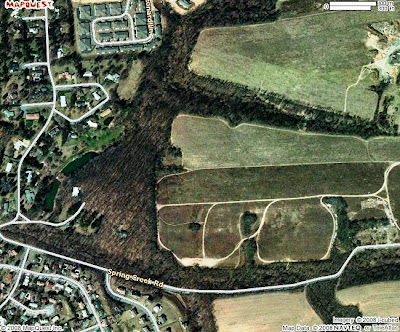 Then, in today’s New York Times, I found two stories that really increased my glumness. The first deals with continuing disappearance of amphibians--specifically glass frogs. Here’s the
story. 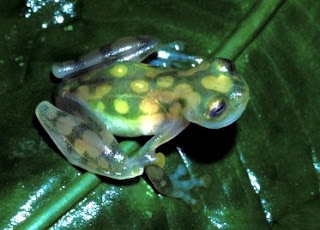 Photo of glass frog from http://www.nmnh.si.edu/rtp/students/2002/virtualposterinfo/poster_2002_cisneros_heredia.htm

A second story relates the problem of dying bats. Now, many people are less than enthusiastic about bats. For some reason, I really like them. They are marvelous creatures and help keep us from being knee deep in insect infestation. But, bats are dying under very mysterious circumstances. Not just a dead bat here or there—they are dying in huge numbers. Here’s the Times
story.
On the list of things that I worry about, over which I have virtually no control, is the degree to which we continue to act in ways that throw our planet out of balance. Disappearing toads and dying bats are surely evidence of that imbalance.
So, the local Catholic school will move, another open field will disappear. And I will worry and fret. If only—if only we made decisions with reverence for all creatures with whom we share this planet. If only we elected leaders who cared about the environment. If only we didn’t believe that every square inch of earth needs to have a building erected upon it. If only. . .
Posted by KGMom at 9:58 PM

I have a problem with this one meadow that gets mowed like a golf course! They always seem to mow it just before the bobolinks fledge the nest! They say, it's only a few birds . . . my comment is always . . those few birds could make a big difference! II wish you luck with this!

There's a lot of development going on around here, but I've never quite put it into the context that you do. As hard as it is, I thank you for your perspective.

When I was a freshman in high school in West St. Paul, MN, I used to love to hear the peepers singing on those early spring mornings walking into my school. Then the construction of new expensive neighborhoods started and by junior year...no more peepers. So sad.

That is indeed sad. Here in Florida where there has been so much development, one sees this over and over.

We have a planned community out east, which is beautiful, but I despise it because it just means that more of Florida has been covered with concrete and asphalt. It's a hoity-toity area where the people think that they are God's gift to the world.

Anyway, the other day in the newspaper there was an article about the wild hogs who are digging up some of their grass. I say, "Go, Hogs!"

In the thirty years we have lived on this neighbourhood, we have watched the progressive loss of bush, meadow and farmland for miles around. The new subdivisions are so dense now that schools and malls have to be built too. And the downtown languishes as the city spreads outward. There has to be a better way.

Oh, Donna - I saw Ruth's link to you and as I said to her - I can hardly stand to think of the natural areas, the fallow fields, the beauty - that I've seen go beneath the bulldozer in my 60 decades on this earth.

Thank God there are organizations like the Nature Conservancy that are setting places aside forever.

Donna, I share your sentiments EVERY DAY. In my life, I've never seen so much bulldozing of heavily wooded acres. Open fields are being scraped and plowed for retail stores and new housing communities everywhere I turn. I feel sick sometimes... At least a school will be built on your field - a worthwhile building, instead of nail salons, Dominos pizza joints, and townhomes.

The wildlife scrambles and some suffer a great deal. I've never seen a glass frog!

I wonder if the hummingbirds will fly off track with fewer trees to rest on - this continually changing landscape.

Hi Donna,
The catholic high school in our town is doing the exact same thing this year!
Your post made me sad, because you ask all the same questions that I do.
It looks like it's going to be up to us as individuals to continue to support conservation organizations and also to do whatever we can in our own backyards to help nature and wildlife.

As you know--this is happening faster and faster in my area (central PA), and I just go nuts when I see a new development. It's just so sad.

I've always said that of all the professions in the world, I hate the real-estate developers the most. Every inch of land to them means nothing but dollars and cents, when in reality it means so much more.

That glass frog is beautiful!