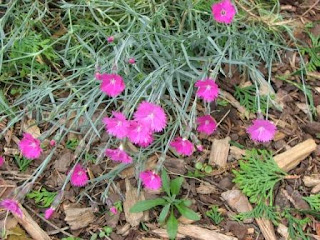 When my husband and I bought our first house, we were drawn to the house because of its flowering trees and shrubs. The backyard had lovely forsythia blooming, there was a flowering cherry tree on one side of the house, and a weeping cherry tree on the other. Once we moved in we discovered a pear tree that bore the sweetest wondrous pears.

However, all that greenery meant trimming and clipping. So, the first time we needed to trim hedges and such, we asked a man who helped tend the grounds at the college where I was teaching at the time. He came out to our place equipped only with a hand held hedge shears. I was astounded. I offered him our electric hedge trimmer, but he politely declined. I always trim by hand, he said. So I watched, and learned. He had an unerring eye, and in short order had the place in great shape.

Since then, we have moved to another house where I do all the hedge and shrub trimming. But I kept the lesson I learned from that long ago event. I prefer to trim greenery by hand, using just large garden shears. Occasionally, in a hurry, I will resort to electric trimmers, but I enjoy trimming much more when I do it by hand. 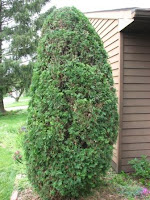 Yesterday was a lovely cool spring day, so I headed out to trim an arbor vita next to our front door. A couple of weeks ago, as I walked past this arbor vita, a mourning dove came fluttering out, making a great show of flapping around, falling to the ground, hopping a bit, dragging a wing, and of course leading me away from the tree. I presumed she had a nest in there, but when I looked into the untrimmed tree, I could not see anything.

Well, after I got done trimming the arbor vita, I spotted a mourning dove carefully watching me from nearby on the driveway. She kept close, waiting. As soon as I was done, she flew to the tree, crawled in and settled down. Aha! I had found her nest. So I tried to keep my distance not disturbing her too much. I did sneak up, of course, to get her photo. 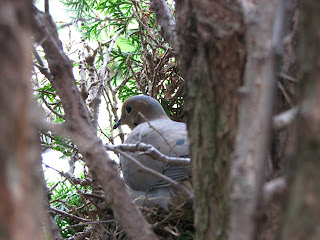 More inspections out and around my grounds, and I see the miniature rose is getting ready to bloom. This was a 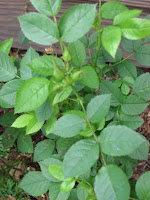 gift from my daughter several years ago, for Mother's Day. It has bloomed each year since.

Equally tenacious, but less beautiful, is the wild rose stock that keeps growing back every year. When we first moved to this house, I grew three rose bushes. They did well for a while, but 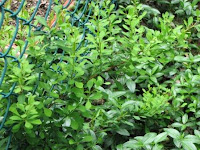 since roses take so
much work, I gave them up and dug them out. However, I must have missed some of the root of the wild rose stock which grows back every year. No flowers, of course, just the thorny hardy root stock.

I finally got to see my neighbor's bunny again--Hoppy. He is a carmel colored dwarf rabbit that they keep year round in a hutch. It bothers me to see him confined so, so I visit him and bring him an occasional carrot stick to eat. From his hutch, he watches the wild rabbits cavort. It always puts me in mind of "The Velveteen Rabbit"--which I will not think about too much, or I will start crying! (I confessed to my tendency to weep when I read touching children's books, here.) 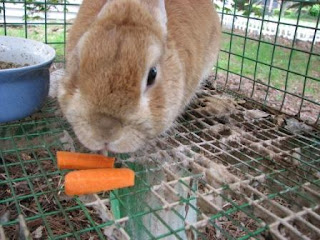 Oh, the flowers at the beginning of the post? Some of my dianthus, blooming. I love the deep purple pink of the flowers. 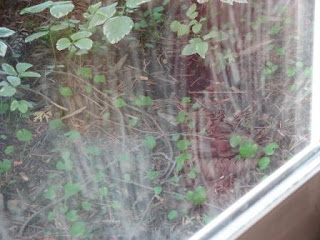 Looks like a dirty window, you say? Well, yes it is, but the "dirt" is on the outside. Paw marks--streaking down the window on the sunporch. Actually, on two of the sliding glass door windows. Methinks a squirrel was trying to get in. When I saw my neighbor yesterday, she said she saw a crow (her identification) grab a squirrel and fly up to the roof. Oh, no, hope it wasn't Alex. I will keep looking, but I don't hold out too much hope.
Posted by KGMom at 2:45 PM

Yes... all the beauty of a garden takes work! Sigh.. some days I'd like to be able to afford to hire a gardener, but then I'd miss out on half the fun.

Cute bunny... my neighbors have a hutch bunny too - they think I'm insane! I bring him hay now and again because his family doesn't know to feed it to him (and I got tired of buying it myself for them all the time). Silly people.

I bet he appreciates the carrots tho!

One of my children's very favorite books was "The Velveteen Rabbit." My daughter would demand that I read it and she cried every single time.

I also dislike hutched rabbits. When you watch a wild rabbit running and hopping all over the place, you have to feel sorry for the poor little caged thing. Glad he has you for a friend.

No hutch bunnies here. Our mini lop Buddy has the run of the house. He jumps up on our bed and licks me if I sleep too late.

I agree that trimming by hand is the way to go. Some men like power tools and the odd time my husband has brandished the chain saw and made drastic geometric shapes of our shrubs. I have never seen a dove's nest.

Thanks for the walk through your yard. I feel a bit about cats like you do about the bunny in the hutch. I know that being inside is safer for a cat, but I watch my daughter's two cats sit and look at the lizards and such outside, and I feel a bit sorry for them.

I hope your squirrel didn't meet his doom.

Who was ther college hedge trimmer (since I was a student there then)?

I'm glad you payed attention to the sweet Dove. I approached two fledglings last summer and witnessed the flapping like you described. Isn't it wonderful?

I love Mourning doves - at great peril here due to hawks.
A crow grabs a squirrel? Man, I don't like crows.

Thanks for the memories of college days. I like the attention to the plant itself that hand trimming encourages. Power trimming feels too much like just cutting something down, while hand trimming allows a greater awareness of the life you're pruning. Not to glamourize the process, but I think there's something real or properly alive in the craft of pruning and trimming.

I envy your beautiful surroundings but I know how much work it takes. Congratulations.

You keep a beautiful yard and I enjoyed the tour. Loved the story of the mourning dove, how very special. It'll be fun to watch the babies grow.

Great post. Still, I'd love to see a Crow that could grab a squirrel and do anything with it. Heck, a raven couldn't do that and . . . well, I'm guessing that crow had a lot of brown and white and a hooked beak and looked a lot like a hawk! :)

I have never read the Velveteen Rabbit to my children. Too damn weepy a story.

amazing flower photo and looks like your Mourning Dove is doing much better than mine did!