Were I not a subscriber to the Daily Almanac, that Garrison Keillor brings, I would not have known of the convergence of birthdays today.

A more unlikely pair you cannot find, I think. Yet Flannery O'Connor and Gloria Steinem share a birthday today. And each has been a heroine to me. 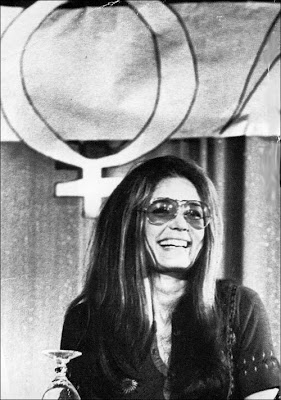 I suspect many people who know me well would say I am a feminist. Yes, I am. But I am not a strident one. I never burned my bra, for example. If pressed to define what kind of feminist I am, I may just offer my life--upon graduating from college, and getting married, and starting a family--I never stopped working. I worked the year my son was born--he was born at the end of January, I took February off and then resumed teaching. When my daughter was born, I worked the day before she was born, took three months off and then returned to working.
So I guess I would say that I am a feminist in terms of life choices--not marching, not philosophizing, just being.

Gloria Steinem was/is a feminist heroine for me. She is a very attractive woman--belying the old myth that all feminists must be ugly (take that, Rush!). In fact, early in her career she was a Playboy bunny. That particular detail always horrified and amused me. She was/is whip smart. As the founder of Ms Magazine, she may have had as much influence on current populist feminism as any one person. 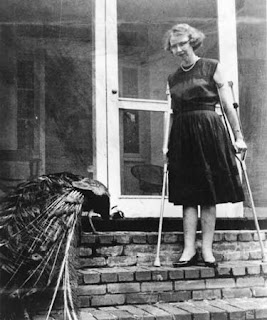 On the other end of the spectrum of this shared birthday is Flannery O'Connor. As a lit major in college, I came upon her darkly grim and humorous stories. I knew little of her life then, but in graduate school I did a lengthy paper on her and learned a bit. Flannery was painfully unattractive. And she suffered from lupus that would eventually rob her of mobility, and cause her premature death. She lived a somewhat solitary life, staying on the family farm in Milledgeville, Georgia. After her father's death, it was just Flannery and her mother plus a menagerie that included peacocks. 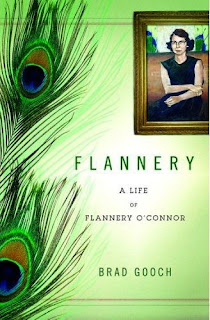 have almost come to expect with current movies--example No Country for Old Men.
Yet through all this dark view of humanity, Flannery was a fiercely devout Catholic, and you can find glimpses of the possibility of redemption everywhere in her fiction. Her body of writings is not extensive, since she died in 1964 at age 39. Yet she influenced many of today's writers.

Two of my heroines--born on the same day.
Posted by KGMom at 9:04 AM

I also consider myself a feminist. That said, I did stop working for several years when the children were small. I worked one day a week to stay updated on nursing and to interact with people who knew me as someone other than my children's mother.

I was a young RN, in the days of white uniforms and nursing caps. In the days when the nurses were expected to rise when a physician entered the room. During my working years, I was glad to see nursing truly become its own profession, not the handmaiden of the physician.

I have long been a fan of Gloria Steinem. I'll have to find out more about Flannery O'Connor.

Flannery O'Connor sounds quite interesting. I have not read anything of hers yet.

I too am a feminist and hope there will be a day when folks don't feel the need to qualify it with..."but I don't burn my bra or protest...or hate men" Are there women out there still burning bras or is that 40 year old image burned in our brains? I guess as long as there are Rush Limbaughs out there stoking the flames with those tired old images or continuing to use the term feminazis, some will feel the need to explain.

When I think that my 25 year old niece would never consider herself a feminist it shocks me. It also shocks me that as a single woman, it wasn't that long ago when I wouldn't have ever been considered for a loan to purchase my own car, let alone my own home...so...Happy Birthday Gloria!!!

I think a lot of women were feminists though they might not have identifies with the term. My mother comes to mind.

Heck, even I was a young nurse wearing white dresses, stockings and a cap, and was taught to jump up to give any physician your chair. And, they all seemed to be male. Thankfully, so many professions have changed with the times and women have come into their own as valued members of the team. No one would think twice about a woman doing any job now. A young woman today is not limited by her birth parts. Praise be.

I wasn't really aware that I was a feminist, but I live my life as such.

I went into labor when I was white-water rafting, finished the trip and went back to work two days later with my son strapped into a "snuggli".

I worked for 12 years as an operator in a smelter and for six of those years I was the only woman there. I worked my way up to supervisor and then moved on.

I worked as a carpenter for over a decade and then spent years taking and analyzing water and soil samples and mentoring fledgling watershed groups.

This post really made me think, and I appreciate it. Thanks.