No great insights in this post, my friends. I have just spent the second night in a week with a dog scared out of her wits due to middle-of-the-night thunderstorms.

Last Thursday, we picked up our daughter at the airport, drove home, had a nice evening, then headed off to bed. Transatlantic flight requires some adjusting to a new time zone! In the middle of the night, thunderstorms rolled through central Pennsylvania, and the dog--who HATES thunder--began her frantic whining.

So, I took her downstairs to our family room, barricaded her way back upstairs--so other family members could sleep. The dog was so upset, pacing, panting and whining, that I got her leash and put it on, so I could hold on to her.

After two hours of brilliant flashes of lightning followed by claps of thunder, the storm suddenly moved away. Just like that. The dog calmed down, and I finally fell asleep.

Well, the scene was virtually repeated last night. (This time, our daughter had safely returned 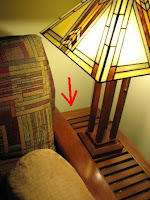 to London.) But in the middle of the night, again--thunder and a frantic dog.

So, I gathered her up, went into the study, and finally fell asleep on the couch there. The dog managed to wedge herself into an impossibly small niche that seemed to help calm her.

I do wonder why some dogs are so afraid of thunder storms. I suspect her hearing is far more acute than mine, so maybe the sound of thunder not only terrifies her but may also hurt her ears. Whatever the cause, thunderstorms seriously disrupt her normal calm demeanor.

Here she is in her "normal" thunderstorm hiding place--under my desk.

I can't recall a series of thunderstorms so close together in the middle of the night.

Well, by morning, all has returned to normal.

And I am back in the world of blogging.
Posted by KGMom at 12:44 PM

Poor baby. But I understand. Our big dog, Molly, paces during storms. Our little dog, Kody, paces because Molly paces. It is quite funny to watch. I asked a dog a trainer what to do to help Molly and she said that we should not coddle her because that actually makes it worse. She said to be firm and loving and she‘ll get through it. When the tornado came through in 2007, both dogs actually ran around in circles. It was not funny at the time, but it is a funny memory now. Now when there are tornado warnings, I leash both dogs so we have no trouble if we need to get into the basement quickly.

Awww, poor thing. It can be so hard and frustrating watching them. My old dog Jiminy did not like storms but she wasn't so hyper during them. She just needed to have a part of her body touching mine and she was all right. The cats on the other hand don't seem fazed at all.

I've missed your posts and am glad to have them back in my google reader. We have some thunderstorms too--I don't have a dog but they have certainly scared me!

Denise--I remember the tornado, and how you yelled at the dogs to get them to come with you, which of course freaked them even more. Having them leashed when tornado warnings are around is a good solution.

Christine--I wonder why cats don't get bothered by storms, but you are right--they don't.

Beth--thanks. We all need/take breaks from time to time, but I guess I still have things to say.

We have had several thunderstorms in the past two weeks and our dog gets frantic, clawing at the floor, hiding in the bathtub and panting++. He cannot settle in one spot and is getting worse as he gets older. I almost asked the vet if there is an Ativan-like drug for dogs.

Neither of our dogs are bothered by the lightning or thunder but one of Springer Spaniels used to tremble all over in fear. It was the thunder, not the lightning as we found out in her older deaf years.

Our dog doesn't mind thunder but goes nuts with wind. She tries to crawl into my back. If the wind blows and makes a door move, she really gets terribly nervous and crawls under furniture.

Our old Buddy was the same... I'd read that an old t-shirt with my scent might help calm him, but it never really worked.

I've also heard of doggy valium... maybe worth a thought if it's that bad for her.

I'd meant to send along congratulations to you and yours on the upcoming wedding - hope you enjoy the planning!

Just a thought... would headphones (you know, the big ones used for shooting ranges) help her? Poor baby.

Back to blogging but just a little bleary-eyed, I suspect.

A couple of interesting suggestions--dog tranquilizers, or earphones.
Both conjure up amusing images--our dog has had tranquilizers (in the course of surgery) and she gets positively goofy. And of course the image of earphones is quite humorous.
I think we will just have to ride out the thunderstorms. Her reaction is not new--but usually the storms occur in the day, and she can hide under the desk at my feet. This time, the difference was the night storms.

There is a lot of evidence that thunderstorm phobia in many dogs is more than just noise sensitivity - that a big part of it is that they can sense the static charge in the air. That's why it is such a hard problem to desensitize - you may be able to replicate the sounds with an audio recording, but you can't replicate the whole picture. (More info is in The Dog Who Loved Too Much by veterinary behaviorist Dr. Nicholas Dodman)

Some people have had some success using the Storm Defender cape (http://www.stormdefender.com/) that prevents static charge from building in the dog's fur.

Our thunder-phobic dog many years ago (also a BC mix) would seek out places where she was grounded, and would do well if we placed her in the bathtub during a storm (the plumbing in many, but not all, houses is grounded.) Eventually she would seek out the bathtub on her own when she felt a storm coming, which was much better than the drooling, panting, whining, shaking, pacing alternative.

Oh Donna, your poor puppeh! Our first hound had the same problem and our vet finally prescribed some tranquilizers for her. When I knew a storm was approaching, I would give her about a quarter of a pill (just enough to give her a good sound sleep for an hour or two until the storms had passed). The two dogs we've had after her were never bothered by storms.

Dog-geek--most interesting about the static charge. And it makes sense in the context of this dog. During the first thunderstorm I described, she suddenly and instantly calmed down, and after that there was no more lightning, no more thunder. SO maybe the static charge dissapated and she could sense that.
Hmmm--don't think I could get her into the tub. She would think I was planning a bath. . .

Well, huh! Not being a dog person (meaning that although I love them, I haven't had one) I didn't realize that lots are afraid of thunder. The cats just sort of disappear into the woodwork and come out when the weather calms down. I'm sorry that you and the dog are losing sleep- hopefully you'll hit a clear spell.

Donna, I feel for you and your dog. We have one of our dogs (outdoors) who is afraid of the sound of fireworks. And living in CA where the weather is almost always fair, we have "idiots" who think it's fun to shoot them any old time of year, day or night. So we always have to be alert, otherwise, Mick goes berserk, and either harms herself or damages property. The more I think about it the more I'm thinking of putting this dog on tranquilizers, although I hate seeing a dog "doped up."