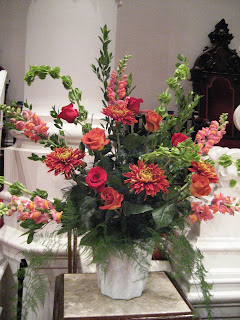 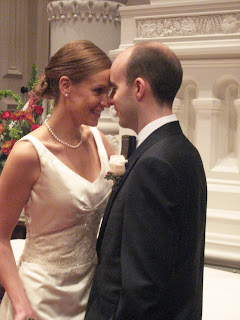 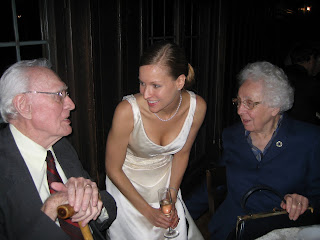 Things are a little hectic around our house right now...the wedding and attendant festivities on Saturday. A lovely brunch on Sunday hosted by our daughter and son-in-law (yes, I get to write that well and truly for the FIRST time). Then Sunday afternoon, daughter and SIL packed up to depart for the airport, via SIL's home in New Jersey. Also son and DIL packed up to depart.

Monday, my husband and I went into high gear. Bedrooms cleaned up, order restored. And then order promptly undone, as we packed up the kitchen. On Tuesday, workers came to tear out our 30 year old kitchen, and they immediately set about building a new kitchen.

With the week leading up to the wedding, I had mostly concentrated on that happy event. I put aside any class preparation--so in addition to the house clean-up, packing up goings-on, I managed to grade one set of papers to return to the students on Tuesday. I also whipped up a smashing lesson on literary analysis (OK--that was easy, as I love teaching literature).

Meanwhile, poor little camera is still missing. I emailed the church to inquire. I called the hotel where the Sunday brunch had been. I called the caterers who ran the reception. Still no camera. I asked my son--did an errant camera sneak into your luggage? I even sent a message to my honey-mooning daughter. No camera.

On Tuesday afternoon, I went off to class. And, as I set up for class, I opened my purse. What's this? Uh? A camera? Neatly tucked in its little black case? All soundly nestled in the deep reaches of my most commodious purse? Huh!

So, there you have it. Yes, I had looked in my purse--in fact several times. I had opened all four zipped parts of the purse. I had looked in the two snap parts (it's a big purse, OK?). And each time I missed the little black case. When I saw it, I assumed that it was my make-up kit. The one thing I didn't do was turn the purse inside-out. I should have.

When we thought the camera was lost, my husband began a little sequence of missing camera jokes. I think he was up to number 10. When I got home from class, I sheepishly told him I had FOUND the camera.

And that, dear blogging friends, began a whole new round of camera jokes, only this time they are found camera jokes. Sigh!
--------
* I wrote True Confessions...Again as my blog title. I used that title once before, here.
Posted by KGMom at 8:12 PM

Are you sure you don't have the Y chromosome?

I think you had plenty on your mind! Don't be too hard on yourself. Now that you've found the mising camera, will you post updates on your kitchen renovation?

OK, so I can EASILY see how in a cavernous purse, which probably also has a black liner (?) that you "saw" it but didn't really "see" it? :c) Just a way of saying, I'd probably have done the same thing!

Yep. Been there. I call my purse the Bermuda Triangle purse.

Oh I have SO been there! That usually happens when I can't find something in my car though--I call it a giant purse on wheels!

In our house, when something like that happens (um..not too often, mind you) we just blame it on the "little people" having fun with us. Just a side note - I've stopped carrying a purse, no need to mention why :-)

Commodious purses are such a hazard...
Just catching up on a few blogs. What an elegant wedding with an exceptionally beautiful bride! Congratulations all around. Your dad also looks well.

I love happy endings! So glad you found your camera Donna!

I read your brother's blog and his adventure of getting to the wedding from Winnipeg via O'Hare.
He seems like a laid back guy and handled it fairly well. His difficulties reminded me of another reason I am not a fan of flying.

So glad you found your camera and provided a hearty chuckle at the same time~~I keep trying to go smaller with the purse but that doesn't help either.

Huh. I've never lost a camera in a purse…but I lose my cell phone in the pickup's seat regularly, and lens caps for my SLR, and Moon the dog's leash. In the house I can lose anything smaller than the refrigerator (and have!) especially books I was just reading, CDs I had in my hand a moment before, and the cup of hot tea I just poured and was clutching tight in my paw as I walked between the kitchen and living room.

A camera in a commodious purse is nothing to apologize or feel abashed over.

Why, my Uncle Don, a minister and not given to noticeable absentmindedness, once misplaced Alma, his wife of fifty-some years, and didn't realize she was no longer sitting beside him on the front seat of their automobile until he'd driven more than a hundred miles from the restaurant where they'd had supper.

Are you sure not related to Lois, Donna? I have seen that scene played out too often! Which reminds me, I must tell her that Pebbles said I seem like a laid back guy. She certainly didn't think so at the time. Truth is, she kept calming me down, and I started writing impressions of O'Hare in order to cope. I was laid back once upon a time.

I am delighted you found the camera, and that we have access to the pictures therein.

That's what we refer to as "indoor blindness" - the ability to be looking right at something but somehow not see it. But all's well that ends well, right? It is wonderful that you found it - the pictures you posted are great!