The Rule of Threes

We humans are an interesting lot--we note things by number groupings. It is an arbitrary approach to observing things, but we can't help ourselves. The number three is one way we note things. We hear of the death of a famous person, then another--and we wait for the third death. If we try twice at something that doesn't work, we say "third time is a charm."

Well, not sure if nature counts by threes, but this summer has brought three unusual events our way.

The first unexpected event this summer was the earthquake. I grant you, by California standards--or almost anywhere in the world far less tectonic plate stable than the east coast, it wasn't much. Still, since I felt it--and saw the walls move--it was plenty enough for me.

Then, the second event--Hurricane Irene decided to waltz through central Pennsylvania, as well as other parts of the north east U.S. No matter how loudly and heartily I sang "Goodnight, Irene"--she just wouldn't leave. We watched as our lovely tall evergreens in the back yard began falling: one...two...three. Several days later, the tree guys (who were SUPER busy these days) arrived, whipped their noisy saws into action, slung rope and pulley over a neighbor's tree, hoisted, dragged and pushed the downed trees through a large grinder.

That was quite enough for me. But, nature had one more little treat in store--the third event.
Hurricane Irene gave way to Tropical Storm Lee. As rain fell day after day, we watched anxiously to see if our usually dry basement would stay dry. This past Wednesday, both my husband and I had plans to be out of the house for separate lunches. I went to the basement around 9:30 a.m., just in time to see a portion of the basement floor with a slight inch of water creeping in and bubbling up.

We both changed our lunch plans and went to work. While I began syphoning up water with our wet vac, my husband made a quick trip to our friendly Ace is the Place Hardware store to rent an industrial size wet vac.

We worked solidly for five hours--emptying the vacs by lugging buckets up the basement steps. Finally, with the rain continuing, we gave up. We managed to rig up a small pump which normally is used in the winter to keep water off the swimming pool winter cover. By attaching a long garden hose to the pump, and then running that hose up the stairs to the family room level, we were able to have the water run down a drain in the laundry room.

That system ran all night. By morning, small patches of dry floor began to appear. We turned on the dehumidifier, and set up a floor fan. With the rain slowing down, then stopping, we "won" the water battle.

What was ending for us was just beginning for the area. The Susquehanna is a lovely old river--almost a mile wide where Harrisburg, our state capitol, sits--this river can handle a lot of water. But it begins to flood at 17 feet. The original forecasts were for the river to rise to 29 feet.

Suddenly everyone was making the obvious comparison--to Hurricane Agnes. Hurricane Agnes wasn't much of a hurricane, back in 1972. But this low-level hurricane stalled over Virginia, Pennsylvania and New York. Between June 19 to 24, Agnes dumped upwards to 19 inches of rain in Pennsylvania. Rivers rose, creeks rose, and even long-forgotten canals filled.

In Harrisburg, water backed up the Paxton Creek, which had been channeled into a canal which few people knew even existed. The result was that Harrisburg had water all around it, almost cutting it off.

At the time, my husband and I were living in an apartment outside of Harrisburg. We had recently had our first child, our son--who was six months old. We were not greatly affected, except by the excitement of the news.

So, when the comparisons began this time to Agnes, it brought back memories as well as a frisson of dread--would Lee be as dramatic as Agnes? Well, yes and no. The river level did not break the Agnes record--it crested just over 25 feet. But still, for all the folks who were displaced, who lost homes to the flooding, the height of a flood matters little.

This photo--taken for the Patriot News by Sean Simmers--shows a neighborhood in Harrisburg called Shipoke. We have three friends from church who live in houses facing the Susquehanna. All of them had to evacuate. 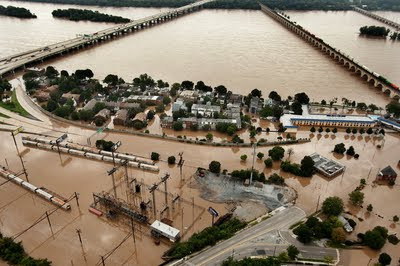 Here are some other photos by the same photographer.

Some places that had not been affected by Agnes were flooded--for example HersheyPark, a favorite tourist destination. Both of our children had worked there-so we had a frame of reference as we looked at photos of some of the places we knew. The roller coaster was not designed as a water ride. 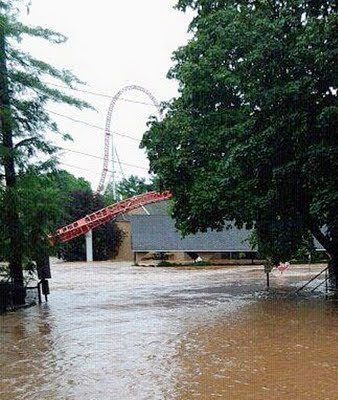 Lee has moved on--and, with 15 1/2 inches of rain, it now takes its place as the SECOND wettest tropical system to dump rain on Pennsylvania, right behind Agnes.

Let's just hope that the rule of threes holds--that there are no more unusual events at least for this year.

I agree with AC. I certainly hope that's it for this year. You must have been exhausted with all the vacuuming of the water but wasn't it great that you got ahead of it.

I'm making the third comment on this post, thus ensuring that the rule of three will hold.

I do hope the worst is over.

I was just as glad to be out of the country for Agnes. Now we live permanently out of the country, but the rain continues. I gather that Lebanon and Lancaster counties were hard hit. I also worked at Hershey Park -- back in 1971. Sorry to see so much flooded out. I hope you now have a pleasant and enjoyable winter. I would wish you clean bright snow, such as we have from November to March, but that would mean you had moved north!

@ AC & Ginnie--we have lived in our house for 30 years. This is only the third time we have had water in our basement. Two of those times were this year. We have talked about some water-proofing steps, BUT in these last two times, water has pushed UP through the floor. So, given that pressure, we think water-proofing would be an exercise in futility.

@NC MntWmn--ha ha. Yes, the rule of threes. It does bemuse me. The truth is that after the third whatever, we stop paying attention.

@Daryl--I didn't recall that you also worked at HersheyPark. You are correct that Lebanon & Lancaster counties were hard hit. And last night, there were warnings for flash-flooding again as rain storms moved through.
I will be happy for clean white snow. You know I love it.

AWFUL! I'm impressed with your ingenuity though.

Oh, to figure out how to pipe floodwaters to drought areas!

Keep your powder dry. (Only saying that to add a third paragraph, in keeping with your theme. )

I visited Hershey in September 2004 and there was a fair bit of flooding from tropical storm. But it was nothing like your pictures. These seems like an active hurricane season and they are sure to finish the alphabet soon. Wishing you the best!