The Writer’s Almanac for April 26, 2015, included these sentences:

(April 26) is the birthday of the man who once wrote, "I feel I am strange to all but the birds of America": ornithologist and artist John James Audubon born (on April 25) in Les Cayes in what is now Haiti (1785). Audubon grew up in France, and when he was 18 years old, his father managed to get him a false passport to escape the Napoleonic Wars, and he headed to America. Fascinated by all the new American birds he saw, he began to study them more closely. . .
Audubon fell in love with a woman named Lucy Bakewell. Her father objected to Audubon's lack of career goals and insisted that he find a solid trade before marriage. So, he opened a general store in Kentucky on the Ohio River, and soon after, John and Lucy were married. Audubon was a terrible business owner, and eventually he realized that his best chance for success lay in his birds after all. Lucy took on the main breadwinner duties by teaching children in their home, while her husband traveled all over the continent collecting specimens for his masterpiece, Birds of America (1838).

Which immediately sent me tumbling back in memory to 4th grade, at the Shepherdstown school.

In 2007, I posted a recollection of my 4th grade experience in grade school in the United States. Most of my elementary education was in (then) Northern Rhodesia (now Zambia), and later in (then) Southern Rhodesia (now Zimbabwe). But for a little over a year, my parents were in the U.S. on furlough.  So, I went to American schools for part of 3rd and 4th grade.

So what does this have to do with James Audubon? Well, I remember little from those two grade school classes, except this. We did a play in class—all about James Audubon and his beloved Lucy. I have no idea which students played what parts. I just remember being enthralled with such a sweet love story.

Trust a nudge from the Writer’s Almanac to set my memories aflutter.  The things we remember… Sometimes those thoughts are "for the birds." 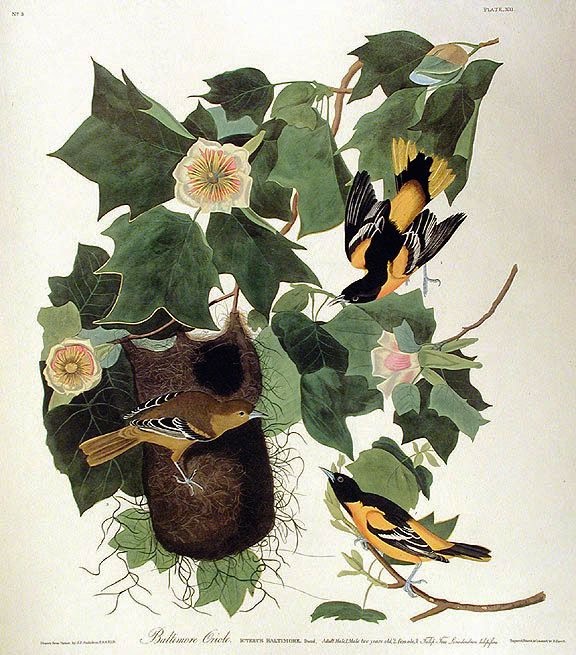 I had no idea he was born in Haiti. In fact I know little about his life before he illustrated birds. I'll have to read a bit more about him.

NC--here are two other fun details about him. He was inordinately proud of his own flowing locks. Look up a portrait of him. He wrote that all the ladies swooned over him.
And, he and Lucy often lived in near penury. That was one detail woven into the grade school play. Clearly, the play was an effective way to teach--at least me, as I can still recall that play 60 years later. (Yup, I celebrated my 70th birthday this year.)

Very nice. I love these memory jogs which trigger thoughts of long ago. I find myself having them more often these days..:)

I grew up with Audubon bird prints around me and I loved them but never knew any of his hx.

BTW: You asked about the tone of the bell that my son-in-law made for me. I just asked him and he took his I-touch thingy outside and used the tone measurer on the bell...and came back to say "the tone is 34 cents over F4". ??? I have a feeling you will know what that means but it's Greek to me !!!