A number of years ago, I was doing some research on my paternal grandparents. They had been missionaries in southern Africa (from 1920 to 1929), so there was a wealth of material on which to draw. You see, I was writing a short biography for a small historical journal.

Not only did I read letters they had written to each other and various church publications my grandfather had written for, but I also interviewed their children--my father, my aunt, and my uncles. When I posed a question to one of my uncles, he gave an interesting answer.  The question was: when did you leave home?  His answer was--Leave home? I didn't leave home, home left me.

Leaving home has been a repeating occurrence in my life.  And those times--having to say goodbye--are what I think were the events that moved me from childhood to adulthood.  I can't really say--as my uncle did--that home left me. But my first leaving home was something precipitated by choices my parents made. 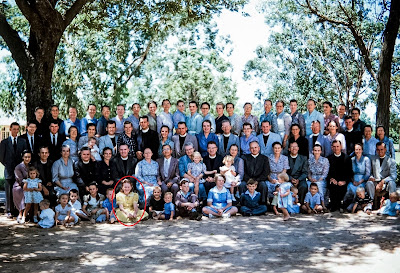 (Click to enlarge...I am the one in the yellow dress. Apparently I didn't get the message to wear a blue dress.)

When I was 5 (turning 6 in a month), I first went to boarding school.  You see, my parents were also missionaries in southern Africa. One of the dilemmas that my parents had (as did many people who were "aliens" in a country and culture not their own) was what to do about educating their children. For the first two years, my mother taught me, using correspondence material. But, soon it became clear that as the only missionary child on the mission station, I needed a different environment. I only recently learned that part of the impetus for my early departure for boarding school was the fact that I began to be "too bossy" around the African students at the mission school.

So, my parents took me to a boarding school. That was the first of several such schools. Each time, I was away from home with holiday stretches in between terms.  Then, when I was 15 we returned to the U.S.  However, my parents did not stay here. After a year's furlough (kind of a working vacation) they returned to southern Africa.

My parents asked me if I wanted to stay in the U.S. I was in 10th grade, and college would be the next stop on my educational pathway, which would mean either I stayed in the U.S., or returned. I chose to stay.

That was, as I now reflect, the moment when I crossed over from childhood to adulthood. Oh, there were other gradual maturations along the way. But once my parents were on another continent, I had many decisions to make on my own.  My uncle* and aunt had accepted guardianship for me, but I did much on my own.  For example, I opened a bank account...which was at a bank in a town 5 miles away from where I lived. No such thing as on-line banking.

Even though I turned 16 about the time my parents returned to southern Africa, I did NOT learn how to drive. My uncle was not too keen on a teenage "daughter" learning to drive. Oh, I forgot to mention that my uncle and aunt had no children of their own, so suddenly having a teenager on their hands was a real shock.

For two years, I lived with my uncle and aunt  where my uncle was college president. Then I went to college at that place. One year after I began college, my uncle accepted another position, and moved half the country away. I stayed put, of course, being in college. So my self-reliance increased.

When the college was closed for holidays, I had to find a place to be. Very kind dear friends at times invited me home with them. Or I was in college choir, and we toured during spring breaks. Summers were another challenge. For 3 summers, I traveled to near Fort Erie, Ontario to work in wealthy folks' summer homes along Lake Erie.  How did I get to Canada and back? From central Pennsylvania? I have no idea, except somehow I managed to arrange rides.

So, did I leave home? Or did home leave me? Whichever (or both) I certainly had to grow up.  Not long before her death, my mother expressed to me her regret that she and my dad had agreed to allow me to stay in the U.S.  I thought for just a few moments, and then said to my mother--don't. Don't regret a decision you thought you had to make. I like who I am now, and obviously part of what made me who I am is a consequence of the life I have lived. So don't regret your decision.

You in yellow is great. Did you feel mortified at the time?

It's a wonderful first post to read on this theme. I am sure going away to school and being separated from your parents was a key event(s) for you.

Wow, Donna. As I read this post, all I could think about was how much bravery and self assurance it had to take for you to be able to navigate as a 16 year old, pretty much on your own. Then, I also found myself beginning to understand the psyche of "missionary kids" much better, after reading about the trajectory of your life. We all do what we have to do with the life we are given, but I still feel like it took a good bit of chutzpah to become the successful, self reliant woman you turned out to be. You SHOULD have been in yellow!

As a missionary kid I left home at 14, and was excited to go to boarding school 500 miles away, even though it meant navigating some homesickness. But I can't imagine, Donna, how you fared at the age of 5, doing that. It was hard enough to be acquainted with my parents after leaving at 14. I had to get to know them anew when they moved to the U.S. during my 2nd year of college. I loved the independence, though; always have. Never lived at home again except for vacations, after the age of 14.

I love this, Donna. You certainly had (and continue to have) a lot of common sense and confidence. I also like that you told your mother not to have regret--we are who we are because of a million different variables.

This all sounds very exotic and grown-up to me, but I can imagine the loneliness...

I really enjoyed this post. Especially the ending with your reassuring your mother they made the right decisions early in your life. I could easily see a memoir coming from stories like this. I hope you will share more of your early years in times to come.

Donna, I tried to comment on the day you posted this, but for some reason, it never showed up. So let me try again, although I can't remember everything I said then.

I resonate with much of what you said, having also gone away to boarding school, moved frequently, and experienced the culture shock of entering 10th grade in an American high school at age 13. Those early experiences have had a lot to do with who I am today, for good and ill, I suppose. But I wouldn't trade them for a more "normal" childhood.

I just re-read Elspeth's Huxley's book The Flame Trees of Thika and one segment describes her running away from her boarding school and taking a train back home due to bullying. Sounds like you missed that kind of experience but I am sure you grew up quickly. That girl in the yellow dress looks like she is a confident and independent spirit. As a shy child, I don't know how I would have coped being away from my family at such a young age.

What I hear shining through this narrative of where you moved and lived, is that you took home with you wherever you went. Clearly there are stages in our lives when growing up is quickened by our circumstances and experiences, and natural developmental stages, but an even keel seems to have been a steady guide for you from early on. Thanks for sharing this thread of your life with us.

So you went to school earlier than I did because you were bossier than I was? I think I can buy that ... We are who we are, as you say. TCKs -- MKs -- whatever other name we take. I like "third culture people", each with our own unique blend of the cultures we have lived in that makes our "third culture". Our very own. Even yours, mine, and Denise's are different, although shaped by many of the same people and events.

Thanks for the memories.