Thus It Ever Was


It was the best of times,it was the worst of times,it was the age of wisdom,it was the age of foolishness,
it was the epoch of belief,
it was the epoch of incredulity,
it was the season of Light,
it was the season of Darkness,
it was the spring of hope,
it was the winter of despair.
--------
Perhaps it is inevitable that every generation views its own time as "the best and the worst" of times.
Dickens wrote this opening sentence for his classic A Tale of Two Cities--a novel set during the French Revolution.  The dichotomous structure of the sentence perfectly captures the thrill and the terror of tumultuous times.
I was born just before World War II ended. I have occasionally thought about my parents--getting married in 1942, having their first child in 1945, going to Africa as missionaries in 1946 (flying there because shipping was still not without danger from all the mines that had been placed in the oceans during the war).  There must have been an element of "the worst of times" sense for them. Those were tumultuous years indeed.
And, yet, it must have also been "the best of times." Beginning a life together, welcoming a baby, embarking on a life calling.
As I contemplate the present world, so many examples of "the worst" leap out at me. Bombings in Baghdad  or Brussels (or any other city), non-stop rapid gunfire in Orlando, Newtown, Charleston, San Bernadino, wildfires up and down the western U.S., flooding in West Virginia, Houston, Paris, Pakistan., political upheaval in the United Kingdom, in the United States, in Brazil, in Bangladesh.
The list seems endless. The worst of times.
But for every "worst" there is a "best". These stories do not as readily grab the headlines. After all, we seem to prefer blood and guts more than human kindness. At least, the news moguls seem to think so. 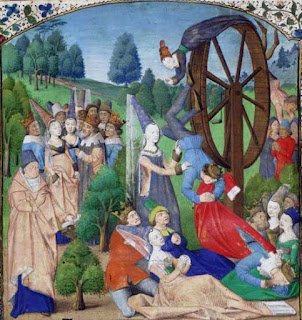 What strikes me is the way in which generation after generation has experienced this dichotomy. We think our times are the hardest, the worst, perhaps the best. We view our existence as the pinnacle of human history ( Lord, help us all).
So, is it the best of times? the worst of times?
Two thoughts remain with me--first, there is balance. First, just as those in medieval times focused on the great wheel of fortune--what is cast down will be thrust up, what is thrust up will be cast down--we do well to remember that. And second, thus it ever was.

Life is definitely peaks and valleys, and I suppose if we never had the valleys, we simply could not fully appreciate the view from the peaks?

Yes, life does keep running in cycles. And I do love hearing about the good in people.

You could put it also in terms of yin and yang. The extremes are in process of becoming their opposite -- again, the idea of balance.

You and others are doing really well with this prompt. I don't think I'm going to do it since I have other things on my mind, but I am impressed nonetheless.

Hearing my grandparents talk about WW1 and my parents talk about WW2 has always left me thinking that I have never really known difficult times. But we still are obsessed with and drawn to bad news like flies to honey and can lose our joy as a result.

I am so disheartened by the events in Dallas last night that it's hard to see anything but "the worst of times". I pray that we can change this for the better.