Some people have childhood injuries they recall, or perhaps some trauma from teen years. And me, well, a memorable injury for me occurred just last summer.

In fact, there were two injuries. And they both occurred while we were visiting our daughter and her family.  We were in London for the birth of one of our granddaughters.  Among other things, I was occasionally preparing an evening meal. One evening, as I was heating a casserole in the oven in our daughter's family flat, I  pulled the casserole out to examine how "done" it was. Unfortunately, the whole dish began to slip. Since I envisioned the entire family's dinner going on the floor, I grabbed the metal casserole dish with bare hands.  Standing right next to me was our oldest grandchild--who was 2 and 1/2 years old. I said to her--Anna, grab the hot things.  Thankfully, she was quick thinking and knew I meant the hot pad holders.

The result was that I burned all but three of my fingers on my two hands. 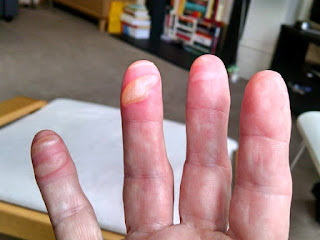 Of course, with time I healed. But for months that memory was seared into my granddaughter's mind. She would retell the event, or ask to see my hands, even when we were talking by Face Time.

That same summer, I sustained one other injury. Thankfully, this one, while it occurred while I was with the same granddaughter, she was unaware of it.  We had gone to a carnival in a nearby neighborhood park. And there was a carousel!  What child can resist a carousel.  So I went to the man operating the carousel, gave him the necessary tickets for my granddaughter to ride it, and proceeded to help her choose a place to ride.  OH NO, said the man--you can't just put her on the carousel; you have to ride with her.  So in a panic (the ride was ready to start) I quickly climbed up. The side of the carousel was much higher than I expected, and I scraped my leg.

I knew instantly I was injured, but I kept the news from my granddaughter. After all, she already had the searing memory of my burning my hands.  As we rode up and down on the carousel horse, the man next to us looked over. He exclaimed--you're bleeding.  I quietly replied--I know. 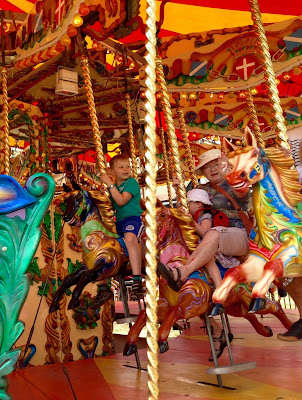 And, that is how I found out that I am now "thin-skinned." This is one of the less than thrilling side effects of growing older.  I now work very hard to avoid bumping my extremities--arms or legs.  And, yes, in the photo above you could see my injured leg.  But, I won't point it out.

Not very memorable injuries, except of course, I remember. More because I don't want my granddaughter to have such memories of Nana being a klutz, or being hurt.
Posted by KGMom at 8:59 PM

I have had two kitchen burns. One was from bacon grease early on a school morning. I went to school but in my first period spare I went to ER in the next door hospital. The second was in retirement when I was pureeing hot soup in the blender, and it came out the top. Once again, the hospital was nearby.

It seems like you were brae and didn't seek treatment. You were also quite stoic the second time. (And the first too probably.)

I hate getting burned, but I've done the same thing you have--grabbed something piping hot and burned my hands. Not as badly as you did, but it surely does sting.

I'd never thought about people's skin getting thinner as they age, although now that I think of it, there's a vague memory of someone with almost translucent skin. My grandmother? It was a long time ago. My mom is 90 but her skin isn't that thin yet. Her pain sensors, however, are on high alert....

Ouch! Those fingers look sore. Your granddaughter will always be cautious around the stove with that memory.

Liking the topic of injury to skin...lol. Here's your explanation: We have a Z shaped basement membrane that attaches the epidermis to the dermis to provide protection and stability. As we age, that mantle flattens out causing the two layers of skin to move independent of one another, hence the propensity for very easy skin tears with very little force or friction.

I remember a burn injury to fingers as well from touching a stove eye I thought was cool. No pain like it... ouch.