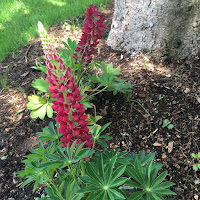 But it's summertime and things slow down a bit. Other activities occupy me--e.g. flowers, flower and flowers.

But I have kept reading.

THE FISHERMEN by Chigozie Obioma

A friend of mine recommended The Fishermen--of which I had not previously heard. Since I have read a fair bit of fiction coming out of Nigeria, I was drawn to reading it.
The novel centers on four brothers--Ikenna, Boja, Obembe, and Benjamin. Their family also includes their father and mother, as well as two little siblings--David, the youngest brother, and Nkem, a daughter who is the baby of the family.

The settings is Nigeria in the mid-1990s. The family lives in Akure, and their tribal background is Igbo, one of the larger tribal groups of the some 300 tribes in Nigeria. The father works in the Central Nigerian Bank, and the family is solidly middle-class. The Nigerian Civil War (which is sometimes called the Biafran War, as it involved the breakaway state of Biafra, to the east of the setting of this novel) occurred about a decade before the time frame of the novel. Occasionally, the effects of the civil war are alluded to--so it helps to know a bit about the impact of tribal rivalries.

The novel is not, however, as a commentary on African national development.
The pivot of the novel occurs when the four older brothers decide they want to go fishing--to become fishermen. The river where they go is a forbidden site--once a clean free-flowing river, it is now contaminated by human development with the waters being unclean and smelling foul. It is also a river that was once viewed with reverence, and is now cursed by locals. Because of that, the boys have been strictly forbidden to go fishing there.

That prohibition cannot stand up against their youthful drive and curiosity, however. So they become "fishermen." They acquire the requisite gear, which they manage to hide in their house at night.

The second pivot is the absence of the father. At the outset of the novel, told from the memory of Benjamin, the father is transferred from his job in Akure to another town. He is able to return home only occasionally. Since he was the one who disciplined the older children--with the mother consumed with caring for the two youngest children--the four older boys are able to pursue their fishermen dream.

At the river, they encounter Abulu, a crazy man who lives on the edges of society. He is portrayed as filthy, frequently naked, given to sexual transgressions in public. But he also shouts "prophecies" which seemingly come true. One day, after the boys have tormented him, he chases them and calls out after them a detailed prophecy that essentially say Ikenna will be killed by "a fisherman." Ikenna takes the prophecy to heart, and determines he will be killed by one of his brothers.

His greatly changed behaviors, as he grows more and more rebellious, coincides with a normal teenagers' quest for self-identity. However, for Ikenna, he goes beyond what might be seen as normal and becomes violent and confrontational.
When he is killed, the family unravels. In the course of the novel, three of the four older brothers die, and it is left to Benjamin to tell the story.

This book is a very compelling read, and particularly satisfying. Not surprisingly, the book was nominated for various awards, including the Man Booker prize. The author Chigozie Obioma was rightly lauded for this novel, his first.

SO BRAVE, YOUNG and HANDSOME by Leif Enger

I was drawn to So Brave, Young and Handsome because of the author. I had read Peace like a River by Leif Enger some years ago, and while I don't recall the plot of the novel, I do recall the sense of satisfaction at having read what seemed like a perfect book (for me). (Parenthetically, I recognize we all having varied reading interests, so what may be the epitome of good writing may be dreary to another reader.) I admit that at first I found the going a bit...tedious...where is this novel going?

So Brave, Young and Handsome began slowly. You meet the main character, or at least the one who is the common thread throughout the novel, Monte Becket. He is an author--in fact, a one book wonder. Having published a wildly successful novel MARTIN BLIGH, he is now like a ship on a becalmed ocean. He has lost whatever inspiration guided him in that first work. In short, he has severe writer's block. His loving, supportive wife Susannah encourages him to keep trying to recover that writer's skill. He sets writing goals--so many words per day. Gradually, the inspiration leaks out and he reduces the daily count until he finally stops. Oh, he writes. And completes novels. But his publisher continually rejects his latest offerings. So he is himself becalmed.

Into this introduction sails Glendon Hale. He is standing upright in a small boat, rowing down a river. We soon learn that Glendon Hale is on the run from the law. And when he sets out to escape his would be captors, he invited Monte to accompany him--just for 6 weeks.

Thus begins the adventure of a lifetime for Glendon.

Structured in the form of a journey across country, from Minnesota to California--we meet along the way various characters: Hood Roberts, Charles Siringo, Blue (aka Arandano) and Claudio. They all become part of Monte's journey. And eventually provide the inspiration that unblocks Monte the novelist.

THE MOTHER TONGUE: English and How It Got that Way
By Bill Bryson

Well, you’d think I learned my lesson. A few books ago (check back in the blogs to see the review) I reviewed Bryson’s NOTES FROM A SMALL ISLAND. But once again, the title intrigued me—I love English and learning about its history—so I bit.

Here’s the good part—there are sections of the book that are truly engaging.

And, here’s the bad part—once again, he goes on and on long after the point has been made.

And then there’s the erroneous part. After I had begun the book, I read the reviews on Goodreads. I was somewhat startled to find a fair number of people who absolutely panned the work. The main reason was the opinion of the reviewers that parts of the book were erroneous. Since I am no linguist, I thought “piffle—just over-smart people who know everything.”

But then I encountered two passages that gave me pause.

At one point, Bryson refers to the South African language Xoxa—well, I grew up in southern Africa, and as far as I know, there is NO such language. I suspect he means Xhosa which is a southern Africa language—frequently referred to as the click language. X is one of the letters clicked.

And the passage talks about Scrabble.  He claims that the highest scoring in a game was 3,881—and it included the word “psycholanalyzing.” HUH?  How is that even possible. The only way I can figure that out is that a player laid the letters “analyzing” and connected that to a “g” already on the board. Then in a later move, someone added “pyscho.”  Yet, Bryson reports that word earned 1,539 points. Can that be done? Maybe, if you’re a Scrabble player, you can figure it out and let me know.

That's all for now...more books await.