Two more books to add to the 2019 progression toward a goal (whatever my goal was/is). Both of these are non-fiction works, and while they couldn't be more different, I recommend them HIGHLY.

Among the non-fiction works I like to read are those that deal with various religious topics. I am a Christian and have an awareness of the history of Christianity and that it did not develop as a single whole "thing" dropped from heaven. Rather it is a religion that has taken centuries to develop--and that development was not a clear singular path toward "the truth." It was a circuitous, frequently contentious history. Factions developed, new alliances formed, then factions again…and on and on.

Reza Aslan’s GOD: A Human History widens the scope of the history of religion—from mere Christianity to the whole of humanity’s quest for and interaction with god—the many forms of god.  Essentially a chronological account, GOD begins with the earliest of humans and thieir growing awareness and comprehension of  divine power.  The book then follows in succession the chronological development of the various religions as perceived by humans.

Summarizing the book is impossible—each chapter in human history is so rich with content and meaning the reducing it to a summary does it injustice.

My understanding of religion has deepened, and my appreciation for various approaches to god has grown. All thanks to Aslan and his book GOD.

SAVING JEMIMA:Life and Love with a Hard-Luck Jay by Julie Zickefoose 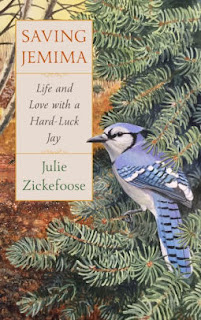 When I began blogging in 2006, like many novice bloggers, I waited for my first comment…a link to the larger world of people interested in some of the things that enthrall me. As it happened, the woman who commented on a blog I had written (about a trip to Spain) was someone who was deeply involved in the amateur world of bird-watching. In turn, through her I found a network of bloggers with many and varied interests but the common connection was birding. Thus did I “meet” Julie Zickefoose.

As a self-employed author, artist and naturalist, she is…well, here’s her own description from her website http://www.juliezickefoose.com/index.php “ I am a writer, artist and naturalist at home in the Appalachian foothills of Ohio. Every day, I roam our 80 acre wildlife sanctuary, and every day I find something new. This deep relationship with the land is the wellspring of my writing.”

Out of this description comes the makings of SAVING JEMIMA. Given that Julie is a wildlife rehabilitator, she gets frequent calls to rescue sick, or helpless, or abandoned animals and birds. It was in this capacity that someone called her about a baby blue jay. And that was the beginning of the book.

From the opening page, I was captivated. Make that from the first opening of the book, looking at the inside cover which is colored and speckled EXACTLY like a blue jay’s egg. It is that kind of attention to detail and authenticity of writing down her observations that makes this book unlike any other I have read—and that in the most delightful special way.

Lest you think this book is only about birds—you would be wrong. True, you learn a great deal about birds! And the way Julie explains things, even if you aren’t a “birder” (that would be me…I love to look at them, but know next to nothing about them), you will be entranced.

Beyond learning a great deal about birds in general, blue jays in particular, you also learn what it is like to go through a life crisis—which Julie did—and how being connected to nature helps one heal and regain an even keel.
Posted by KGMom at 11:31 AM