The Dilemma of Bushmeat

When I teach English 101, the reading text we use has a photograph that shows a young man in an outdoor market somewhere in Asia. He is holding up a puppy, looking at it critically. It is clear in this photo that he is not thinking future pet—he is thinking dinner. I ask students for their reactions. Frequently the first thing they say is---ewwwww! So, I ask them why, and they say—it’s just not right to eat dog. So I ask them why—and they are stumped.

Of course, I try to get them to explore the cultural ramifications of what we eat. Why do we eat cows, pigs, sheep, various fowl—and not dogs or cats? The discussion can go many directions—being vegan, eating meat during travels that one does not traditionally eat, having religious restrictions on what meats we eat.

I had sort of settled this question of the cultural influence on what meats we eat in my own mind until a recent post by Julie Zickefoose on agoutis got me thinking again. While you can read her post for yourself, one of the things she points out is that she had not seen an agouti in the wild because of the “edible–animal syndrome: anything big enough to roast on a spit is pretty much extirpated wherever people live.” So that’s what got me to thinking. Is there anything wrong with eating bushmeat? If you say yes—what? If you say no—why?

I struggle with the implications for survival of species if humans have no limit on killing bushmeat for food. While I was growing up in Rhodesia, Africa, we occasionally killed local animals. Mostly our meat supply came from livestock on the mission station, such as cattle or pigs, but there were also various antelope such as kudus that missionaries killed. Such meat was never a staple, but the meat could be eaten and was used. That was the extent of my exposure to bushmeat in Africa.

Bushmeat now means something altogether different. One of the websites dedicated to education about this issue states baldly that “In Africa, the unsustainable bushmeat trade is wiping out wildlife including gorillas, chimpanzees, antelopes and many other species.” (Bushmeat Crisis Task Force) It is the permanent loss of species that haunts me. The dilemma is how do we balance the needs of humans against the existence of other animals?

For desperate people in some parts of the world, Africa for example, eating bushmeat is the one available means to stave off starvation. Here is a thought-provoking piece on the role of bushmeat in Africa. 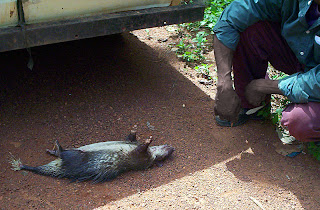 Of course, this practice is as old as humanity. Before humans domesticated animals, they killed game—this term is a far less objectionable one than bushmeat. Obviously, I am not opposed to humans killing and eating game that is plentiful. But I really shudder at some of the types of bushmeat that is now being sold in some African markets—for example, gorillas. The one photo that I include here is of an African porcupine being sold as bushmeat. There are far more graphic photos on the Internet of bushmeat for sale—particularly chilling are gorilla heads. The great apes are virtually our cousins, so how can we possibly eat them?

So, I wrestle with the problem—how can we humans co-exist with other animals on this earth. Humans eating other animals and in so doing possibly wiping out species is not the only way we threaten animals. There are so many ways that humans and animals clash. Another thoughtful blogger addressed one of these problems—humans encroaching more and more on habitat that displaces animals. Then when those animals come around where we live, we take action that sometimes harms them. See Natural Notes 3 thoughtful post on Birds or Bears.

I took a while to absorb this information, Donna. You obviously put a lot of effort into this research and your sentiments are clear.

"It is the permanent loss of species that haunts me. The dilemma is how do we balance the needs of humans against the existence of other animals?"

I also wonder how many diseased animals are being consumed, further complicating the already existent health issues in these countries?

A frequent discussion among family and friends is the issue of humans enroaching on animal habitat and what's right or wrong.

I did a post some time back on hunting season here in VT. Our deer herd is in fair shape and I don't protest hunting for food IF the herd can handle it. But it's another story when we kill for trophys, an animal killed just for a head on the den wall.

This planet belongs to every living thing and as much as I sympathize with starving people, once species have been eliminated, you will still have starving people but the natural order of the planet will be destroyed. And, as you said, us along with it. The circle of life.

I know this can be a hot button issue, but I truly believe that we need to curb population growth and construction if we expect our planet to survive.

What foods do you remember from Zambia-Zimbabwe? Did you try fried termites? Delightful, I'm told, although I didn't have any. What about amacimbi -- the fried great big wooly caterpillars? I enjoyed simple things like roasted peanuts and roasted maize instead of the more exotic options.

So far as the web of creation goes: full agreement on my part.

An excellent and thoughtful post on a difficult and complex subject. Its encouraging that you are attempting to instill awareness in your students. I think if humans would truly reassess their 'needs' and their 'wants' they would find that they 'need' less and less - but most of them will never do it.

Many of us are lucky enough to have easy access food where others like you discribed don't! We don't always realize that and this is a great post to remind us how lucky we are! Great lesson for the kids!

Oh Donna, I don't know! So much of it is a cultural issue.

There are a few organizations that promote farming rabbits for food in underdeveloped countries - that bothers me, of course, but I understand that rabbits are *easy* to raise that way. I can stomach it easier in that situation than I can with people in this country who do the same. Why is that?

Part of me could very easily be vegetarian, but I see that as a luxury; a choice I can make because because of my *diet of affluence* - the majority of people in the world do not have such choices and I shouldn't judge.

However, there are some species that are too precious to be taken for food. But what other options are available for people in those parts of the world?

BTW: How are you liking that Louise Erdrich book linked in your sidebar? I've read a few of her books, but nothing lately.

To all--the bushmeat issue is a very complicated and touchy one. I felt like posting a warning first--contents are depressing; proceed to read with caution.
Of course, the big issue here is adequacy of food supplies, which many of you touch on.

Mary--diseased animals is a real danger. We know that some diseases cross species--e.g. so-called bird flu.

Pam--deer are the one example we have here of "bushmeat" although we tend to think "game."

Laurao & Mon@rch--I do try to use current topics in teaching, both to challenge the students & to keep me from getting bored!

LauraH--yeah, I know about the rabbits. In fact, while I was in Louisville, one restaurant we went to served rabbit, but I did not order it--partly thinking of all the photos you post!

Donna,
I had to back into that one. When I got to the word 'puppy' I dropped to the comment section and then slowly worked my way back into this very thought-provoking post.

I'm such a wuss. Over the last decade I stopped eating mammals. I wish I could say that it was out of a heightened awareness of the inefficient use of space and energy it requires to raise beef and pork.

No, as I've aged I've projected my own mammalian nurturing tendencies onto these fellow mammals. Then I project a broader capacity for suffering and voila: I'm down to poultry and fish. If some scientist demonstrates the capacity for anguish in chicken and flounder - I'm down to beans.

I can not imagine the desperation of third world inhabitants trying to feed their families. What solutions are at hand? Is raising poultry a viable plan? I'm so completely ignorant of this situation and tend to want to run from it. Aren't there protein production methods(i.e. poultry) that could ameliorate the pressure on habitat and species?

Laura has it right when she comments that we have the luxury of choice.

Thanks for giving me 'food for thought' on a morning when it's nice to have a diversion from the horror at Virginia Tech.

"Destroy it and we destroy ourselves."

That's such an important statement - and many don't really understand it. A diverse ecosystem - a biologically diverse one - is more stable for all involved, and it is when that stability is altered that so many problems occur (invasive plants, emerging pathogens) - I too wish that we were better as a society in protecting ALL habitats.

Loss of animal species is of little concern to people struggling to survive from day to day, either by eating or selling bushmeat. Trophy hunters and those who demand special parts of certain animals are the ones who's actions I find more difficult to tolerate. Large livestock operations have their own set of problems, from contagioius disease to pollution of streams and land from animal waste. As has already been said, this is a very complex issue!
Ruth