In the blogosphere, there are stories and then there are unauthorized stories. A little while back my daughter brought to my attention that she and her brother discussed my telling of unauthorized stories. I had to chuckle at that, but at the same time take to heart the concern of family members that I not spill everything. Oh, I wouldn't do that.

But last Sunday, CBS Sunday Morning News did a story that reminded me of one of these unauthorized stories. CBS did a lovely segment on a Polish priest named Piotr Nawrot who went into the jungles of Bolivia to find lost Baroque music. If that description piques your interest, you can follow the link here to watch the whole story.

Every mother hopes to raise her children with a minimum of psychological trauma to their young minds. I certainly did. But something I did when they were in their early teens, or maybe younger, apparently seared them--at least they tell it that way. My children are now past their childhoods, my son in his 30s and my daughter in her 20s, and I believe they emerged from their childhoods unscathed--mostly. 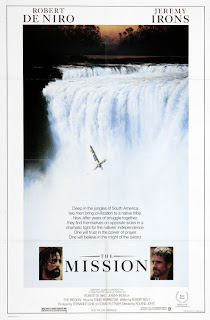 You see, I love, make that LOVE, the movie "The Mission." This movie, starring a whole host of top notch actors including Jeremy Irons and Robert de Niro, tells the story Jesuits missionaries in South America. Intent on spreading Christianity, and also part of the Spanish colonial outreach, the Jesuits went into the heart of South America, straddling what are today parts of the countries of Brazil, Argentina and Paraguay, and set up 30 missions. The story of these missions is in itself fascinating, but to follow it I would wander away from the intent of this blog. You can follow the link to learn more.

I loved the movie so much that I thought it was a "must see" for my children. Since it came out in 1986, I likely had my son watch with me either the first or second time I saw it. He was in his teens then, so that timing fits. I was so ecstatic about the movie, I probably paid little attention to his reaction. I don't recall that he expressed any opinion about the movie, during or after watching it.

Since I had the movie on VHS, I could watch it again and again. When my daughter was somewhere in her teens, I said--you HAVE to see this movie "The Mission." And proceeded to persuade her to sit down with me one night to watch it. Later, she was talking with her brother. Now, I don't know exactly how that conversation went, so I won't recreate it. But apparently at some point, perhaps she said something to him about the movie. And her brother laughed and said--oh, did Mom make you watch the movie, too. A knowing shared moment between my children--the trauma that their mother put them through. Haarruummmpppphhhhh. I do not inflict trauma on my children--I introduce them to. . . culture.

Oh well, so they don't share my love for this marvelous movie. I will hasten to point out, the movie is not for the faint of heart, or stomach. The final scene is absolutely wrenching. In history, the Jesuits over-stepped their bounds. They were frequently doing that, and to slap down their influence, the Pope agreed that some of the territory where the missions were located had to be handed over from Spanish colonial control to Portuguese colonial control. The process was not pretty.

Now, what is the unauthorized part of this post? Well, telling this story of course. But, I contend that these are not just stories about my children. They are my stories too, even when the punchline is on me. So, how can they possibly be unauthorized?
Posted by KGMom at 8:54 AM

Right on, Donna! An adequate mea culpa requires details and you provided them in a judicious manner. Now I guess I have to check out "The Mission' and see how much trauma you inflicted on those tender sensibilities :0)

Amen! LOL! I haven't seen the movie and don't know if I would enjoy its wretchedness but it must be excellent if you watched it countless times.

Your poor children. Sometimes we don't realize the permanent scars we inflict... Hey, this is your blog and you can tell any type of story you want, authorized or unauthorized! :o)

Oh dear. This is getting so spooky Donna - as The Mission has been my favorite movie of all time since I first saw it - I have the music for it and so on and I force everyone within range to watch it with me also as it repeats on TV. I think I have watched it dozens of times. Forced my son, similar ages to your children, to see it also. For anyone that has not seen it - please do see it, it is the best movie of all time and Donna did you have a twin that was separated at birth from you?? It is me!!! sadly I am without all your intellect though!!! Cheers.

So far as our children go, I'm sure they could all come up with their own unauthorized stories: maybe they do!

I teach the history of Christian missions and keep thinking I should watch the movie, but sorry, I don't do movies! Just don't have the nerves to sit still through various tensions, whether violent or romantic or colonial or whatever.

In any case, one of the basic dynamics one sees is the conflict between Christian faith and its explicit commitment to universal equality, and the cultures that missionaries come from with their own sense of ethnic superiority. I haven't found any people yet who don't feel as though somehow their own group defines what it means to be human: even groups on the margins have a sort of ethnocentrism. I'll have to try and work out that thought more fully in my own blog - -without seeing the movie!

And in spite of ocean and forest's whimsical thought: I'm just as glad you're not a twin. I love you dearly, but two of you keeping me straight through my formative years would have been too much of a good thing!

I have been accused of writing unauthorized stories a time or two myself. :)

I haven't seen the movie and probably won't - but I sure enjoy your stories, authorized or not!

I stumbled upon your website through trying to find the words to Crosby, Stills and Nash's song, Teach Your Children Well. How I got here, only the good Lord knows but it has been a delight to me. Reading this story reminded me of being with my son two weeks ago (he is my baby and is 34) and going through a divorce. Telling him of how important my wife, his step-mon, is to me and that she has been really the only mom to him. I played the song of Foster and Allen "After All These Years." After listening politely, he said matter of factly "That's nice." I realized he is not in the same place I am. When his children were toddlers, he said to me, "Dad, I am glad you have grandchildren because now, in your sermons, you will give me some rest. I assured him that was not the case, I only had more unauthorized stories.
Thank you for your blog, Peace, Curtis