Down in the Bayou 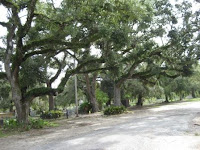 On the first day of our multi-day advisory committee meeting, we went touring. At 7:30 in the morning, we left New Orleans and drove east along I-10. Just as we crossed the Mississippi state line, we exited on to U.S. Route 190, connecting to Route 90. Within 10 miles, we were entering the small “town” of Pearlington.

Pearlington is really a “census-designated place.” I am not sure, but I suspect that is government-ese for “this 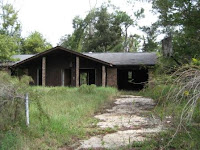 So, why all this information on Pearlington? Well, this little place was effectively ground zero when Katrina hit. The eye wall of the hurricane passed right over Pearlington. Here’s how someone who is keeping a blog about the recovery described it:

It is impossible to comprehend, in the comfort of our own homes, what it must be like to lose everything in a single day.
On Monday, August 29th, just after 10:00 a.m. local time, Hurricane Katrina made landfall, with the eastern eye wall directly over Pearlington, MS - sparing New Orleans the direct hit. Every home, building and vehicle in this town of 1600 was destroyed. If that wasn’t enough, a storm surge travelled 4.5 miles inland and drowned what little was left under 12-20 feet of the most toxic stew imaginable.
Since that day, a hardy coalition of volunteers - representing almost every faith, state, Canadian province, two European nations and an eastern Asian country - have travelled regularly to Pearlington to rebuild this forgotten bayou town.

Source:
http://pearlington.blogspot.com/
While there are several churches in Pearlington, many of them some type of Baptist, there is no Presbyterian church there. Yet, I am told, the Presbyterians were among the first disaster recovery people there. One of the lessons we learned (mentioned in the previous blog) is that for volunteers to come and help rebuild, they need a place to stay. So Presbyterian Disaster Assistance (PDA) has set up a series of Volunteer Villages. One of these is in Pearlington. 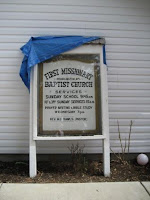 We first met with some of the volunteer leaders, then headed off to lunch. The place for lunch was the fellowship hall of the First Missionary Baptist Church. Its sanctuary (pictured above in a photo gleaned from another website) had been rendered unusable by the storm, but the Fellowship Hall, once scrubbed out, stood strong. So the pastor and his congregation decided their ministry would be feeding whoever came to town to work, and anyone else, for that matter. They have continued this ministry now for more than 2 years. 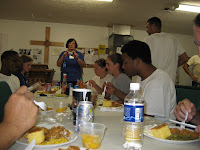 Lunch was freshly caught fish, Southern fried, rice, green beans and ham, corn, cole slaw, salad, fruit salad, and corn bread. I was really struck by the simple but sumptuous meal. During our meeting, I had led devotions for our group, using the account of the miracle of loaves and fishes where Jesus fed the 5,000. And now at lunch, here we all sat, side by side, white and black, town people, volunteers from every place, even a crew of county inmates who were doing yard clean-up, eating "loaves" and fish. 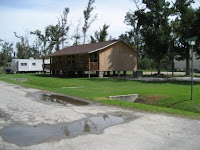 Everywhere we walked in this little town, we could see newly built houses. We also saw trailers scattered here and there. We saw dogs that just wandered into the volunteer village and stayed. The scene was chaotic, and very like a developing nation. It did not look much like the United States that most of us are accustomed to seeing.

But the place moved me. Pearlington will come back. People have stayed there. The one by-product of the storm that the workers there told us of is the new founded cooperation. They said—before the storm, black and white people tended not to interact much—but now they do. Storms bring adversity, but they also unite us. 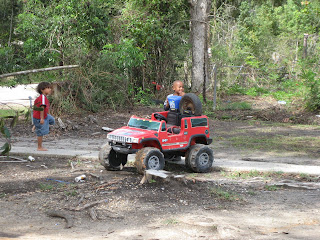 This small child played in the muddy driveway leading to his family's trailer, right next to the Fellowship Hall of the First Missionary Baptist Church. 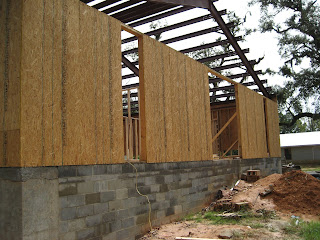 The First Missionary Baptist Church, as it is being rebuilt.

I love small towns! Your pic of the dog reminded me- my neighbors adopted a rescued dog from NO - he is very loving and grateful.

Gosh Donna, it's hard for me to even comprehend that kind of destruction and areas still struggling to recover. Thank you for sharing this story and the efforts of everyone still working to restore Pearlington.

There is a very good friend and generous man in Owings Mills, Maryland who paid his team of electricians to join homebuilders in New Orleans for nearly three weeks last summer. The teams of electricians and other contractors rebuilt 25 homes in that amount of time. It was a huge coordination effort! We don't often hear of the good souls from around the country but churches and businesses are always being generous.

Thanks for the information and the tour. I look forward to more reports.

What an inspiring and encouraging post! A team from our church is leaving on their fourth trip to Mississippi in a few weeks. It's inconceivable how much work there is yet to do. But what joy in seeing those who rise up to do it!

Thanks for sharing this. Blessings to you this week!

That is so inspiring - that people were united in the aftermath of the devastation. You are really having a unique, priceless experience witnessing it first-hand.

How quickly we forget the devastation that will take years to recover from. It is heartwarming to know so many people care enough to spend time as well as money to help those in need. (Where were the hurricanes this year?)

I'd never even heard of Pearlington, yet it was ground zero?

People can be so amazing in their response to disaster - glad to know that maybe this one community will see some long-lasting positive effects.

Thanks for sharing this.

An amazing story about amazing people. I simply cannot imagine such devastation, it is heartbreaking. I have always felt that there was something special about small towns, this proves it.

What a wonderful example of love and rejuvenation. I wish the world could take heed and do the same.