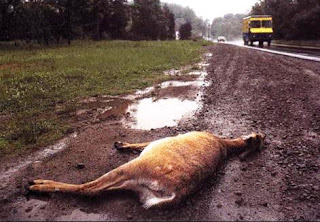 I hate road kill. Nothing makes me sadder when I am driving along any road than to see road kill. Frequently these flattened fauna are so indistinguishable as to be no longer recognizable as one of God’s creature. Of course, there is the occasional time when I see a deer along side the road, head drawn back in the rictus of death, belly bloated from lying there too long. Such a sight just makes me sad.
In some of our European travels, I have purposefully watched along roadside to see whether or not it is apparent that Europe has the same excess of animal highway deaths as we do. Once, when I didn’t see any dead animals, I asked in innocence—do you have any road kill. Oh, yes—we do. But I wasn’t convinced. Then it occurred to me that, given how long Europe has been inhabited by humans, by now many of the wild animals have been driven away, thereby reducing the numbers that could be killed.
One of the reasons I so hate road kill is that unbridled growth in our part of the country has meant that more and more open fields and farm lands are being converted to sprawling suburban development. When my husband and I first moved to this part of Pennsylvania, the magnificent rolling mountain just to the north of where we live was open space. Albeit forested. Now, there are bare patches creeping up the mountain as more and more individual houses have been constructed. Recently a farm wonderfully named Whispering Winds was sold piecemeal to several developers. I can’t help but wonder when the houses begin to be built there where will the small creatures go? Displaced yet again, they will wander out on to local roads and get smooshed.

There is another aspect of road kill, of course: the sudden and inadvertent convergence of car and deer. My brother recently wrote of an experience he had, along with his wife and another passenger. Thankfully, they were all OK, though the car was a bit worse for wear.

One of my favorite poems is about road kill, in a way.

Traveling Through The Dark
by
William Stafford

Traveling through the dark I found a deer
dead on the edge of the Wilson River road.
It is usually best to roll them into the canyon:
that road is narrow; to swerve might make more dead.

By glow of the tail-light I stumbled back of the car
and stood by the heap, a doe, a recent killing;
she had stiffened already, almost cold.
I dragged her off; she was large in the belly.

My fingers touching her side brought me the reason--
her side was warm; her fawn lay there waiting,
alive, still, never to be born.
Beside that mountain road I hesitated.

The car aimed ahead its lowered parking lights;
under the hood purred the steady engine.
I stood in the glare of the warm exhaust turning red;
around our group I could hear the wilderness listen.
I thought hard for us all—my only swerving—,
then pushed her over the edge into the river.
------------

I have used this poem in the composition course I teach—I ask the students, how many of you have hit an animal while you are driving? Usually many hands go up. Then I ask—did the experience make you think about the human condition, about mortality? No hands. Or, I ask, did any of you go right home and write a poem after the experience? Again, no hands.

Well, I still don’t like road kill. But I draw deep sustenance from the sentiment of William Stafford’s poem.

“I thought had for us all—my only swerving.”
Posted by KGMom at 1:30 PM

I happened on your blog today--it reminded me of my mother, who always fought to keep urban sprawl from encroaching on her 24 acres of pristine Maine land--only to see it occur bit by bit, piece by piece.

Have you read "Watership Down"? It really opened my eyes to the hardships that occur to wild animals due to suburban sprawl.

We always see so much more road kill in the US than in Canada and I wonder why. We often cross the border into Michigan at Port Huron and drive to Flint. The carnage (big animals) is unbelievable on the highway. We noticed it too on the way to NYC last year. We have fences along our big highways. Two friends of mine have been killed in deer-car accidents. I always worry about my daughter driving the 100km to her home in the evening.

Even our little town is expanding, and I don't see the occasional deer like I did three and four years ago when we first came here.

Road Kill is no fun. A measure of sadness at different levels ....

Such a sad post. There were so many car-deer collisions in Wisconsin. There is little road kill in our little community (25 mph winding private roads) but I do see more than I would like on the highway when I leave the community.

I've hit one deer, and been the passenger of hitting another, last year. So two in one year. Both have stories attached to them, at least for me, that definitely made me think of mortality, and God. I would have raised my hand if I had been in your class. I didn't go home and write a poem though...but I think I still could, because it affected me that deeply. This poem is so beautiful. It still makes me tear up to think about both of those deer. Where I live now there are many deer that I see just walking through the fields. I feel like they have given me more time to look at them, or perhaps I have just slowed down.

Fortunately, I've never hit a deer, but even the smallest strike makes me sick in the pit of my stomach.
Sometimes the collision cannot be avoided.
But, sometimes, as is the case of turtles and snakes, I think the driver would have given more care to avoiding it, if it had been a stone.
Sad commentary on where we (humans) place ourselves in the big picture.

I hate seeing roadkills too Donna--I can't help but wonder if the possum or deer smooshed on the highway near my house was one of the animals I saw the other night eating corn from a feeder in my backyard.....

I saw a baby skunk eagerly walking around and days later I saw skunk roadkill on the nearby street. Not your typical animal but hate to think it was the same little guy :-(