I have learned, when I use examples during my teaching, to qualify the time frame of my reference. I have had too many blank stares when students have NO clue to what I am referring. So when I talk about Vietnam, I always say--that is my generation's war. 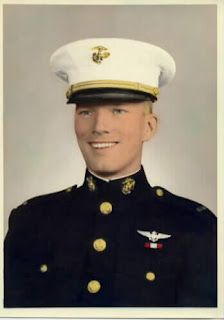 Larry was our college class president. He volunteered for the Marines immediately upon graduation from college. Somewhere along the way, before he was deployed, he got married. He was sent to Vietnam February 27, 1968. At that time, the usual tour of duty in Vietnam was one year. Larry was killed in a helicopter crash on February 4, 1969, just days before he was due to return home. At the time, the crash was attributed to hostile action. However, witnesses have since reported that the true cause was a mid-air collision between two U.S. helicopters.
When his funeral was held, I was one of the classmates who volunteered to speak. I have no recollection at all what I might have said. I just remember having this incredible sense of the terrible waste of a life. He was such a decent guy--with a sweet winning smile. And he lived all of 25 years.
Jay was a high school friend of my husband's. They had grown up together; their families attended the same church. Jay had met a perky young woman, and they were quickly engaged. Then, he volunteered for the Marines. He too was deployed to Vietnam. On November 16, 1966 he was killed in a skirmish with Vietcong. Jay had spent time at the base camp and had built an observation tower. During the skirmish, he had climbed that tower to get a better view of what was happening. An explosion knocked him from the tower, and he died. He was one month shy of turning 20.
I had exchanged a few letters with Jay, which I saved for years. In 2001, I heard from a buddy of his, who read a comment I had written on a memorial page. I sent the buddy those letters. He used them in a lovingly written memorial that you can read here.
I was attending graduate school when I learned that Jay had been killed. To work through that awful news, I sat at the piano in the house I lived in during grad school, and played over and over the lovely aria from Handel's Messiah "I Know That My Redeemer Lives".
My recollection is that Jay's funeral had an open coffin with his nearly unmarked body lying in repose. Memory can be faulty--I asked my father about this recollection. My father was pastor of the church Jay 's family (and my husband's family) attended at the time. My father could 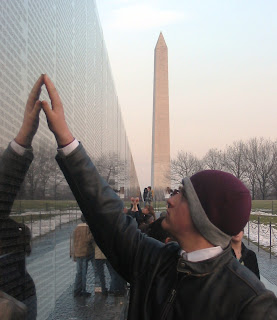 not confirm my memory. Maybe I only imagined it.
After many years, I finally went to see the Vietnam Memorial in DC. I slowly walked along those gleaming black sections of the Wall that reflect the faces of those who grieve their losses. I found Larry's name, and I found Jay's name. I slowly ran my fingers over those names.
Two young men--two lives sadly cut short.
My generation's war. Oh, if only it were the last war.
-----------------
Photo of Larry Houck from
http://www.arlingtoncemetery.net/lehouck.htm
Photo of Vietnam Memorial from:
http://en.wikipedia.org/wiki/File:TouchWall.jpg
Posted by KGMom at 7:18 PM

I remember being in Washington last October (a belated birthday present from my son and wife.) Wespent most of our day on the mall - a lot of time spent at the WWII memorial and then on down where the Vietnam War Wall was. I was so moved by them all. My husband spent time in Vietnam. I didn't know him then. He never spoke much of his time there.

What a touching post - yes, if only it could have been the last war.

Wars are rarely fought for the right reasons, and any loss is a huge loss.

Your post brings back so many memories. I also lost some dear friends in that war. Such a tragic loss for so little purpose.

I've never lived through a war as personally as you have. I remember watching the Dan Rather reports on the evening news and every Sunday we would bow our heads in silence and pray for an end to the war in Vietnam. I was around 10 at the time.

For eight years (late 80s to mid-90s) I lived in North Arlington and would take my exercise walks past the Iwo Jima memorial and into Arlington National Cemetary. Most days with my walkman blaring I would trudge along to the beat. Once in a while I would get a lump in my throat focusing on all the small white tombstones. In the summertime at night with the windows open I would hear taps being played. It was truly special to live that close to hallowed ground.

Really...really WELL DONE. A true tribute for for their memory as I'm sure they are smiling down upon you in thanks.

Your post brought me to a stunningly quiet and purposeful moment--thank you.

Your memories and reflections are written so well. I always thought the Vietnam war was such a waste of life, time, money, effort. For what end? I do hope America can find peace from conflict.