There'll Always Be an England

As someone who grew up in a country that was still under the active colonial influence of England, I confess to being something of an Anglophile. I have visited England more than any other country (excepting Canada) and I continue to enjoy the opportunities to visit. I could spend a year in London and not see all that I am interested in seeing.

My Anglophilia cranked up a couple of extra notches when I chose to major in English literature which meant that I had to learn a fair bit of English history.

The expression "there'll always be an England" rings true for me. With surprise, I learn that this expression has not always been around--it was written in 1939 as England on the verge of war. It was England's dogged determination to survive, and even triumph, in World War II that really exhibits something special about the English character--whatever that is. I have to caution myself that the English spirit I admire had/has its dark side. For example, the effects of colonialism in the various countries that made up the far-flung British Empire were not always beneficent. But this post is not about what England has done wrong.

It is about a Christmas present I received from my daughter on our recent trip to visit her and our son-in-law. I received a wonderful coffee mug displaying a single image-- 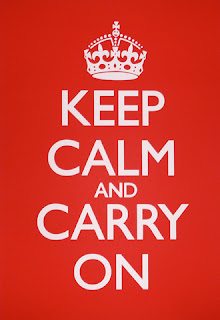 This simple message--Keep Calm and Carry On--was what was printed on millions of posters prepared during World War II. Like the song "There'll Always be an England" the posters were also prepared in 1939. But--they were never used. Copies of the posters were discovered in 2000 in a second-hand bookshop, and they became an instant rage.

Now, there are posters, shirts, coffee cups, bags, and even cuff links with the sentiment printed on them.

In this time where we too face a seemingly interminable enemy, where we are engaged in a battle that defies reason and mystifies me, the words "Keep Calm and Carry On" strike exactly the right note. I refuse to alter my life out of fear of what could happen. Of course something untoward could happen. But that is true anywhere I go, anytime.

I think you get the drift of my thinking without my having to go on and on.

I will leave you with just five words--KEEP CALM AND CARRY ON.

Labels: freedom, power of one

You would have enjoyed my mother. She was an anglophile. Her mother and father were English coming to Canada in 1903. They were from Stoke-on-Trent in the Potteries.
(Staffordshire)
My mother was a great admirer of Churchill and read all he wrote (which was substantial).

When I took my son, Parker, to England years ago, I remember taking a picture of him in from of the statue of Winston Churchill in London, near Westminster, because I knew my mother would approve.

I look forward to going to England later this year if things work out.

As you probably know from my blog entries our family (outside of Boston) entertained British sailors during WW II and that is exactly the spirit that they displayed. Thanks for all the info. It is very interesting.

Boy I could sure use that poster as a reminder these days!! Do you know why they were never used?

I think I saw a copy of the poster on another blog I follow, Autumn Cottage Diarist, written by a woman living in the country in England. I think you would love her blog. I don't have her link handy but just google the name and it will come up.

What a wonderful sentiment! I will remember that one.

You do have admire the moxy of the British people!

What a wonderful saying and still so appropriate today.

Very wise words. I'm so glad you are sharing this trip.

I think Canadians have done their best to carry on the tradition of keeping calm and carrying on.