The guide books will tell you that Canterbury is the second most visited city in England. Since it is really quite a small place, that statistic--if accurate--is astounding. But then, Chaucer would have understood the draw.

When Geoffrey Chaucer wrote The Canterbury Tales he did something quite remarkable. He wrote them in English. Now maybe, it is not English as you would recognize it--here, have a go at it. These are the opening lines of the Prologue to The Canterbury Tales.


Whan that Aprill, with his shoures soote
The drought of March hath perced to the roote
And bathed every veyne in swich licour,
Of which vertu engendred is the flour;
Whan Zephirus eek with his sweete breeth
Inspired hath in every holt and heeth
The tendre croppes, and the yonge sonne
Hath in the Ram his halfe cours yronne,
And smale foweles maken melodye,
That slepen al the nyght with open eye-
(So priketh hem Nature in hir corages);
Thanne longen folk to goon on pilgrimages
And palmeres for to seken straunge strondes
To ferne halwes, kowthe in sondry londes;
And specially from every shires ende
Of Engelond, to Caunterbury they wende,
The hooly blisful martir for to seke
That hem hath holpen, whan that they were seeke.
Bifil that in that seson, on a day,
In Southwerk at the Tabard as I lay
Redy to wenden on my pilgrymage
To Caunterbury with ful devout corage,
At nyght was come into that hostelrye
Wel nyne and twenty in a compaignye
Of sondry folk, by aventure yfalle
In felaweshipe, and pilgrimes were they alle,
That toward Caunterbury wolden ryde.

How did you do? Not very well? Too many words that aren't easily recognizable? You are reading Middle English--which at times seems closer to German than modern English, especially in pronunciation, where you articulate all the consonants. So, "pilgrymage" (which we say as a three syllable word) becomes PIL GRIM MAH JA. Quite fun, reading and speaking in Middle English.

OK--what Chaucer was writing about was a group of twenty-nine pilgrims who are making a trip in April to Canterbury to visit the grave of Thomas Becket, who had been murdered in the cathedral. The remains of his body had been gathered up by faithful followers. Soon, miracles began to happen--and by the time Chaucer writes, two hundred years after Becket's death, pilgrims were traveling in droves to this site.

And they still go today--only, now they are called tourists. Maybe they don't expect miracles, but they can be awed. Tourists first go through a gate (not sure if pilgrims did likewise or not)--pictured below. 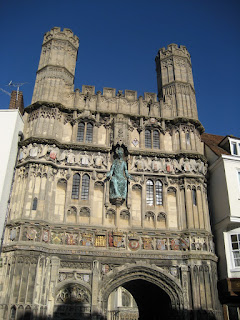 The cathedral that stands today would not have been what Chaucer's pilgrims saw. The soaring Gothic style of the cathedral (pictured below) was rebuilt in the 14th century, so it was not the cathedral standing there in Becket's day. 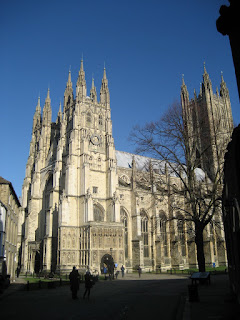 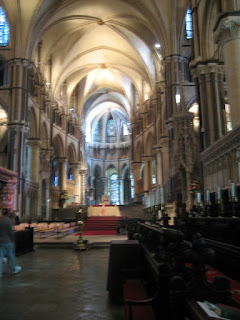 For 3 centuries after Becket's death, a shrine in Trinity Chapel was dedicated to Thomas Becket, who had been made a saint in 1173. But, with Henry VIII's break with the Catholic Church, and his establishment of the Church of England, Henry ordered thousands of Catholic sites destroyed. Among them was the shrine of Thomas Becket. Today, a simple candle marks the spot of the Becket Shrine. 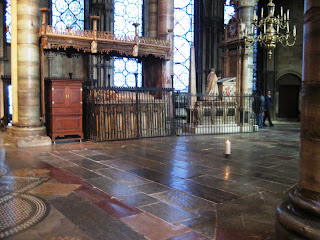 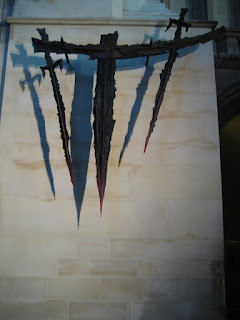 The actual spot where Becket was slain still exists, but is today marked by a modern memorial. This site is simply called The Martyrdom, with the jagged steel swords on either side of the broken sword hanging over a simple altar. Thomas was praying at the altar when Henry II's knights stormed in and killed him. 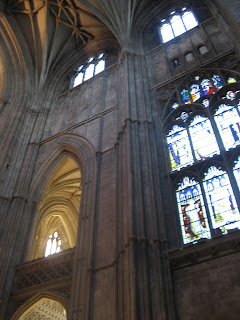 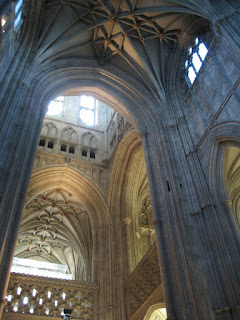 One part of the cathedral that would have been standing in Becket's day is the crypt. Below the quire of the cathedral, the crypt shows Romanesque architecture. The low arches are dramatically lit by small lights. 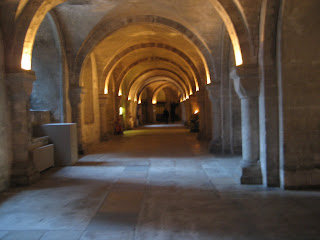 The window placements are wonderful, catching the afternoon light. This entire area is marked by signs calling for SILENCE (and no cameras--but I put mine on silent and no flash, and took a few discrete photos). 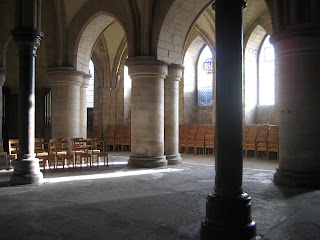 This small chapel in the crypt is called the Jesus Chapel--the ceiling is marvelously decorated. 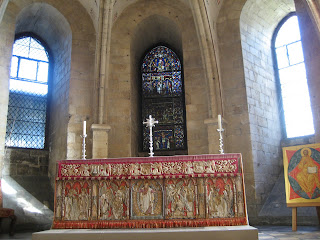 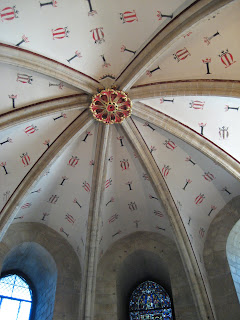 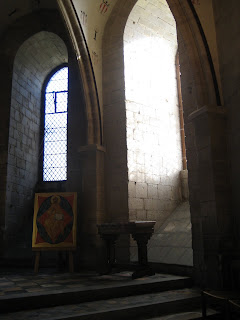 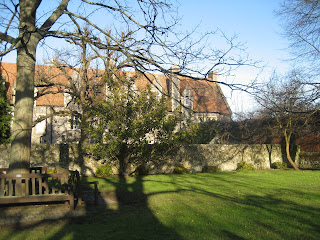 There is a lovely small healing garden, with walls on three sides. It is easy to imagine people seeking solace here.
So, that is the pilgrim report. In re-reading the opening lines of the Prologue, I am amused to find those pilgrims started out in Southwerk (part of London). Why? Because we too began our pilgrimage in Southwark (the current spelling) as that is where our hotel was. Not the Tabard, but something a bit more contemporary.
With a next post, I promise to be more secular.
Posted by KGMom at 10:04 PM

Beautiful Donna!
I can feel your awe and excitiement.

How wonderful it must be to be standing in such a place. I love your travels. Great narrative and lovely photographs.

How beautiful. Brings back memories ~had to memorize that in college as well as a prologue to one of the pilgrims' tales. Thirty years later I can only remember the first four lines. Thanks for sharing your trip.

My intro Eng prof read Chaucer to us with what was supposedly authentic pronunciation and voice, or a reasonable approximation, I guess.

Gorgeous - I could feel the beauty.A very touching post as I pondered pilgrim/tourist.

Thanks for the tour. It is really awesome. While my faith choice is the simple New England meetinghouse, I can well imagine the elation of worshipping in such a cathedral.

In my more social and intellectually heady days, I once threw a party where everyone had to perform something. One friend who was a graduate student at Yale read a long romantic poem in Middle English,(show off) and then translated it for us. It was wonderful to hear it.

The photos are wonderful! The sword memorial to Becket's death is quite poignant

I enjoyed the pictures in this post and the next. I also remember memorizing the opening lines of Canterbury Tales, many years ago. I always thought is sounded more French than German, though.