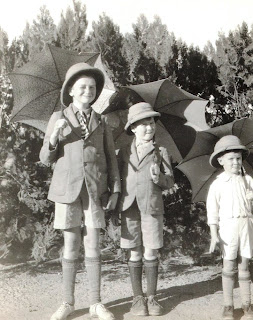 Even though my parents grew up in the same small church denomination, in many ways, their childhoods were quite different. My father's parents were missionaries. He was born in the U.S., but was a year and a half old when his parents went to southern Africa. Consequently, he lived there until he was ten. (My father, in the middle, pictured with his older brother, and his younger brother who was born in Rhodesia.)

Upon their return to America, for several months, he lived here and there, as his parents traveled around "spreading the word" of mission work. For three years, they lived in Oklahoma, from 1930 until 1933. Then, his father got a job teaching college in California, and the whole family moved there--right in the middle of the Depression as many people were moving from dust bowl states to California.

When my father was eighteen, and finished with high school, his father lost his job. So the family was once again rootless. They returned to Pennsylvania where his father took a temporary year long job. But times were lean, and his parents told him it was time for him to move out. He had no plans of where to go--his hope of going to college was dashed when his father lost his job.

It is around this time that my father saw "the girl in the yellow dress." My mother had grown up on a farm near Martinsburg, PA. Her family were very rooted, and she did not move around at all. Her only time away from home was when she helped at camp meetings--as she did the summer she met my father.

My mother was very hard-working as a teen. 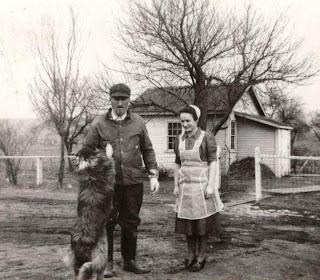 Even though she was the fifth of eight children, all her older siblings had moved out. So, she did the majority of the work helping her parents. She wrote in her diary about all the work she did. She cleaned rooms, did laundry and ironing, stripped wall paper, hung wall paper, and painted. She dug gardens, planted flowers and vegetables, weeded, harvested and canned these foods. She milked cows, helped with hens, took care of peeps. She mowed the lawn, tended flowers and trimmed bushes. When it came time for butchering, she assisted with that task, too. (My mother and her father pictured at right, on the family farm.)

When my parents began courting in earnest, they mostly wrote letters back and forth. My dad worked on a farm, and my mother was either at home, or for a short time in Kentucky working in a home mission capacity. They saw each other only occasionally. In relatively short time of knowing each other, they became engaged, but kept it secret.

My father finally gathered enough funds to be able to attend college. He chose to return to California, a place where he had been very happy. So he traveled to California, while my mother stayed in Pennsylvania. She had not finished high school (because her father opposed education beyond 8th grade for his children). But she was determined to finish. Her brother persuaded their father that they did need to finish high school. So at age 20, she went back to school.
World War II interrupted and changed many plans. While my parents were able to complete their respective educations, they had to alter their wedding plans. Originally, they planned to wait a bit before getting married. However, my father's draft status had been deferred as long as he was in college. If he took a job as a minister, his deferment would be continued. So, they decided to move up their wedding date. 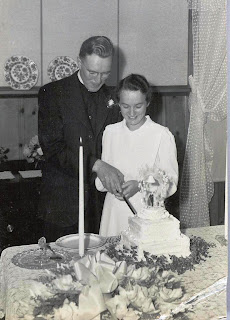 In the summer of 1942, my mother left Pennsylvania to travel to California. When she and her brother were both packing, to leave home as each was leaving home to get married, their mother helped her brother, but not my mother. My mother asked why--and my strict PA Dutch grandmother said gruffly--because he will come home again and you won't. It was true. My parents knew then that they wanted to go into mission work. In fact, before they got engaged, they shared their mutual desire.
So, my mother--who had rarely been further from home on her own than a couple of hundred miles--traveled by train across country. Once in California, she worked in wealthy homes and enrolled in some college courses. My father worked too and was a full-time student.
In October, 1942, they spent the morning decorating the college chapel, and in the evening of October 22, they were married. The reception (pictured at left) was held in his brother's house.
The long distance romance must have worked--they were married for 49 years, and the only thing that separated them was my mother's death.
Posted by KGMom at 6:16 PM

What a lovely story Donna. I can't imagine the bravery it took to get on that train and head to California. That wedding photo is so sweet.

You have a great tradition of education in your family. My father went to grade 6, my mother to grade 8. Crazy, eh?

I didn't know that Grandma said this about your mother leaving home and not coming back. Neither did I know Pappap did not allow your mother to get more that an
8th grade education. Who was the brother who got married the same year? (if I may ask) Liked the wedding picture of your parents. I had never seen it. I am getting the book that your wrote about the Climenhagas.

Carol--the brother in both instances was your dad, Andrew. He was leaving to go to Oklahoma to marry your mom, as Dorcas was leaving to go to California and marry David. I suspect Grandma was especially hard hit because of how much work Dorcas was doing around the house and farm. Grandma was sickly at this time, and in and out of hospital. I was not able to find out what her illness was.

That marriage was definitely meant to be. Can't wait for the installment that tells us about little Donna.

Your mother was very strong to leave her community and to pursue an education and love. She looks lovely in the wedding photo.

Your family history is always fascinating for me.