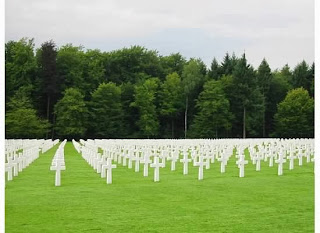 November the 11th is a day for remembering.  Many people in the United States, Canada, the UK, and parts of Europe, those who were former Allies during World War I, remember this day as REMEMBRANCE DAY or VETERANS DAY.

But, there are parts of Europe where this day is not remembered--oh, perhaps remembered but not celebrated.

Several years ago, when we were on a trip through Germany, we visited Cologne.  This lovely city had been heavily bombed by the Allies during World War II.  It is now rebuilt, and even restored in many parts to its medieval heritage.  The famous cathedral stands again in all its imposing glory. 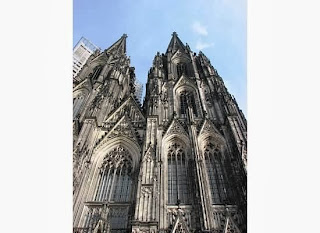 As we walked around town, we passed a store front which was filled with costumes--you know, as in Hallowe'en type costumes.  We asked our city guide if Hallowe'en was popular.  He looked a bit puzzled and then replied--oh no, these are for Martinstag.

Well, he explained--it's like Hallowe'en and harvest festival or Thanksgiving combined. We accepted that--adding a new celebration to our store of knowledge.  And when, we asked, is it celebrated?  He replied--on November 11.

Now, it was our turn to be puzzled.  November 11?  But, that's Remembrance Day, or Veterans' Day, or...Armistice Day.

Once again our guide looked puzzled--so we explained--the end of World War I, the treaty which took effect on the 11th hour of the 11th day of the 11th month.

But, of course, by now it dawned on us that it shouldn't be surprising that the defeated would not celebrate a day when victory came, but so did defeat.

Some people win and some people lose.  On this day, I always remember the sacrifices--those who fight have a cause they believe is right; they have countries they love and die for; and sometimes they are on the winning side, and sometimes the losing side.

In Flanders fields the poppies blow
Between the crosses, row on row,
That mark our place; and in the sky
The larks, still bravely singing, fly
Scarce heard amid the guns below.

We are the Dead. Short days ago
We lived, felt dawn, saw sunset glow,
Loved and were loved, and now we lie,
In Flanders fields.

Take up our quarrel with the foe:
To you from failing hands we throw
The torch; be yours to hold it high.
If ye break faith with us who die
We shall not sleep, though poppies grow
In Flanders fields.
John McCrae, written 1915 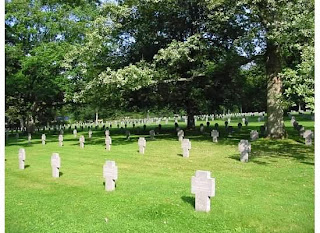 The German Cemetery in Luxembourg (World War II)
Posted by KGMom at 10:33 AM

You know that I was drafted for Vietnam, but did not serve there because I am a CO. Makes some tension for this day every year. But great respect and appreciation for those who followed their conscience and served their country: "Breathes there a man with soul so dead, who ne'er has said, 'This is my own, my native land.'"

Daryl-I didn't recall that you were drafted, but I certainly recall your alternate service. I feel the same tension for this day. I honor those who respond to a duty call, but wish that it weren't so...that wars would cease. Then all could serve in SERVICE for humanity, not just country.

We had to commit In Flander's Field to memory when I was in school.

Something I learned this year is that over 6,000 Americans came north to join the Canadian military before the US got drawn into the war. They risked not being able to return to the US for this. I understand there was a ceremony this year in Washington to honor these Americans who fought with Canada.

Well, that answers that question. Just this weekend I was musing about whether Germany celebrated. I could have googled if I had been near a computer, but then I forgot but the time I was.