More aptly, I should title this blog “The Latest Boycott.”

At the outset, I need to say I am not opposed to boycotts.  It is a time honored way of seeking to bring about change. I have boycotted companies in the past—in particular grapes and Nestlé.
Grapes—the grape boycott was organized in part by Cesar Chavez.  This quote from Wikipedia gives you a quick summary of the grape boycott:

“The Delano grape strike was a labor strike by the Agricultural Workers Organizing Committee and the United Farm Workers against grape growers in California. The strike began on September 8, 1965, and lasted more than five years. Due largely to a consumer boycott of non-union grapes, the strike ended with a significant victory for the United Farm Workers as well as its first contract with the growers.”  (See the whole entry here--https://en.wikipedia.org/wiki/Delano_grape_strike)

You can see both the time frame and the reason for the grape boycott. Workers who did the back-breaking field work were paid an inadequate wage. Additionally, the workers were denied the right to organize a union to represent their interests.

The outcome was that the primary company which had been denying worker rights and paying such poor wages finally relented.  Workers were given the right to vote for representation, and thus the United Farm Workers was established.

This was for me a simple straightforward boycott.  Company X engaged in practices that resulted in harm to workers. Consumers joined a nationwide boycott, and eventually workers won representation and saw their working conditions and wages increase.

Nestlé--The second boycott in which I took part was the Nestlé boycott. In this instance, the main issue was that Nestlé, which made infant formula, began an aggressive campaign to get mothers to eschew breast-feeding and instead switch to formula. There is, of course, nothing at all wrong with feeding an infant formula. There are various occasions in which that is the only option available.

What Nestlé did that was objectionable was to mount a widespread “educational” campaign combined with offering free starter samples.  And the marketing program was not just carried out in those countries where women have the means to buy sufficient formula AND have access to clean safe water.  Formula was touted in developing countries where women had traditionally breast-fed their children.  Child advocacy groups began to assess the impact of the Nestlé campaign, and concluded that in fact the formula campaign might have been the cause of rising infant deaths. (Read the whole description here-- https://en.wikipedia.org/wiki/Nestlé_boycott)

Thus began the effort to boycott Nestlé. I joined that boycott too—OK, so I wouldn’t buy chocolate bars or chocolate mix, or whatever products were marketed under the Nestlé name.

But here’s where things got complicated. Like so much business in today’s global economy, Nestlé is not a stand-alone company. It is in fact part of a huge conglomerate. You can read the whole list here-- https://en.wikipedia.org/wiki/List_of_Nestlé_brands.

Get the picture?  Now, that list is a picture of today’s Nestlé network. But it was no less complicated when the boycott began back in the late 1970s.  Did I stick with my boycott?  Well, yes and no. As much as I could I avoided Nestlé products, but given its tentacles in so many areas, it eventually became impossible to carry out.

However, the outcome of the publicity and attendant boycott was that Nestlé changed its aggressive marketing practices…for a time.  In fact, the practice has not ended completely. And there are on-going efforts to have Nestlé not falsely market formula to women in developing countries without making it possible for the use of formula to be safe and adequate for developing infants. 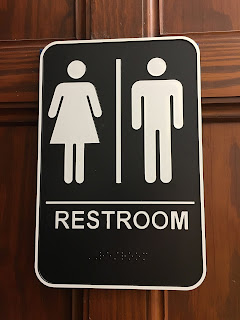 And now, to the present.  The Target boycott.  Here’s one I will NOT be participating in.  What is different?  Well, I suspect you can sort that out.  Suffice it to say, that with grapes and with Nestlé, people’s lives were being hurt by the company practices.

Not so with the Target boycott. In fact, what Target has done—announce an open bathroom policy for transgendered people—has made it possible for some people to live safer lives.

The people boycotting have made various astounding assertions about how THEY will be harmed by this open bathroom policy. I have even read statements that some people plan to be “packing” when they enter a bathroom.  Just in case they encounter a transgendered person. Just so they can “blow them away.”  REALLY? How insane is that.

Perhaps you have discerned the distinction I draw between the two examples of boycotts in which I participated, and this last boycott.  In the case of grapes or Nestlé, my lifestyle was not being harmed. Even though I was not personally affected by what the grape companies or Nestlé was doing, I joined to bring about social change that would make someone else’s life better.

It seems to me the Target boycott is all about the people who are mounting the boycott feeling that THEY are the ones suffering.  Frankly, that just puzzles me no end.  The transgendered person—who uses the bathroom of birth gender NOW—can be threatened and harmed by being in the “correct” bathroom.  And Target’s policy change will “fix” that.  EXCEPT.  Except if some person decides that he or she should NOT be using that bathroom and takes it out on the transgendered person.

Despite all these words I have used to get to this point—this whole boycott leaves me SPEECHLESS.

During the grape boycott I lived in a part of the country where grapes weren't grown, but there were still issues of exploiting migrant labor. My community of faith was all about seeking justice for those being exploited, and I even recall writing a letter to the governor to state my well-formed, eight-year old views! I boycotted Nestle, too. And if I recall, part of the issue was that women were diluting the formula to make it go farther, thereby diminishing the nutritional value that led to infant deaths. Corporate malfeasance abounded!

I don't shop often at Target (just not convenient), but I am inclined to support businesses that respect the dignity and safety of all persons. The maligning of the transgendered community makes me heartsick, and the misinformed and uniformed hysteria makes me cringe.

Target didn't make it in Canada, but good for them for standing up in the face of lunacy. In fact, I think people should consider making a conscious effort to shop at Target even more.

I too participated in the Nestle boycott many years ago, but as you say, it was difficult to do (except for not buying obvious Nestle products like chocolate bars, etc.) because of the many company tentacles that one is usually not aware of. As an aside, but related to the formula issue, I was interested in the most recent episode of "Call the Midwife" (PBS) in which the wonders of formula were being touted in poor areas of London in 1961. The downside of assuming that all women can breastfeed successfully was explored, but there was also healthy skepticism of accepting without question that formula is better than breast milk, which was the impression that companies like Nestle tended to give.

And I too will not be participating in the Target boycott for pretty much the same reasons. The whole bathroom controversy is stupid, to say the least (not to mention discriminatory and mean-spirited). As someone pointed out, wouldn't it be more upsetting and confusing for Caitlyn Jenner to show up in the men's room than the women's?

As with so many things these days, I am also left speechless and sputtering!

I admit to being puzzled by the laws and the controversy surrounding bathrooms and transgendered people. I have wondered, could public places have men's rooms, women's rooms, and then a room with the sign in your picture showing either. Make the third room a private room, like family bathrooms at the airport are. One church where I preach regularly has two bathrooms (we call them washrooms) upstairs -- both with a sign of a man and of a woman, and both able to be locked with one person in them. Downstairs are more traditional men's and women's rooms.

My difficulty is fairly simple. I wonder, isn't there a compromise that we can use even before we all agree on what's going on with "transgendered"? Do we have to finish the debate before we can use the bathroom again?

Like everything else going on that seems so insane, this is yet one more instance of "us vs them" and the fear it instills in people. It's the entire platform of the Trump campaign, and more likely WHY this debate is even happening right now. FEAR. Plain and simple. Loss of perceived control. Loss of majority. It's simply a knee jerk reaction to not being able to stop progressive, inclusive thought in this country. Kudos to Target and Kroger and all those businesses who publicly state that they want to have ALL their customers comfortable and will do what they have to do in order to accommodate that.

Good for Target. I am embarrassed to say that my Home State is North Carolina. Our governor is taking us back to the way it was when I moved here in 1978 ... the hatred and bias is palpable.