The Fall of Icarus

Having come up with a prompt for our group of intrepid bloggers (aka Comeback Bloggers) on the seven deadly sins...I confess to a temporary bit of sloth--not getting to writing my blog. And now the next prompt has been posted.

And NO--sloth is not the sin to which I would confess.

So, here's a quick primer--in early Christian church thought, the church fathers (those jolly guys) came up with seven sins they called deadly, presumably because committing such a sin put one in mortal danger.

As a point of fact, the enumeration of seven deadly sins is extra-biblical. You will not find such a list anywhere. But, certainly there portions of the Bible which highlight some of the seven: lust, envy, greed, sloth, gluttony, anger and pride (or hubris).

While several variations of the list may be found in early church fathers' writings, it was Pope Gregory I who revised and cemented the list into seven. (Thanks, Greg.)

While I could confess to having "committed" most if not all of these, the one against which I personally guard is pride. I like the Greek word "hubris." It is a recurring theme in many of the Greek tragedies, as well as the Shakespearean tragedies. Briefly, hubris is defined as "overweening pride"--pride that goes far beyond being proud of something--your accomplishments, your family...your whatever. The qualifier "overweening" makes this pride something that goes beyond--to be SO proud that you really think you cannot be instructed, that you are far superior to many people, that you are the top, the best, the brightest...add your superlative.

I have been richly blessed in my life--good parents, happy childhood, loving spouse, the world's best children (oops--no, very good children--got to watch that "overweening" thing), and on and on. In addition to this list, I have benefited from a good education, lucky breaks in my career working life, generally good health. It becomes easy to be proud of these things--as though they have come to me because I deserve it.

Ah, ah--caution there for me.  Thankfully for me, there are some literary reminders not to allow one's pride to rise too high.

There is the wonderful Greek myth of Icarus and Daedalus.  The "sin" that dominates is the sin of pride. And the myth is an excellent example of hubris. A mere mortal thinking himself god-like rises too high, either in power, or--as with the myth--too high literally.  And the gods, wanting to remind the mere mortal that he IS mere, smack him down. (Or her... of course...though the classics usually feature men.) 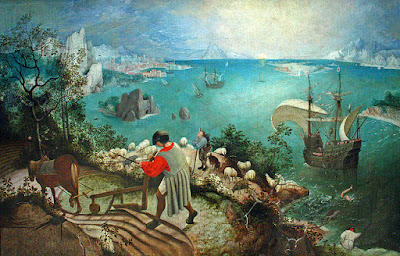 Pieter Brueghel "The Fall of Icarus"

Are you wondering why I included the Brueghel painting, and the W. H. Auden poem "Musee des Beaux Art"? Well, they are both about the fall of Icarus. Can you find Icarus in the painting? And can you figure out why Auden says "About suffering they were never wrong/The old masters"?

When I was teaching, I used this poem and the painting. It was fun to ask the students  first what they saw in the painting. The overall scene is a bucolic one--a ploughman, a clear blue sky, a ship sailing somewhere.  But where Icarus was in the painting?

Once they found him, I would ask--why did Brueghel so place him?

Daryl--to which question?
Why do I include the poem and the painting?
Or finding Icarus?
Or why Auden says...?
Or why did Brueghel so place Icarus?
Be specific.

Do you miss seminar classes with me?

I had always pictured hubris as more than extreme pride--rather, it is outrageous arrogance. One of the best examples in Greek myth (and there are many) is the tragic myth of Niobi. Niobi had 14 children. Because she had so many children she believed she was superior to the God Leto, the mother of Apollo and Artemis, who only had two children. Needless to say all of Niobi's children promptly died/were killed (because bad things always befall those who show hubris in ancient Greece). The maxim "know thyself' inscribed on the Temple of Apollo at Delphi speaks directly to this specific kind of hubris--know that your are mortal and not a God.

Well, this is kind of hard on an old brain, but maybe I am too slothful to exercise the grey matter. He probably said it just to be cryptic or to appear smart or to confuse the world. But I suppose that the old masters understood life and that suffering is intense and personal but otherwise life goes on for the rest of us.

Hello James--
yes, I agree with your view of hubris. To me the word "overweening" means presumptuous. Pride which assumes that you have or are all that you do because YOU deserve it, that it is as a result of your personal achievement. In tale after tale from the ancient Greeks, we see how some "mere" mortal presumed to be on a level with the gods, and the gods smacked each of them down to size.
The Bible also has such stories--beginning with Adam & Eve. They presumed to be on a par with God, per Satan's temptation.
I have always like the Christian liturgical reminder--"remember, o man, that thou are dust, and to dust thou shalt return."

I also love the word "hubris." It defines something so expertly that no other word quite attains. (As in the hubris of DJT.)

The professor of my college art appreciation course spent a lot of time on this painting. I love it and see so many different things each time I look at it.

But no matter how much I have learned about it, the painting always says to me the Proverb, "Pride goeth before destruction, and a haughty spirit before a fall."

Followed by the ear worm "Children" by Joe South.

Wow...I wish we were all together and could discuss it. You would be the leader, that's for sure.