Now, this is not a simple process. In fact, I have moved the bookshelves out and back several times in the two decades they have been sitting in that corner. A while back, we had a cat who decided that corner was prime litter box territory, ONLY he consistently did not go IN the litter box. So, I was always scrubbing the carpet back there. (Turned out, the poor guy was suffering from chronic renal failure, and eventually died). I have also moved these bookshelves when the carpet cleaning guy comes once a year to steam our carpets.

Well, I went at the task. 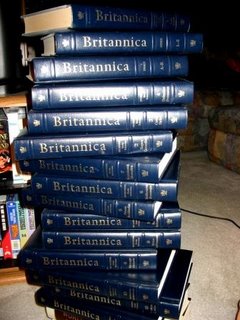 Removing all the books from the shelves, stacking them into leaning towers of learning, dusting everything off, and replacing them on bookshelves. In the process, I discovered the critical mass of stacking--books can only go so high until they fall, Jenga like, off the pile on to the floor.

But, when they are safely back on bookshelves they look grand. 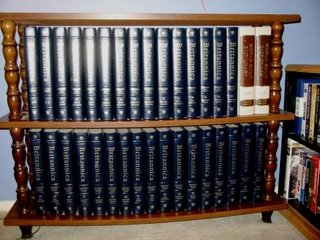 But, as I completed this task, I began to contemplate. Why, precisely, do we have an entire set of Encyclopedia Britannicas? And why do we have, right next to that bookshelf, the second shelf with a full set of Great Books. I confess that, while I have read many of the authors whose works appear in the Great Books series, I have NEVER read through one of the volumes. I don't know if it makes me feel more learned to have the set in the family room or not. Can knowledge be transmitted by osmosis? Do the words float around the room waiting to be inhaled, and then to migrate, stem cell fashion, to the appropriate regions of my brain?

Several years ago, when I was on another cleaning tear, I decided to get rid of another complete set of books we had that, since our children were grown, we no longer used. I began looking for a place to donate these books. Frankly, I am constitutionally unable to throw out books. There is something far too sacred to printed words for me to think that books are disposable. So, I lit upon the idea of sending them to Africa. I did Internet research, and finally found that the University of Ghana, in Legon, Accra would accept them. I boxed them up, several boxes worth as they had to be below a set weight, hauled them off to the Post Office and sent them book rate across the ocean. I never heard if they arrived, but assume they did.

Now, as I look at the set of Encyclopedia Britannicas, I wonder what will become of them. Knowledge changes or is added to exponentially so fast. I recall a sniblet of information that said that, in general, knowledge is being replaced every five years. Whew! So, college students choosing majors really need to learn how to keep learning. There is no way they can train for something with a body of knowledge that will never need to be refreshed. Our set of Britannicas is way outdated. In fact, the next time I want to know something quickly, I will run to Google or Wikipedia. (I admit I don't let my students use Wikipedia as a cited research source, but I do tell them they can start there.) So the lovely blue set of Encyclopedia Britannicas languish.

But just now, they are well dusted, nicely rearranged, properly situated in the corner of the family room. And next to them, is a comfy peach colored recliner. With a reading lamp. With a freed electric cord. 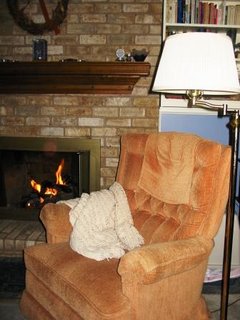 That looks very nice and comfortable! We bought a set of World Books in 1993 for our daughter and after using them for a few years, internet options were there. So I donated them to the high school where I worked. This subject reminds me of a story about a set of encyclopedias my Mom and Dad had, vintage 1966. In the 80's, my Mom decided to donate them to an elementary school and they took them off her hands happily. When my Dad learned about it, he nearly had a heart attack since over the years, he'd put twenty dollar bills in those volumes - rainy day money, totalling about $700. The next morning, guess where my Dad was?

Oh I understand about not being able to throw away books!

My father bought a set of the Great Books, which he kept in a beautiful barrister bookcase, that sits in storage since he passed away.

I would love to have those books! Not really to read them, just to have them, but there's no room in my tiny house. So they sit in storage until we figure out what to do with them.

That spot by the fire looks very comfy and like the perfect place for a nap!

Oh, Mary--the story about your dad's hard earned money being put away bit by bit to purchase encyclopedias and then your mom giving them away--what a bittersweet story.

Laura--maybe someday the barrister bookcase and Great Books can grace your home!

kgmom - Thank you so much for the 'heads up' regarding the font problem on my blog. I try to get creative and look at the trouble at make myself.

Curiously, it too is about 'throwing away'. I'm sitting here now looking at shelves of books that I know we'll never read again. It's just so hard to say good-bye.

That's a very cozy picture and a job well done.