One of the advantages of my being a member of the national advisory committee for PDA is that I get to see various parts of the country. True, where we tend to go are those places where disaster has struck.
I have spent the last several days in San Diego, California. Exactly this time last year, they suffered devastating fires, and we were here to see the recovery efforts that have been taken by local Presbyterian churches. It is truly heartening to see how many just plain good folk there are out and about.
Just as with my visit to New Orleans last October, I was not on a trip to be a tourist. So, I by-passed many of the sights to see in San Diego. Oh, sure--we traveled around the area, but in each case we were going to see people whose lives had been devastated by the fires. 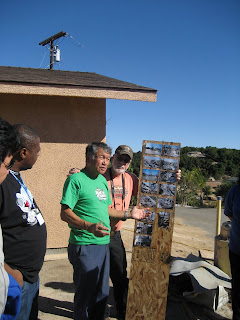 Today I will tell you Tom's story. He was born in Japan, but came to the U.S. decades ago. Just 2 years ago, his daughter and her family came to live with him. Last year's fire destroyed Tom's American dream. He lives in the environs of Ramona, CA. When the fires started, he kept watching and thinking--it won't come here, it won't come here. His house had a commanding view overlooking a valley. 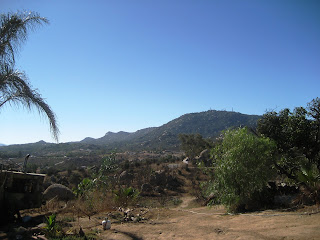 With his daughter and her family safely away, he watched to see where the fires would go. Just as with each of the people we went to see, Tom said--suddenly the fire was there, virtually all around. He jumped in his vehicle and drove for safety. When he was able to return, everything was gone. 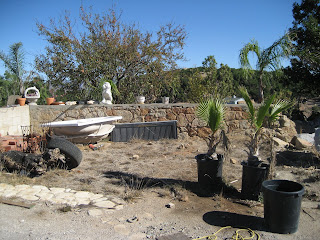 In helping him recover, the local church built a garage for him. Tom works as a handy-man repairing various machines. So, he not only needed a place to continue his work, but also to store his tools. The church also built him a tool shed--in fact, a shed is the first thing they build anywhere. A shed is small enough it doesn't require a building permit; it can be locked, and thus provides a place to store property. Sadly, looting is a post-fire problem.
Tom was so moved by the help of the church that he now goes along with them, volunteering and rebuilding other people's lives. 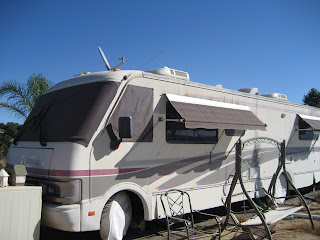 Tom's house has not yet been rebuilt--he hopes that will happen soon. Meanwhile, he has been living in this RV home, while his daughter and her family live elsewhere.

More stories in future posts.
Posted by KGMom at 12:32 PM

Tsk tsk. Out there helping others? What would Jesus say?

There but by the grace of God...
I hope Tom and others can find a way to start over and focus on the important fact that they, and their families, are OK. I just can't imagine it.

What a moving story...of Tom and of you for helping those in need. Kudos to those like you who actually walk the walk instead of talking it.

Hey, KG Mom! You were/are in my home territory--except that I'm not there this year, but in northern California! I had to drive near Ramona on my way to Dirty Little Desert Town last year. I remember the fires well: They were terrifying! Blessed are all those who lend a helping hand to those whose lives were changed by the fires.

Hi Donna,
I think it's so awesome that you are able to travel around and help others after a disaster. Many thanks for doing that and inspiring the rest of us to do what we can.

Thank you for sharing Toms story. Some people are just good all the way through. You and Tom, are an inspiration. Let's hope your lead is followed by many.

Oh, man, I feel terrible to grumble about anything!